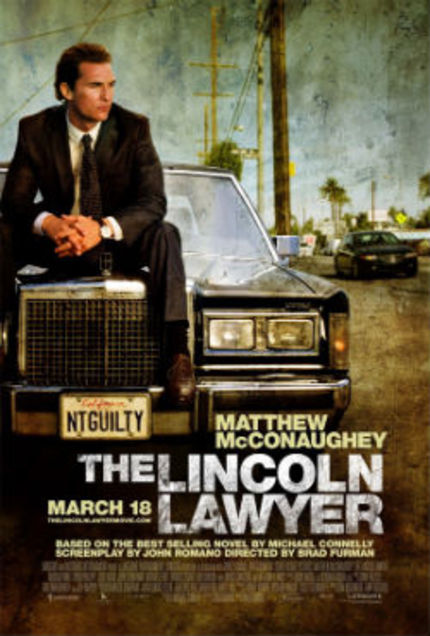 Movies like The Lincoln Lawyer are comforting. They're like a nice, tasty peanut butter and jelly sandwich: you know exactly what you're going to get, and as long as the simple sandwich is constructed and delivered with a minimal degree of care and effort, then the recipient should be more than happy with the experience.

Which is another way of saying that Brad Furman's The Lincoln Lawyer is a dash of Grisham and a slice of To Kill a Mockingbird, whipped into a piece that feels like a well-shot two-hour TV pilot for a fancy new courtroom series. None of that is meant as a knock; if The Lincoln Lawyer was a weekly TV series, I'd probably watch it.

Our semi-hero is a very clever and plainly shifty defense attorney who seems to have no qualms about defending the lowest of the low -- but since he's played by the always amusing Matthew McConaughey, we can, of course, expect Mick Haller to have an earnest soul hidden beneath his cocksure swagger. (And the actor has a lot of fun with the role, be it the lighter quips, the standard boilerplate dialogue, or a few quietly effective dramatic scenes.) The title refers to the fact that Mick works out of his Lincoln; yes, his office is actually his car. But Haller is clever well beyond his station, which is how he becomes embroiled in a high-profile sexual assault case that reaches into the pocketbook of an outrageously wealthy family.

Needless to say, Mick also has A) an estranged wife, B) a lovely little daughter, C) a few colorful allies on various levels of the judicial system, D) some serious guilt about old clients he may have shafted, E) a minor disagreement with an entire gang of bikers, and other fun diversions that pop up here and there. And despite an ensemble supporting cast that boasts great players like William H. Macy, Marisa Tomei, Ryan Phillippe, John Leguizamo, Frances Fisher, Bob Gunton, Josh Lucas, and Shea Whigham, the success of The Lincoln Lawyer resides solely on the shoulders of McConaughey. Furman's direction is (mostly) crisp and (generally) expeditious, and John Romano's screenplay, based on the book by Michael Connelly, doles out more cleverness than convention, but without McConaughey's confident, conflicted, humane performance, the movie would feel a whole lot more like a TV flick -- albeit one with a really great cast.

I often have no problem praising a good, old-fashioned piece of familiar filmmaking, provided it brings a little new spice to the table. Generally I'm talking about monster movies and psychological thrillers of some variety -- but that rule definitely holds true for well-mounted and simply entertaining courtroom dramas like The Lincoln Lawyer. Fans of well-regarded gavel-pounders like Jagged Edge and Primal Fear will probably find a smoothly good ride from The Lincoln Lawyer. It's not exactly Sidney Lumet's The Verdict, nor does it re-invent the wheel of its particular sub-genre, but who says it needs re-inventing in the first place?

More about The Lincoln Lawyer