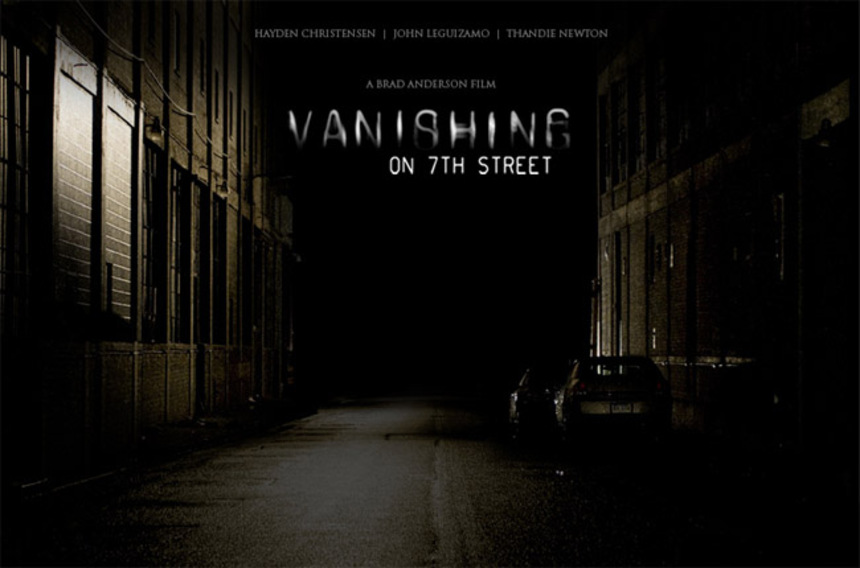 Brad Anderson's latest film is a bit of an odd beast. It is a creepy film that is not all that creepy while watching it. It is a apocalypse survivor film where no one is going to survive. The villain is darkness itself, the relentless and unstoppable enemy. Or simply the indifference of the universe. The bleak overall tone, that in no uncertain terms indicates that we all will in fact die, eventually, will for some make The Vanishing on 7th Street a basic genre picture that allows for some post-viewing contemplation. Some will be angry that the film is repetitive and pointless. I am in the latter category.  Even in a festival environment, with many films a day, this one has a little staying power for its sheer portentousness. By showing the banal repetitiveness of the main characters avoiding 'the shadows' and looking for light, any light, is bound to turn a lot of people off. But hey, humanity has been doing this for years, so why not show it in an American genre film instead of an existentialist Scandinavian art film? The Vanishing on 7th Street is actually a Scandinavian art film in disguise. Despite the current fad of Zombies Zombies Zombies everywhere, the Vanishing on 7th Street is the closest thing I have seen to the original Night of the Living Dead to come along in a while. The dysfunctional mixture of class, race and age, here Hayden Christiansen, Thandie Newton, John Leguizamo and 14 year old newcomer, Jacob Latimore are a few of the last surviving members in New York City (and presumably the planet) after a mysterious Darkness engulfs the planet and 99.9999% (give or take) of the population disappear.

The film offers no direct explanation why this is happening, even though Christiansen's character is a local newsman, there is little news-footage exposition on the even, there is no time and nobody to do it in the face of such a dire situation. Is it the Christian Judgment Day?  There is a glimpse of the disappearing Colony of Roanoke in an open book in the early minutes of the film.  There is even the possibility of a quantum malfunction of the universe, the whole shebang is simply closing up shop. Not because we did something wrong, or are worthy of punishment, but simply because it is. Either way, the rules seem to imply that proximity to light can stave off the inevitable for a few additional brief moments and the run-time of Vanishing at 7th St. are in fact those few minutes. I suppose our dysfunctional remnants of humanity could have held up in a hardware store with a few Coleman lamps or other form of fire (batteries and electricity are pretty much dead from the unexplained initial incident) but this is not that movie. It is more a panicked clinging in the dark until everyone is engulfed. In the age of jump scares and quick-bang horror, it is interesting to see one that approaches 'horror' as banal repetition, and actually makes things a bit more scary. Perhaps this is as close to a spiritual remake that of Kiyoshi Kurosawa's Pulse that American audiences are going to get.  Brad Anderson has yet to make a masterpiece, and this is sadly not quite it either, but he has made several solid and interesting genre pictures including Session 9, Transsiberian, and The Machinist in between directing HBO prestige TV episodes. I quite like his consistent low-key approach to horror cinema. In the current day and age of 'more and MORE is more' some times less is more.