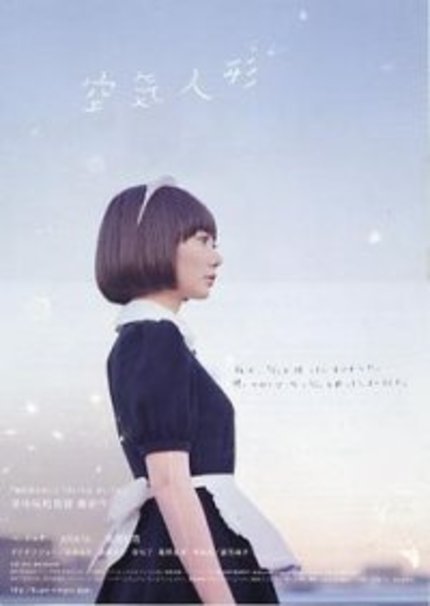 [A bit of a divisive film, Kore Eda's Air Doll is being shown on the big screen at Fantasia, and here is Niels' very positive take on the film.]

When I first heard Koreeda was going to do Air Doll I was extremely pleased to see him return to what he does best: magical realism a la Japonais. Even though most Koreeda fans seemed a little weary of his latest experiment it turned into one of those projects just destined to be awesome. Air Doll sees Koreeda return to optima forma, giving the somewhat slacking Japanese drama genre a welcome kick in the butt.

Ever since I watched After Life (Asian film releases are completely random over here) I've been a big fan of his work. His other films didn't manage to evoke quite the same emotions for me, but if anything Koreeda consistently delivers quality work. His films radiate a level of humanity that is quite unique but when coupled with a fantastical premise his work really starts to flourish. Hence my excitement when I heard he was going to adapt Air Doll (originally a manga).

The premise of Air Doll is not that wild as some would like you to believe. A doll coming to life is hardly revolutionary, especially if you're somewhat familiar with Japanese fixations. Be it dolls or robots, the birth of non-human life is a recurring theme in fictional Japanese tales. From the childish wanderings of Astro Boy to the philosophical meanderings in Ghost In The Shell:Innocence, the search for souls in inanimate objects is a beloved and often explored subject.

Air Doll plays like a mix of Video Girl Ai and Lars And The Real Girl. One fine day Nozomi, a sex doll, wakes up from her rubbery existence and finds herself with a heart. While her master is out working she starts to explore the human world and ends up spending her days in a local movie rental shop. Life as a human turns out to be a little harder than expected though, especially when running into more complex emotions like love.

I don't think I've ever seen Koreeda's dreamy visual style executed this wonderfully. The camera work is perfect, floating through typically Japanese settings at a leisurely pace, mostly observing, sometimes even wandering a little. The visuals emit a certain quiet and peaceful atmosphere almost unique to Japanese dramas, though not often executed as well as here.

The soundtrack is handled by World End's Girlfriend, no stranger to fans of the more alternative music circuit. It flows very well with the atmosphere but it's hardly subtle and can be a little present at times. This is not a problem if you like the outcome, but I imagine the score could become a bit tedious for people with less appreciation for WEG's work. At least Koreeda deviates from the normal piano-infused soundtracks usually present in Japanese dramas, which is a definite plus for me.

Acting is strong though that shouldn't come as a surprise. Koreeda is always capable of drawing great performances from his actors, Air Doll is no exception. Bae in particular does is perfect job of playing the come-to-life doll, her scenes together with Arata are without a doubt the high point of the film. A few welcome cameos (Terajima! and Odagiri) are the icing on the cake. Koreeda manages to keep a light atmosphere throughout the film though the core of Air Doll is not all that happy or positive. Obvious parallels between the emptiness of the doll and human beings can't be avoided, but Koreeda's observations go beyond that. His message could've been handled with a little more care and subtlety as Koreeda is quite direct in what he wants to say, though most of that is countered the lighter atmosphere and it never becomes bothersome.

Story progression is pretty predictable and obviously not a big priority. You can pretty much see from the start where it is going to lead you, still the ending awes and left me in a trance, not ready yet to leave the characters and the film behind. It's a beautiful finish even though it could've been integrated a little better with the rest of the film.

It's a tough choice deciding whether it's Air Doll or After Life that ranks as my favorite Koreeda film, but I'm glad he finally cashed in on the potential he showed in After Life. Most people will prefer his more down-to-earth dramatic work and that's fine. I'm glad he's going in a more fantastical direction as he can create a lovely niche of his own there. And I'll be there to support his work no doubt.