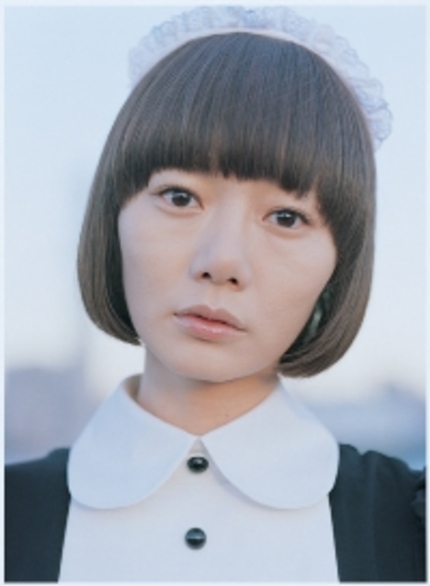 [Our thanks to Moko for the following review.]

An uninformed moviegoer may read the initial premise of Air Doll and think, "Wow, a Japanese movie about a sex doll that comes to life? That MUST be zany! There's absolutely no way that could be - I don't know - some sort of meditation on the human condition that whiplashes back and forth between charming comedy and mind-throttling scenes of urban despair! I mean, she can float!" And that, of course, is where they would be wrong - the sex doll in question doesn't actually float until pretty far into the film, and then only the once. Oh, and also, yes, it is a meditation on the human etcetera. If you're not ready to watch the juxtaposition of how much joy life can bring versus the quiet lives of desperation that people can fall into, please, for your own good, watch something else. And I say this in the course of actually recommending the film itself.

The basic premise, of course, is wacky. Nozomi, a sex doll played by Bae Doona (The Host, Sympathy for Mr. Vengeance), simply becomes sentient one morning, puts on one of the numerous costumes her owner has purchased and emerges from his tiny apartment to explore the world. By day she works at a video store with Junichi (Arata), a quiet ikebana enthusiast, with whom she falls in love. It's a situation that could easily be a Farrelly Brother's comedy, if made in Hollywood, and there are a few moments when director Hirokazu Koreeda goes for what seems like the obvious gag - when Nozomi mistakes the seams in another woman's stockings for the plastic seams that run up the back of her own - before tying it in to the larger plot. But the entire film is marked by a steadfast refusal to make easy jokes.

Nozomi's owner, a waiter at a chain restaurant, is socially awkward, passive-aggressive and a jerk in the sad way that sometimes stems from those difficulties, but he's not a cartoon. Likewise, throughout her travails, Nozomi comes across a cavalcade of shattered people, doing their best to pretend like nothing is wrong - people who are "empty" emotionally in the same way that Nozomi is empty physically. The whole thing is pretty emotionally devastating, even before a pretty rough third act, and whether or not you find the ending upbeat after all of it is probably largely dependent on what sort of person you are. If you're already not feeling relatively okay about the human experience and the possibility of really communicating with any other person, maybe take a pass on this one.

Air Doll is beautifully shot, well-acted and, although I can understand the complaints coming from some quarters that the film itself is too long, I didn't mind the pacing - if something is as beautiful and thought-provoking as this, I can spare a few more minutes to let everything unwind in its own time. I can't suggest that you should watch it alone (as I did); it may be best to watch with some close friends. It may not, however, be the best suggestion for Zany Japanese Movie of the Week Club if it's your turn to choose.