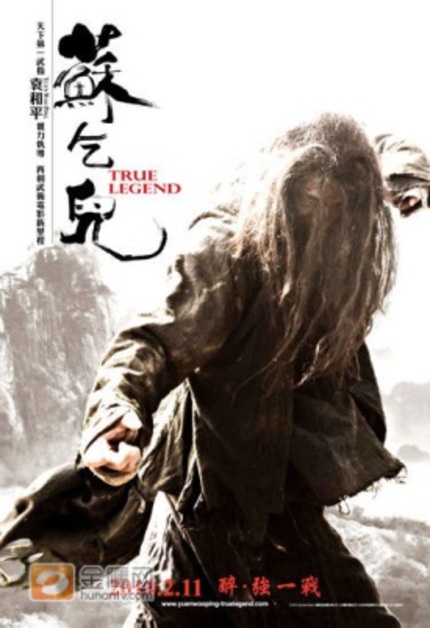 If you still don't believe Hong Kong has revived its glorious early 90s cinema, Woo-ping Yuen is here to deal the final blow to any remaining doubts. Lee's 14 Blades and Ng's Tracing Shadows only served as preludes to Yuen's True Legend, a film that lets you forget 15 years of cinematic progress and transports you right back in time.

Maybe you don't recognize the name of Woo-ping Yuen, but chances are you've come across his work at some point. His efforts as action choreographer on The Matrix granted him world-wide recognition, though fans of Hong Kong cinema didn't need the Wachowskis to get acquainted with his work. Yuen is Hong Kong's most famous and lauded action choreographer and responsible for some of the most amazing martial arts sequences ever seen on screen. His latest directorial feature length effort dates 14 years back, making this a pretty remarkable comeback.

Stylistically not much has changed for Yuen. Even though True Legend shows updated techniques, visual effects and sound design, the core of his film feels extremely familiar. From the settings, the action choreographies to the dramatic complications, fans of the genre will feel right at home. Only the split in different acts hints at a more modern approach.

The film is staged in three parts. A short intro, the main act and a rather lengthy outro. All three segments show a different phase of our hero's life, creating a somewhat disjointed feel as both intro and outro could've been left out for the sake of the storyline. On the other hand, they result in a broader and more appealing view of our hero which is somewhat novel for a martial arts flick. But whatever its impact on the story, both segments provide some awesome fight scenes, so who cares really.

Yuen hasn't lost much of his visual flair. Expect lots of wire-fu antics, smart and tactical camera work and bold, expressive camera angles. It's clear though that Yuen doesn't need as many cuts as before to make the fights flow well, giving his film a more fluent feel. CG can be a little intruding at times which is a shame. Luckily this is mostly during in-between scenes so they never get the chance to screw up any major fight sequences. The intro and outro animations on the other hand are stylish and pretty atmospheric.

Sound design is one of the fields where these revival films clearly improve on their ancestors. The musical score features some classical Chinese music which is nice and fitting but hardly remarkable. It's the sound effects during fights that have a way bigger impact than before, making the fights all that more engaging. Acting is pretty solid too, with Chiu putting on a pretty impressive martial arts show and Zhou taking care of the more dramatic moments. Her talent is a little wasted on films like these, nonetheless it's quality work.

The only thing I'm missing here is some comedic interludes. Even though the fight sequences are usually the high points of films like this, I've always had a soft spot for these everyday martial arts scenes (like cleaning a room or hanging the wash). They seem remarkably absent in favor of more dramatic resonance. Not really my preferred choice as it can get a little too serious while all the wire-fu action doesn't really invite this grave atmosphere.

That said, the martial arts fun is simply too big to ignore or to be spoiled by little qualms. Yuen still has plenty of adrenaline-inducing magic left to fill a film with superb action scenes. From the mass action scene at the start to the drunken antics at the end, martial arts fans will find lots to enjoy here. With True Legend Yuen proves he has plenty of creativity left to make a couple more of these films, and I won't be the one stopping him.

The 3-way story split might be a bit of a gamble, but looking back I actually enjoyed the extra depth it brought to the film. It's not much, but it makes True Legend a little more than a simple rehash of the old days. Comparing it to 14 Blades, True Legend is a little less impressive and not as big an upgrade, but apart from that it's an extremely entertaining martial arts film. Yuen fans rejoice.