First Footage for THE LEGEND OF CHEN ZHEN 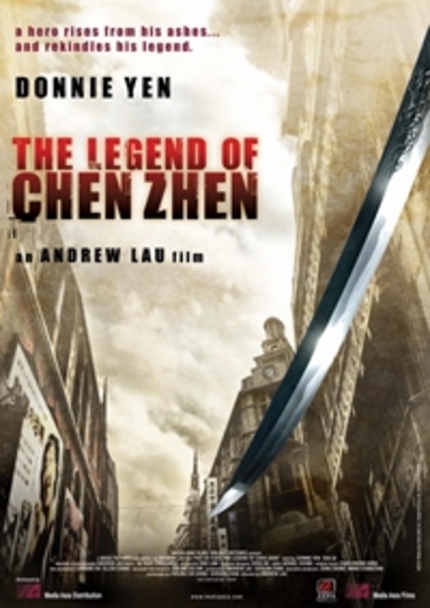 China Central Television (CCTV) aired our first brief glimpse to Andrew Lau-directed/Gordon Chan-produced martial arts film The Legend of Chen Zhen, giving us some idea on the action set-pieces from lead actor/action director Donnie Yen.  I initially caught wind of this video at the Filmsmash forum and someone mention its The Green Hornet, Blood Brothers and Assembly all rolled into one.  Yep, I couldn't agree more.

While China is traumatized by military cliques during the Warlord Era in the 1920s, Shanghai is the cynosure of all eyes. People see it as both Hell's Kitchen and Heaven's Gate. One of the city's most memorable heroes has to be Chen Zhen, who single-handedly avenges his mentor's death by killing all the Japanese at a dojo in Hongkou, only to be showered with bullets while making his legendary flying kick. Vanished from the public eye ever since, he has been taken for dead though his body is never found.

Seven years later, a wealthy entrepreneur called Koo returns from abroad and makes a grand entrance on the Shanghai social scene by befriending the notorious mafia boss of the city. This mysterious man is none other than Chen Zhen in disguise who dwells in a world of nefarious means in order to infiltrate the criminal empire. He soon discovers a clandestine collusion between the mafia and the Japanese.

Disguised as a caped crusader at night, Chen sets out to dismantle with his martial arts skill the evil collusion that plagues the country. One of his foremost missions is to ferret out the assassination list prepared by the Japanese.

The theatrical release date in Hong Kong is on October 1st.  You'll find the preview footage embedded below.