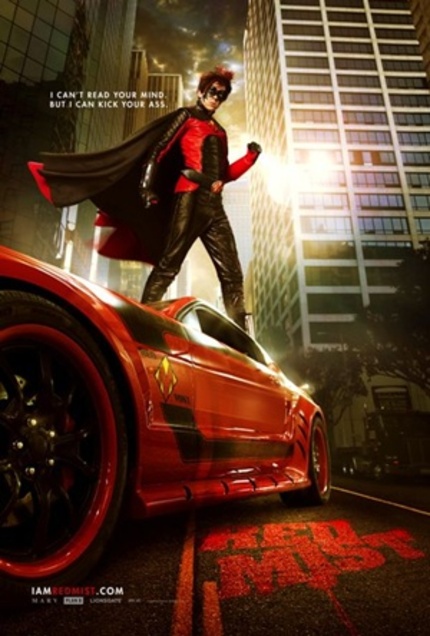 Footage from Matthew Vaughn's independently produced adaptation of Mark Millar's Kick-Ass comic created a strong buzz at Comic-Con in 2009. Lionsgate picked up the film a few months ago, but little information has emerged beyond a lackluster trailer and some posters. The studio decided to test the waters by showing a rough cut, which was not color-corrected, at the 11th annual Butt-Numb-A-Thon in Austin, Texas. The screening was interrupted by sound problems, but that did not obscure the fact that Kick-Ass is an ultra-violent superhero homage that lives up to its name.

Dave Lizewski (Aaron Johnson) is a typical high school nerd who loves comic books and has no luck with girls. After getting robbed one too many times by thugs, Dave decides to carry through with an idea of becoming a superhero. After pulling together a costume from a crappy green wet suit and work boots, he starts a muddled journey as a homemade superhero named Kick Ass. Dave isn't the only vigilante in town, though. The father-daughter team of Big Daddy (Nicolas Cage) and Hit Girl (Chloe Moretz) are already on the prowl. Whereas Dave is an amateur, Big Daddy and Hit Girl are like a paramilitary version of Batman and Robin. Big Daddy wears a Batman-style costume, but instead of speaking in a Christian Bale growl, he sounds exactly like Adam West from the old TV series. Hit Girl is an little assassin with an X-rated mouth who dispenses justice in an extreme fashion All three heroes have a common enemy in Frank D'Amico (Mark Strong), who is a ruthless gangster behind much of the crime that plagues the town. Frank's geeky comic-loving son Chris (Christopher Mintz-Plasse) whose fantasies run towards the more villainous side.

The setup is straightforward and a bit underwhelming. However, once all the characters are in play, the movie picks up an energy that just builds and builds. Unlike the serious strain of big Hollywood superhero movies like Watchmen and The Dark Knight, Kick-Ass is solely interested in action and mayhem. The engine behind the mayhem is Chloe Moretz, who basically steals the show as a miniature killing machine. As previously mentioned, Kick-Ass is violent, and the film always seem to place Hit Girl in the middle of the hardest violence. She is shown gunning people down, shooting them in the face, cutting off their legs with swords, and stabbing them with knives. Casting such a young actress in this role may seem questionable, but this character is part of the overall risk taking that gives Kick-Ass its edge. Stylistically, Kick-Ass is designed as an homage to comics and genre films. The film is layered with numerous references to superhero movies, action movies, and even spaghetti westerns. The soundtrack is splattered with driving rock, pumping beats, and some classic soundtrack music (e.g., The Good, The Bad and the Ugly). The rough cut even contained cues from both the Superman films and Hans Zimmer's score for The Dark Knight, but this music will not appear in the final version.

Kick-Ass delivers exactly what many genre fans are aching for. Lionsgate's marketing program really hasn't hit this point home, though. More buzz screenings should be on the studio's agenda before the official April release because Kick-Ass is a wild (and ass kicking) movie that needs to be seen.