KICK-ASS: A Portrait of the Artist as a Young Batman 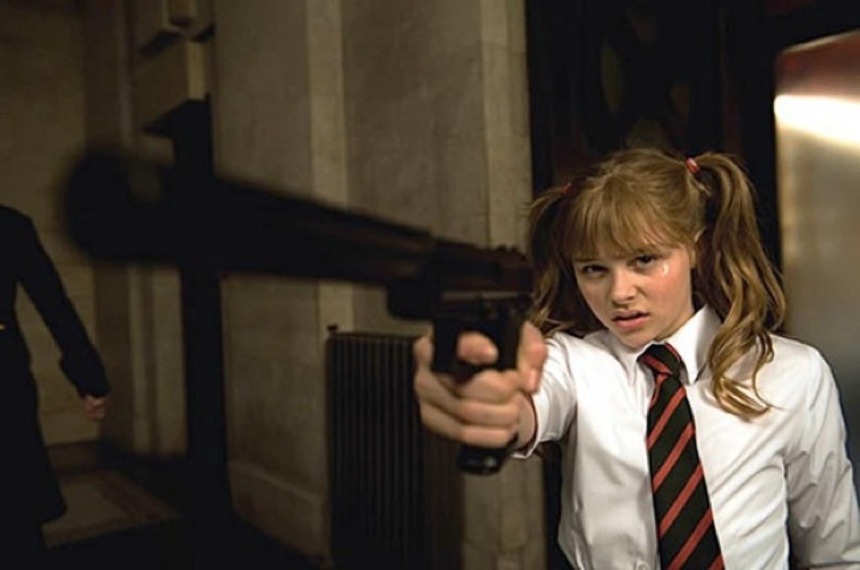 What you'll talk about after seeing KICK-ASS can be summed up like so: Hit Girl. In the new ensemble superhero film, Chloe Moretz plays Mindy Macready a.k.a. Hit Girl, an eleven year-old trained in the deadly arts by her father Damon (Nicolas Cage.) We meet Mindy at the end of dad's sights. He's firing at her with a handgun, he says, to prepare her for the real thing - and he promises to take her for ice cream after.

Some will say the sight of a child committing murder is disturbing. And that would only be a testament to, you know, their decency. Me, I guess I'm indecent, or indecent enough not to be alarmed by the sight of Hit Girl in action. What I didn't appreciate was that the character of Mindy/Hit Girl gets less interesting, and her sadist shtick less enjoyable as it grows clear that KICK-ASS has no purpose for her except as an itsy-bitsy Batman. Not only is she at no point forced to question or doubt her orthodox superhero upbringing, but the fact that Mindy's a child is effectively ignored by nearly every character she comes into contact with. Subsequently, there's not a moment in this movie in which this eleven year-old seems eleven years old in any way.

That's fair, I guess; director Matthew Vaughn doesn't treat Mindy as an actual kid so he won't be mistaken for playing a child-avenger straight. Unfortunately for Vaughn, his film's main character isn't Hit Girl, it's the would-be teen hero called Kick-Ass, who doesn't seem to exist in the same universe as Hit Girl. The contrast between its two protagonists begs some basic questions of, and reveals some basic problems with KICK-ASS:

For starters, where, exactly, are we? Opening narration tells us that superheroes are, and always have been, limited to comic books. We're in the real world, or at least it's real enough that only an idiot (or teenager) would ever aspire to become a superhero. Enter Dave Lizewski, teenage idiot. Buying a wetsuit on the internet and taking to the streets as a costumed vigilante, Dave resembles a true kid: his ambitions exceed his abilities. In an early scene, he's savagely beaten in the line of hero duty, and though he survives, Dave never hardens into any kind of killing machine, never takes his revenge... The revenge plot, naturally, is saved for the little girl, and perhaps necessarily, it's totally absurd. But absurdity requires balance in any story featuring sympathetic protagonists, and KICK-ASS doesn't get it right. Hit Girl and Kick-Ass seem to be playing by mutually exclusive sets of laws - both moral and physical. She back-flips off of one goon while sniping another, racking up a body count to rival The Bride herself. He, by contrast, nobly flails and... shows stamina. Where exactly are we?

As young Mr. Lizewski/Ass, newcomer Aaron Johnson suffers from persistent adolescent croaking. Though Lizewski is a sort of self-aware comic book-reading Peter Parker, he pales when compared to Tobey Maguire as the man-boy himself, in part because Johnson plays it too close to Maguire. He's earnest and wide-eyed, when more cynicism and bite could have drawn attention away from his character's basic lack of change and sacrifice. (Peter Parker's got him beat by a long shot there...) Villain duties fall to Mark Strong, who makes his Lumber King Frank D'Amico menacing without making him memorable. Perhaps you saw Mr. Strong as the villain in last summer's SHERLOCK HOLMES, and wondered 'hey, who's that guy?' Well, with Mr. Strong playing the heavy not only here, but also in the upcoming ROBIN HOOD and GREEN LANTERN, be prepared to continue wondering 'hey, who's that guy?'

1980's up-and-comer Elizabeth McGovern appears as Dave Lizewski's mother, and dies on-screen without a single line. Add that to her turn as Perseus' mother in CLASH OF THE TITANS, and that's two movies this month in which she's played a mom killed off in the first five minutes... As ex-cop turned Big Daddy, Nic Cage has good fun as usual, but Christopher Mintz-Plasse proves the biggest surprise of the film. He's goofy and great as Chris D'Amico, heir to the Lumber Kingdom. He is also the only character in the film who exhibits any emotional transformation. A scene in which he and Kick-Ass cruise Times Square singing along to Gnarls Barkley's 'Crazy' is the film's best, because it embraces the promise of what KICK-ASS is about at its core: socially-awkward kids, having fun in costume.

Hey, fun's fun, and so's this movie, but considering the glut of superhero cinema out there and soon-to-be out there, one would hope KICK-ASS, with its 'R' rating and counter-cultural mandate, might have the nerve to satirize. But for all the underage swearing, KICK-ASS (ha, "ass,") is never as subversive as it ought to be. Sure, it teases subversion of the superhero as in that early beat-down scene, but in no time, the film resorts to action cliché, culminating in (er, SPOILERS) two back-to-back sequences in which Hit Girl mows down rooms of armed henchmen, like Neo in the good part of the good MATRIX. So what if she's in pigtails? Been there, done that.

The finale finds Hit Girl and Kick-Ass duking it out with baddies in separate suites, and separate realities. And though Hit Girl does come close to being squashed, (a scene some will probably find repulsive, but who cares,) her survival's not in doubt, because this film has long since abandoned any pretension to boldness. In the end, Hit Girl is alive and game for more ultra-violence - and another adventure waits in the wings. That's true to comic books, perhaps, but in its adherence to franchise-friendly convention, KICK-ASS doesn't deliver on its potential to stand out from the comic book movie crowd.