Is this movie here to KICK ASS or chew bubblegum? 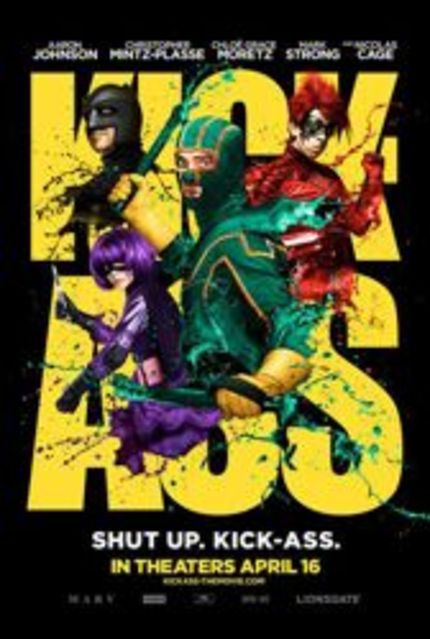 It's been described as Superbad (2007) meets Mystery Men (1999) and while there's some of both those films here  the description is still misleading. Yeah on the surface this movie is foul mouthed and sexually adolescent and it's also about a bunch misfits who fancy themselves as real-life superheroes. But the real resemblance to those two films lies in this films heart. Kick Ass has flaws but overcomes them in making you care about the characters. And as action scenes and fight choreography go, these, well they....you know.

High schooler and avid comic reader Dave Lizewski wonders why noone has ever tried to be a real-life superhero before. Surely it can't be all that hard. But he finds out there's more to truth, justice and the American way than the comics let him in on. First there's the very real fact that he doesn't have any superpowers and is liable to get as good or better than he can give. Second there's those pesky mob types that mistake his handiwork for that of the far more agile Big daddy and his daughter the prepubescent Hit Girl, two extremely capable costumed killing machines. And then there's the Crime Lords hopelessly nerdy son who tries his hand at being a vigilante to help foil the heroes and win a place in his dads family business. Will Daves new career fly? Will Big Daddy and Hit Girl fight their way to justice? Or will the real world and the Red Mist flatten them all.

There have been a fair number of films that explore the idea of the ordinary person as superhero .Great ones like Kick Ass! and Special (2006) take the desires of their characters very seriously giving them strong arcs through which viewers can identify without rubber stamping everything they do in costume (or out) as okay. They remain human in their individual struggles to stand out, make a difference and be an instrument of good as well as in their pride and desire for fame. Kick Ass! is a film that is liable to be written about for years and inspire a lot of dialogue about the role we assign to heroes in our culture and the importance of seeing everyday life as a stage for heroics.

Chloe Moretz steals the film as Hit Girl.This kid is up against the dynamic Mark Strong whose recent turn as Lord Blackwood in Sherlock Holmes (2010) has made him the Hollywood go to guy for villainy. Strong takes a role designed for scenery chewing and delivers some real menace. That Moretz can hold her own with him bodes her well. She's also up against Nicolas Cage whose hilarious and touching performance as Big Daddy must surely rank as one his very best. But when Moretz is onscreen there's literally no one else there. She's simply the best thing about this film and any discomfort I initially had about her foul mouth is handily dealt with by a plot that has more in mind than shock. This is the story of a girl forced to grow up too soon who gets a chance to be a kid once again. We believe Moretz in both parts.

The only mildly disappointing thing here is the ending. For a film that spends a lot of time deconstructing vigilantism Kick Ass goes far out of it's way to provide a happy ending for it's good guys. In real life the good guys don't always win especially when they blur the lines between civic duty and revenge. But the film does have a lot to say about the subject and the villains, though clearly the stuff of cardboard cruelty  do press a major moral point; "With no power comes no responsibility." Dave ultimately must decide whether he believes this or not. "Why do we want to be superheroes?", the film seems to ask. Is it because we want babes, action or notoriety. That's what youtube is for. In real life there's work to be done and stands to take whether or not you have the power to change anything at all.