First Images From The Set Of Calvin Lee Reeder's THE OREGONIAN 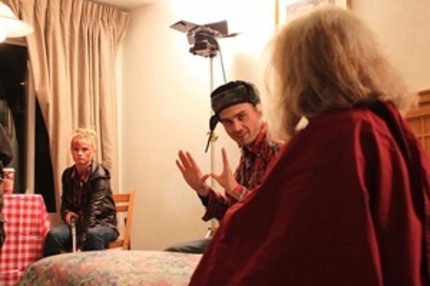 Trying to explain a Calvin Reeder film using plain language is a losing game.  His work is meant to be experienced, meant to unsettle and confuse and amuse and provoke primal reactions in his audience.  He's a sort of rural David Lynch, a back country absurdist smearing subconscious urges on the screen.  And for those reasons I'm not even going to attempt to explain what The Oregonian is beyond saying that it is Reeder's debut feature following the successful festival run of his shorts (Little Farm, The Rambler, Snake Mountain Colada) and that fans can expect more of the same.

We've got the first images from the shooting of the film - some stills, some behind the scenes - in the gallery below and I'm including the trailer for The Rambler to give a taste of Reeder's unique world.
Sign-In to Vote
Tweet Post Submit