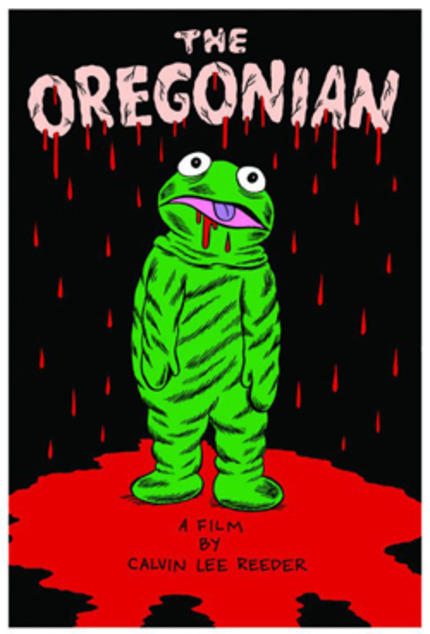 In his feature debut, Calvin Lee Reeder has succeeded in a big way.  While The Oregonian is something that will probably never get a distribution deal and has a limited possibility of home video exposure, I feel confident in saying that the film appears on screen in exactly the way he wanted.  Every moment of The Oregonian is absolutely pulsing with tension, and Reeder's direction only manages to ratchet that tension tighter with every frame.  The Oregonian is a nightmare on film, perhaps more than any film I've ever seen, even more so than David Lynch's oeuvre, Reeder captures the feeling of being stuck in a time and place from which there is no escape.

The story, if you can call it that, focuses on the titular Oregonian, played by Lindsay Pulsipher, and the aftermath of a car crash.  We know she is an Oregonian only by the license plates of her car, no further reference is made, and we never learn her name.  She discovers that she's committed a grave error and she starts off down the road looking for help.  She is covered in blood and injured.  This is all we know.

This can't have been an easy job for Pulsipher.  Her role, while not dialogue heavy (there's hardly any in the film at all), is grueling.  She is made to limp for what seems like miles down empty country back roads while screaming and looking terrified. It may not sound like much, but it takes its toll, both on The Oregonian and the audience.  The film really picks up as she begins to encounter one stranger after another, soliciting help, but receiving only evil grins and worse.

Each new encounter cranks up the crazy a little bit.  The first stranger creeps The Oregonian, and the audience, the FUCK out.  Then, after a few more encounters, you kind of find yourself wishing that the subsequent weirdos were as benign.  There are hippies, weird truck drivers, musicians, and my own personal favorite, a guy (presumably) in a giant green furry costume.  Almost none of these people speak, and when they do, they hardly make any sense.  In fact, nothing in the film really makes any sense, but that is the way it is supposed to be.

Only once does the film digress into something resembling exposition.  This moment occurs for The Oregonian via flashback, but within a few moments, we all realize that even her memories have been corrupted by whatever virus or madness she is experiencing.  It is a neat little trick by Reeder, who lulls the viewer into a brief moment of lucidity, only to pull the rug out and knock us right back on our asses.

The Oregonian is like spending 80 minutes in Twin Peaks' Red Room.  Nightmare logic is a frightening thing, especially when there is no waking up.  Calvin Lee Reeder takes his own sensibilities and creates something that is a mash up of the most disturbing images from Lynch, Cronenberg, Jodorowsky, and Kenneth Anger, with none of the humor, black or otherwise.  I never found the film boring, and I never felt as though it was weird for weirdness sake.  Every frame of the film had a purpose, and that purpose was to unsettle.  Mission accomplished.