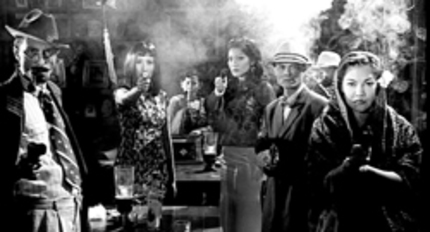 Saleh used to be a reporter. But, his stories were too sensational to put to print so he is a reporter no more. While driving near a rural town he gets a flat tire. Under normal circumstances flat tires happen to even the best of us. Except this is not a normal circumstance. Saleh has run over a skeleton and the dagger clutched in its boney grip was the culprit. Stranded for at least a day until a new tire comes from Singapore, and sensing that he has another sensational story that his boss cannot say no to, Saleh checks into the local town hotel and experiences the local color, in glorious black and white. He soon discovers that the town is gripped in fear of a phantom that comes every full moon and steals away one of the men from the village. The race is on before the next full moon to unravel this mystery and get the girl, if she doesn't get him first.
Writer/director Mamat Khalid creates a loving and ambitious throwback to classic noir, mystery and monster films in When The Full Moon Rises. Interweaving these themes in a sometimes delirious mix of femme fatales, gangsters, a nazi cult topped off with musical numbers there is a little bit of everything for everyone in this film. Then just when you think you've had enough Khalid throws in a bit more. And together with his cinematographer Raja Muhkriz Raja Ahmad and art director Nazrul Asraff, Khalid's film is also gorgeous to look at as the stark contrasts enhance the subject matter. Fans of noir film will be especially pleased with the results on screen. Bang on.

Playing Saleh, Rosyam Nor rolls through the narrative like a reckless Sam Spade or Phillip Marlowe wrapped in the cool swagger of Malaysian film legend P. Ramlee. At least he tries to. Saleh is hardly anything if competent yet despite the many attempts to get him out of town of rub him out he is still defiant to danger and death. Rosyam Nor handles this humorous and whitless role with ease. Opposite Nor, Khalid`s femmes fatales, a bevy of beautiful women, Cik Putih, Miss Rohayah and Corinne Adri, are either out to mislead him, marry him or kill him. The rest of the characters in Khalid`s film are just as eccentric and weird.

As far as his screenplay goes however When The Full Moon Rises may have benefited from a bit of tightening up and when what seems to be the conclusion in the third act is actually only the beginning of it the film begins to lose a bit of steam and waver a bit. It is just a little more than surprising, I don't want to say discouraged, when it seems that the intention of the script was to get us to this point and then only to continue further. Bah. If what followed wasn't simply a wacky and goofy ending to the film I might have been disappointed with the end result.

There is a reason that When The Full Moon Rises took home it`s fair share of awards at the Malaysian Film Festival in 2008: Best Actor, Best Art Direction, Best Costumes, Best Film and Best Director. And despite the anti climactic hiccup at the beginning of the third act it is still very enjoyable.

When the Full Moon Rises

Do you feel this content is inappropriate or infringes upon your rights? Click here to report it, or see our DMCA policy.
Mamat KhalidRosyam NorUmie AidaAvaa VanjaCorinne AdrienneComedy

More about When the Full Moon Rises