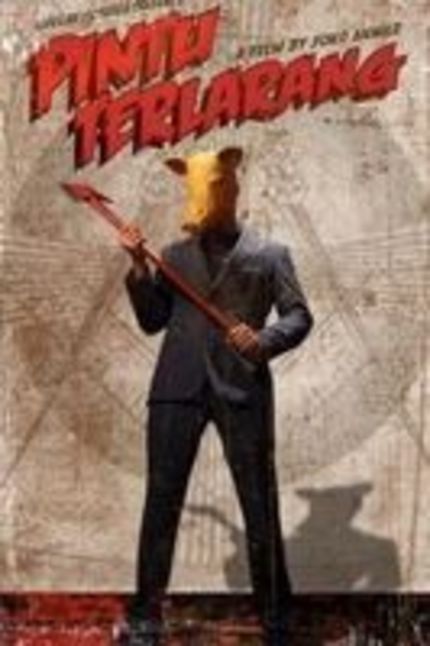 A batch of screeners from Grady Hendrix is a happy mailbox day!!! Especially when those screeners are for nearly the entirety of the 2009 New York Asian Film Festival. The Forbidden Door was first. What’s up with the pig head and the axe? Must be a horror film. Hopefully not a Saw rip-off. No worries. This blood-soaked unpacking of what it means to sell-out should haunt anyone who has ever called themselves artist and asked to be paid for it.

This could be remade for an American audience but no doubt it would flop. First some idiot would try to squeeze down the extreme elements that make it work to get a PG-13 rating. But even if it arrived intact the impact would be lost on those who see no difference between ballet and the gyrations of Brittany Spears. Not for the weak of heart or stomach and definitely not for those who already struggle with paranoia about what may be going on behind their back The Forbidden Door was a fabulous film to open up my experience of this years NYAFF event.

Gambir is an artist but he’s not starving. But his nice house is courtesy of his father-in-law, his pretty wife wants only for him to get ahead, and his connected mother desperately wants a grandchild. That is only the beginning of his troubles. Directionless he caves in to everyone around him and his growing desperation is fed even more by the discovery of a special club with a closed circuit TV system offering inspiration at a price. Soon he finds himself embroiled in a world where all the ties that bind are also the ties that choke off life and breed paranoia. And the method by which he frees himself is a doorway into even darker bondage.

It’s tempting to dismiss the metaphors here as heavy-handed but the crowd I travel with can often use a good loud shout when it comes to paying attention to subtext. Look for dead babies, forbidden doors, rooms and relationships and heaping helping of madness when you are trying to unpack what director Joko Anwar (Kala) is saying about greed, art, and the ties that bind us all. Incorporating elements of the Hostel series, film noir and psychological horror this begs to be seen on the big screen where the arterial spray can underline the Shakespearean sensibilities. Part tragedy, part drama, and hard to watch this is dangerous filmmaking made all the more dangerous by the line it walks between exploitation and truth telling.