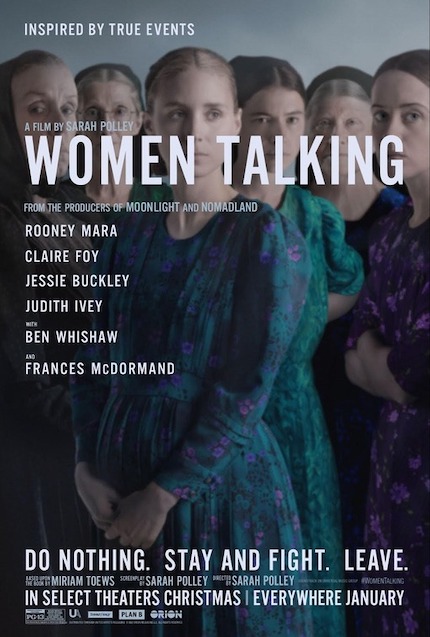 Already an accomplished filmmaker, actress-turned-director Sarah Polley raises her voice to the next level for her latest, Women Talking.

Based on the 2018 novel of the same title by Miriam Toews, Women Talking stands tall as a bold, deep dive into the raw emotional grappling inside a communal fight or flight decision.

While it’s true that the film lives up to its title for most of its running time, it’s never less than a visual feast.  Polley and cinematographer Luc Montpellier bring an effortless facade to their rendering of this group of less than a dozen (give or take at any given time) victims of rape and sexual assault gathered in a barn, simply verbally hashing out what on Earth to do.

The women doing this talking are portrayed by a most formidable ensemble, each doing top-tier work amid this wrenchingly difficult subject.  They include Rooney Mara as the young Ona, Claire Foy as Salome, Jesse Buckley as the ever-seething Mariche, and one of the film’s producers, Frances McDormand, in the smaller role of the unapproving mother, Scarface Janz.

Serving as their scribe is the only university-educated one among them, and the only male, August Epp, achingly portrayed by Ben Whishaw.  Polley’s robust narrative simmer is perfectly balanced with the urgent semi-minimalist tones of composer Hildur Guðnadóttir, as well as a well-placed pop hit.

At the very start of this rural tale, an onscreen graphic tells us that the film we’re about the see is a work of "wild female imagination."  This is an immediate owning of a phrase regularly employed against female accusers by the male abusers of the extremely patriarchal community in question, as well as those in power who shield and protect them.

It is a secluded Mennonite community, settled into all the old-world accoutrements: handmade, plain clothing, horses and buggies as the only mode of transportation, farming of course, and headcovers on all the women, all the time.  It may or may not come as a surprise (though it’s no internal secret) that the film takes place in contemporary times (2010).

Before our eyes, an insular, extreme edition of woman’s rights in the 20th century and onward plays out.  The women congregate in secret.  The truth of their shared plight has been acknowledged.  A debate is had over how to deal with it.  They can either stay and live with it, rebel, or leave.  A secret vote is taken.  A collective decision is reached.  The rest of the film is merely the necessary myriad of what ifs, what abouts, and wherefores.  We hang on every word of Polley’s screenplay.

Their faith, though, is never not taken seriously on any level; many of their debates are theological in nature.  In a movie year that seems to have God on the mind (see: Darren Aronofsky’s The Whale or Antoine Fuqua’s Emancipation), this handling is the most revelatory.

If 2022 is going to grant only one “Film For The Ages," it must be Women Talking.  One can foresee it alongside the hallowed Greats of the form.  Strident and rightly defiant in the face of a long-festering evil authoritarian structure, Polley’s lobs and volleys are nothing if not impressively calculated.  So radically uninterested in hearing the male side of the story, she doesn’t even bother to give them screen time, much less a voice.  (It is, after all, a voice well documented heretofore).  In the rare event that one of the men in question appears, he’s tiny in the frame, probably facing away.

The exception, of course, is Whishaw’s “holdout," August.  It doesn’t feel quite right in singling out his performance over the many A-game female performances, though it must be said that what begins as oddly off-putting comes around to something powerfully resonant.  But then, that’s true of the whole thing, a five-out-of-five-star accomplishment from beginning to end.

Sarah Polley truly solidifies herself as a formidable director with this show of “tell, don’t show” hashing-out.  Although this is a quiet movie, it is a pronounced one, making its thorough stand soundly.  And that sound is the sound of Women Talking.  Indeed, we should all be listening.

Review originally published in December 2022. The film expands wide in the U.S. on Friday, January 6, 2023, only in movie theaters, via United Artists Releasing. Visit the official site for more information.