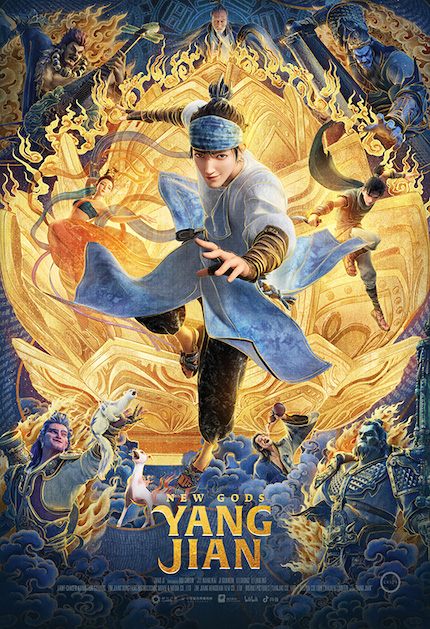 Watching the movie is like reading a gorgeously-illustrated textbook.

New Gods: Yang Jian
The film opens January 20 in select theaters via GKIDS Films. Visit the official site to see where it is playing and read more information.

Some things do not translate easily from one culture to another. Case in point: mythology.

The second in a planned series of films whose stated goal is to reimagine classic Chinese mythology, New Gods: Yang Jian eases gently into its story. Erlang (Wang Kai) leads a rogue group of bounty hunters who travel by a boat that flies through the heavens, powered by cosmic gas (?!).

Their latest bounty introduces Erlang as a sleepy sort with magical powers that he unleashes only when necessary, as he easily defeats armed foes and captures the bounty in a sequence that is enticingly filled with action of various kinds. After the successful completion of that job, their next task is what kick-starts the entire movie, as Wanluo (Ji Guanlin), a mysterious dancer, hires the crew to find Chengxiang (Li Lanling), who has stolen a powerful object.

As it turns out, Chengxiang is someone important to Erlang, and the mission reveals Erlang's true identity: Yang Jian. During a catastrophic war between immortal heavenly forces and mortals some years before, Yang Jian lost his god-like powers in a battle against his own sister, which ended with her entrapped beneath a mountain, and Yang Jian wandering the heavenly realms as a bounty hunter.

The questions are answered, meticulously. For those of us who are not well-versed in Chinese mythology, though, it probably helps to take notes. The highly-detailed and richly-colored backgrounds certainly enchant, with their abundance of eye candy and varied landscapes.

I saw and throughly enjoyed White Snake, also produced by Light Chaser Animation, which marked director Zhao Ji's feature debut, as co-director with Amp Wong. That film "looks and plays as a very serious, sumptuous, and rather splendid animated adventure that dances nimbly between myth and legend." Zhao Ji subsequently directed New Gods: Nezha Reborn, the first film in the series, which I have not yet seen.

To be frank, jumping on board the second film in the series is likely what tempered my response. As with White Snake, the animation is a wonder to behold, yet I was frequently at a loss to follow the story; I also had trouble keeping track of the characters as to their true motivations.

These personal travails may sound like catnip to readers who are eager to see what Chinese animation has to offer on the world stage, and can relate more easily to the culture and myths that are explored and depicted. And the film looks gorgeous; who doesn't enjoy plenty of eye candy?