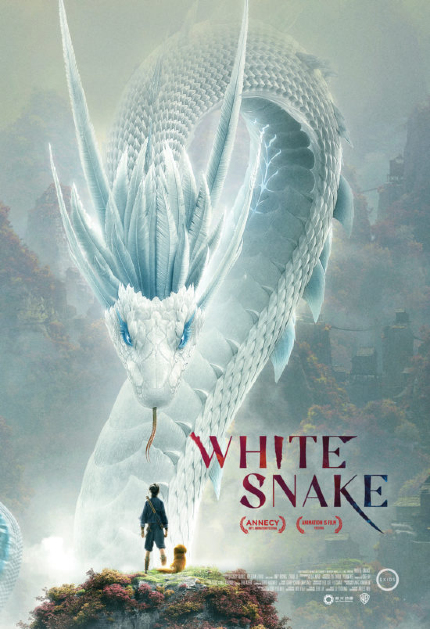 "Of all the gin joints, in all the towns, in all the world, she walks into mine." -- Rick Blaine, Casablanca.

"Snakes. Why'd it have to be snakes?" -- Indiana Jones, Raiders of the Lost Ark.

White Snake
The film opens at the Nuart Theatre in Los Angeles on Friday, November 15, via GKIDS Films. It will expand to select theaters across the U.S. on November 29.

My initial impressions of Chinese-language animated films were formed by the very cute and funny My Life as McDull (2001), followed by the clever Master Q: Incredible Pet Detective (2003), both springing forth from Hong Kong, and memorable more for reflecting the spirit I'd come to associate with Hong Kong films of that era: feisty, spunky, funky and entirely fun for a naive North American to experience.

That said, it was a shock to realize very, very quickly that my expectations about a new animated film from Mainland China were entirely wrong. White Snake looks and plays as a very serious, sumptuous, and rather splendid animated adventure that dances nimbly between myth and legend.

Tsui Hark's Green Snake (1993) drew upon the same source material, the Chinese legend Legend of the White Snake, fashioning a spectacular action-fantasy film that remains riveted to my brain, though, frankly, the details have fled away from my single viewing. Starting fresh, the animated film begins with two women who are very close to each other, Blanca (voiced by Stephanie Sheh) and Verta (voiced by Vivian Lu).

Where they are located, and what, exactly, they are doing is not immediately apparent. Blanca says she has been meditating for 500 years, seeking yet not achieving immortality. Verta is supportive, and even gives her a treasured hairpin.

The prologue concluded, an opening title card informs us that, in a distant past, the Emperor seeks immortality; to help him achieve his goal, his General demands that the people capture snakes, which will help the Emperor. And, yes, I was already lost with the story, which is tied up with legends that are no doubt very familiar to millions and millions of people.

Even so, Blanca captivated me. And likewise the characters who surround her. And the graceful artistry of the background designs and layouts. I felt transported to the late 1990s and early 00s, when I watched any and every Hong Kong film I could lay my hands and eyes upon, whether on DVD or VCD, and occasionally videotapes.

In White Snake, the animation is beautiful and world-class. It is, perhaps, a step below the very best of the top-flight animated features that have increasingly won distribution throughout the U.S. -- the production budget is obviously much bigger than in days past, but it's still not at the Pixar level of lavish quality -- so it's reliant on the characters and the story carrying the dramatic weight, rather than the "wow" or "cuteness" factors that have become poor substitute in too many major Hollywood animated productions (not Pixar, to be clear, but others from big studios that should know better).

Getting back to Blanca, she is a wonderful construct, though still hidebound to an extent upon masculine prerogatives. (She needs 'savior' help, natch.) For the most part, she is showcased as a powerful figure, as is Verta. The male characters are shown to be less capable and, in general, much more despicable and disposable, save for Ah Xuan, the solitary male figure of valor and romantic object of interest for Blanca.

I'm dancing around possible spoilers, because that's how I experienced the film, though that's probably entirely unnecessary for the intended audience, i.e. people who know the legends and myths, and can comment intelligently upon the film's divergence from or adherence to what is expected.

Summing up: My expectations were far exceeded by a genuinely moving and eventful adventure.