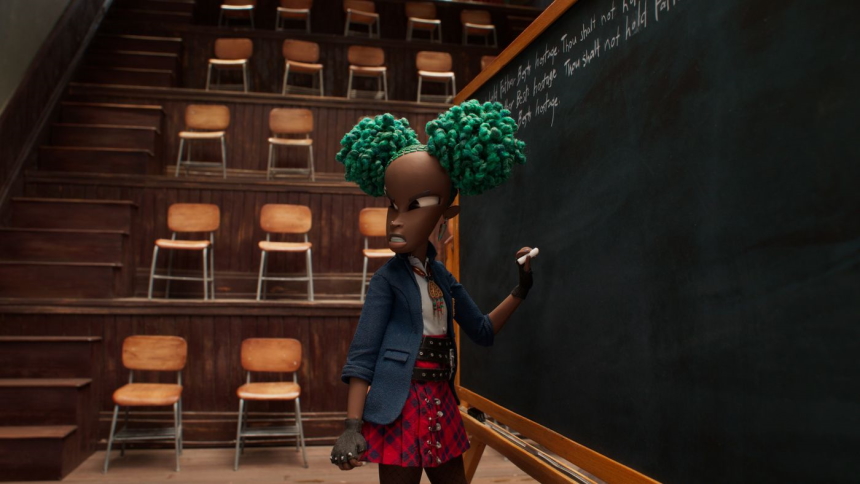 “One scream, and my parents were gone.” After an abrupt car crash (aren’t they all?) a very young girl, Kat, loses her loving, independent and artistic parents. She ends up in “the system,” a series of orphanages and youth detention centres, which mature her into a badass goth teenager. Obviously, she has personal demons. Because this is a Henry Selick film, those demons are quite literal. In fact, they are a stop-motion embodiment of Keegan-Michael Key and Jordan Peele.

God, it is good to have the director of Coraline and The Nightmare Before Christmas back. With a big budget and an original story to boot.

Wendell & Wild is bursting at the seams with black-light visuals and monster-sized ideas. So much is going on here that the narrative struggles at time to contain and balance everything. Be prepared to hold-fast, as this film has a story to barrel through, and it is not going to slow down or linger on many of its wonderful sights. It will take multiple viewings to look into all the nooks and crannies of its blight-stricken American town, and the theme-park underworld that lives on the belly of Big Daddy Belzer. The Specials’ “Ghost Town” plays on repeat.

Wendell and Wild (Key & Peele) are the impish tiny children of Big Daddy, who have their own designs on a “Bemusement Park” of their own, but are relegated to repairing the ailing follicles on Big Daddy’s head with a magic hair cream. Yes, they live like ticks on their father’s scalp.

When they stumble upon Kat’s situation, her trauma lets her commune with hell, they hatch a plan to use her as a vehicle to push forth into the land of the living, and open their dream fair. Meanwhile, Kat has been shunted off to a new private school, care of a government pilot program to mix problem children with privileged ones, administered by the Catholic Church.

What could possibly go wrong?

The school is located in her now decaying home town, which a far cry from the vibrant middle-class community when her parents lived there. Blight-stricken and nearly abandoned, it is on the verge of being bulldozed by wealthy, blue-blood, Cruella De Vil type developers to make way for a private mega-prison.

The plot is a heady cocktail of grounded social issues, the vulture-capitalism cycle of poverty to for-profit prisons, real-estate redlining, and demolition of ethnic neighborhoods to make way for big government infrastructure. There is community activism, and even a subplot about election fraud. It is vigorously mixed with the dark-carnival Oogie Boogie spectacle and showmanship familiar to fans of the director. It will give you cognitive-whiplash as it snaps between Kat’s journey through her own trauma, Wendell and Wild’s shuckin’ & jivin’, and the wonkish autopsy (or is it vivisection?) of the failure of American institutional welfare systems for those struggling to grab their own sliver of the American Dream.

For Halloween kids entertainment, this is bold stuff indeed.

A cornucopia of supporting characters do their level best to keep the film from flying off the rails or prevent the subtext from suffocating the text. Beyond the punkish Kat on her “hell-maiden” hero-journey, and the eponymous demon duo slap-sticking the joint up, there is James Hong, who reprises his Lo Pan character from Big Trouble in Little China, in the guise of an Irish Catholic priest. Angela Basset voices a fiery warrior-nun, that for whatever reason, reminded me of Michael Ironside's turn in Starship Troopers. Ving Rhames offers dulcet line delivery as Big Daddy, while his epic sunglasses do much of the work.

One of Kat’s newfound friends in the orphanage, Raul, is an aspiring artist in the vein of the big installations of Ai Wei Wei. He acts as a helpful levelling agent for all the shenanigans at play. In the film's lone quiet moment, we watch Raul’s mom (who is also an activist-lawyer, and agent of the straining plot) make pasta sauce. Dollops of red juice splatter and fleck along the sides of the countertop; slowly dribbling down the side of the drawers. It evoked a more measured family domesticity, one typically encountered in the works of Studio Ghibli. If only for a moment.

Wendell & Wild has a kind of cinema pastiche that far goes beyond the obvious surface level of: The Addams Family meets Foxy Brown.  There is the caretaker of the orphanage, Manberg, who is legless in a wheel chair. He looks and talks like an aging Marlon Brando. Not Island of Dr. Moreau fiasco Brando, nor Colonel Kurtz snail-on-the-edge-of-a-razor Brando, or any character that Brando played, but rather a heightened caricature of real life batshit crazy Brando. Only here he is an accidental villain, and unwitting hero.

It works if you can keep pace with its manic energy.

Wendell & Wild is a primal scream, and then it is gone.

More about Wendell And Wild