Director Alice Diop is making a powerful statement, about the highly patriarchal society, colonialism, racism, and women's rights, both subtly and unsubtly. 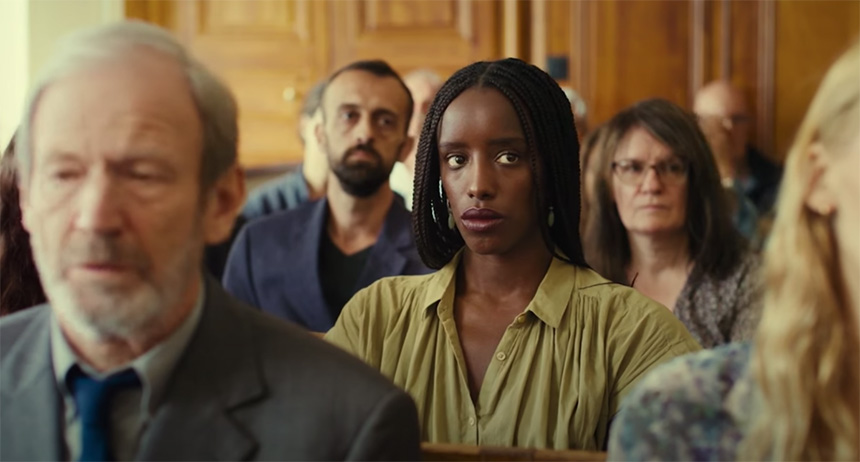 Fascism and the hard-right are on the rise all over Europe. In the US, southern States are rounding up immigrants at the border, and putting them on planes bound for the more liberal north for political stunts. Iranian women are protesting in the streets against hijab laws.

Mainly concentrating on the African immigrant communities in the suburbs of Paris where she grew up, as shown repeatedly in her documentaries, Diop sets this courtroom drama in the Saint-Omer region of Northern France this time. It concerns an insanity defense of a young Senegalese immigrant, who drowned her baby in the sea. Going through the questioning of both a defense lawyer and a prosecutor, and their testimonies, we see how society at large and the legal system puts countless migrant women in a precarious position, demonstrating its effects in sobering ways.

Rama (Kayije Kagame), is a successful author and lecturer. She is seen at the lectern in a hall, showing footage of women with shaved heads in a Nazi concentration camp. Her lecture is on Marguerite Duras and her theme of humiliation and the permanent scars it leaves on women.

Rama is a sullen and serious woman who has a complex relationship with her Senegalese mother and her large family. Nothing is said outright, but it's her mother's gesture or silence that tells her that however successful she is, she would never satisfy her parent. This is something as an immigrant, I can totally relate to.

For her new book, Rama is following the sensational trial of Laurence Coly (Guslagie Malanga), a young Senegalese immigrant who is accused of the infanticide of her 15-month old daughter. She is termed as 'Medea' of Saint-Omer, a character in a Greek tragedy, who killed her own children in a vengeful act against her unfaithful husband.

In court, everyone comments that Coly speaks in highly educated French. She is well spoken, calm and doesn't seem to be under the spell or curse as she claimed to have been at the time where she knowingly abandoned her baby on the beach at high tide. It seems out of character, since she is a Western-educated woman. The prosecution is making the case that she is a manipulative woman who killed her baby because the baby got in the way of her career.

Yet Coly's journey has been a sad one: just like most parents who send their children abroad, her Senegalese parents' priority was on education. Coly was supposed to study law in France. The pressure of being successful in her parents' eyes was enormous while working as an au pair in a foreign country.

Through relatives she met a much older white man, who promised her financial security. But when she found out she was pregnant, she fell into a deep depression. She abandoned her studies, hid from the world and didn't leave her apartment for months.

Rama, attending the Coly trial everyday for her book research, slowly finds a parallel storyline emerging with her own life. Meeting Coly's mother doesn't help the matter. Mrs. Coly is there to support her daughter. She immediately recognizes Rama as a fellow Senegalese and chats up in Wolof.

Her judgmental stares are too much for Rama's guilty conscience. But guilty of what? Why do her stares make her extremely uncomfortable? Even though her white, good natured husband's consoling that she is not her mother's daughter, what she sees in Colys is too much to bear.

Saint Omer directly addresses the pressures and impossible situations many immigrants, and especially migrant women, find themselves in, in a foreign country where there's nowhere else to turn to. And the mind plays tricks on you when you are desperate. Irrational becomes rational. For Coly, a bright young woman whose pride is crushed by circumstances and worse, humiliated by her predicaments, she went into a postpartum depression.

The film doesn't end with the verdict of the trial, but rather, ends with defense lawyer talking directly to the camera/audience and explaining the clinical term, a microchimera, an interchange of cells between a fetus and its mother that goes both ways. That, in metaphorical sense, all women are chimeras, the mythic monster composed of different parts of the beast.

Diop here is making a powerful statement, about the highly patriarchal society, colonialism, racism and women's rights, both subtly and unsubtly. Saint Omer is undoubtedly one of the best films of the year.

Dustin Chang is a freelance writer. His musings and opnions on everything cinema and beyond can be found at www.dustinchang.com