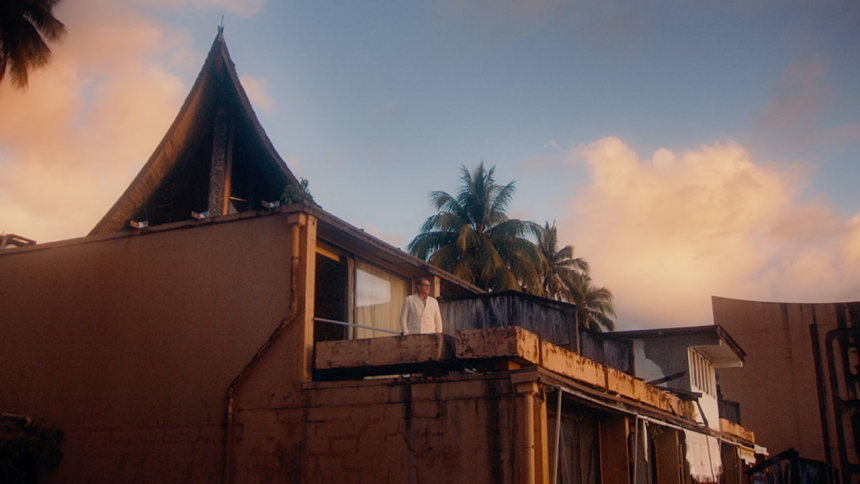 “This is my office, and it is always trying to kill me,” pontificates the High Commissioner, a man named De Roller, as he grandstands, slinks, and politics though his duties in Albert Serra’s paranoid, sun dappled enigma. If only our ‘fake news’ and conspiracy culture could be as artful and sublime as his latest film, Pacifiction.

French star Benoît Magimel looks and acts the part of the appointed colonial head of state of French Polynesia, in his crisp while linen suits and top-button undone button-downs. He can hold court to local business interests in the formal resort meeting rooms, the offer support and criticism in the rehearsal spaces of a traditional aboriginal dance show, or move through the purple neon shadows at the sleazy nightclub, Paradise Night, where the ‘real’ action happens.

By action, it is not that exactly, more insinuation. Mysteries that we never get answers to, deals that never quite come to fruition. Clocking in at nearly 3 hours, the film feels longer, more languid, more episodic (and certainly odder) than the paranoid 1970s political thrillers from which it seems to draw inspiration. When this kind of quintessential Hollywood prestige genre plot (think The Parallax View or The Conversation) is filtered through a European Arthouse sensibility, it takes on its own kind of inscrutable originality, and results in underrated gems like Olivier Assayas’ Boarding Gate, or Corneliu Porumboiu’s The Whistlers. This is a profoundly underserviced sweet spot in cinema (for me personally). Pacifiction wonderfully scratches that itch.

The impossible pinks and deep oranges of Tahitian magic hour set the tone, or at least the post-card veneer, as we get a heightened tour through the more banal aspects of 21st colonialism and foreign administration. We only see events through De Roller, who, despite his charisma and integration with the locals, is oddly, ‘the little guy,’ and his job feels almost irrelevant, perfunctorily. He has no idea what is afoot, politically but he has suspicions, and in an act of self-preservation, or self-immolation, attempts to get to the bottom of some sort of Military conspiracy involving nuclear testing, and is convinced that there is a French submarine docked off the island, which is being serviced by midnight trips from the local prostitutes and their enablers.

Various shady operators are operating on the islands, a thin high-cheek boned American spook, a drunk Portuguese diplomat who has lost his passport and his entourage, a French Naval officer with a penchant for the nude male dancers at the club, and an ambitious resort staffer, round out a cast of unusual suspects, including Spanish star Sergi López who plays the Paradise Night proprietor, Morton. He lurks in the background, observing everything and doing nothing, with an air of casual, ambiguous, cruelty.

The film pauses, at the midpoint, to observe a collection of boats take in surfing event. The spectators, including De Roller, are nearly swept away several times, bobbing almost helplessly on the unpredictable swells. Danger and entertainment with a gorgeous backdrop. This one of several unsubtle, but terrifically spot on, metaphors (see also a spectacular bit of cock-fighting theatre) that Serra swirls around like aged wine, before spitting it out and moving on. You do this particular "narrative tasting" on the filmmaker’s terms, or you exit the cinema.

Pacifiction is that kind of movie, it is certainly not for all tastes. A feeling of partying all night with the devil under swaying palm trees. At a certain point, cut off from all reality, one can never quite seem to escape its lurid tropical gravity. In a word, it is hypnotic.