Zac Efron stars in a Vietnam War comedy from director Peter Farrelly that strains to be taken seriously, streaming on Apple TV+. 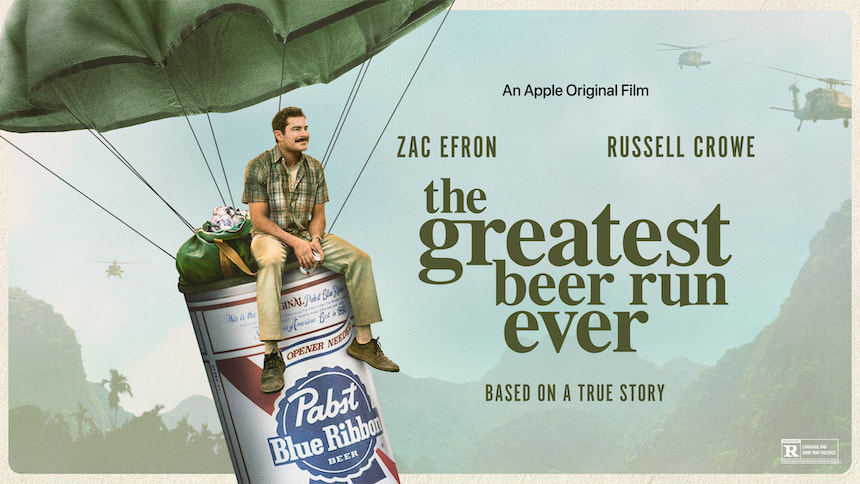 Wait, war may not be good? Who knew? And why didn't anyone tell me?

The Greatest Beer Run Ever
The film will start streaming Friday, September 30 on Apple TV+ .

Inspired by an allegedly true story, Zac Efron stars as Chickie Donahue, lightly regarded in his native New York neighborhood as a friendly and likable guy whom no one takes seriously. One drunken night in 1968, he seizes upon an idea offered by his bartender (Bill Murray), a World War II veteran, namely, to deliver beer to his neighborhood buddies serving in Vietnam.

Since Chickie is a Merchant Marine, he is able to catch a ride on a vessel heading out to Vietnam the next day. Neighborhood skeptics and war protestors put him in the mood to prove himself, and so he ships out on a two-month voyage. As depicted in the film, he doesn't spend a minute of those two months making any plans for his foolhardy mission, instead trusting his own foolhardy nature to somehow help him accomplish something that sounds trivial even before it begins.

From the depiction of Chickie's family and bar buddies through the first 80 minutes or so, the film is loose-hinged, high-spirited and passably entertaining as a comedy that never veers close to authenticity or believability. Instead, it feels like an overproduced goof with quite decent production values that would have better served the material as a 13-minute short film, which, in fact, it was, released by a beer company in 2015. (See embedded video below.)

From that narrative point onward, Farrelly and his team endeavor to provide ballast for the comedy with an extended dramatic sequence showcasing the horrors of war as it came home in Saigon one night. Russell Crowe carries the heavy baggage as a photographer/war correspondent who helps Chickie survive the night, while also reminding him constantly: 'This is the reality of war.'

Blowing the film up to feature-length also highlights Efron's limitations as a dramatic actor. As long as the story stays on the lighter side, he's perfectly fine, a good-looking dude who makes his civilian clothing look intentionally stylish. As the material strains for seriousness, though, Efront is left adrift by director Farrelly, and the movie flounders.

The short film renders a succinct account of what happened, and Chickie himself recounted his experiences in a book, written with Joanna Malloy. It's a good bar story, the kind of thing that friends might relate while relaxing with an adult beverage, but as a film, it's messy and preachy, concluding on a point that every thinking adult reached, probably before reaching drinking age: "War. What is it good for? Absolutely nothing."

The Greatest Beer Run Ever