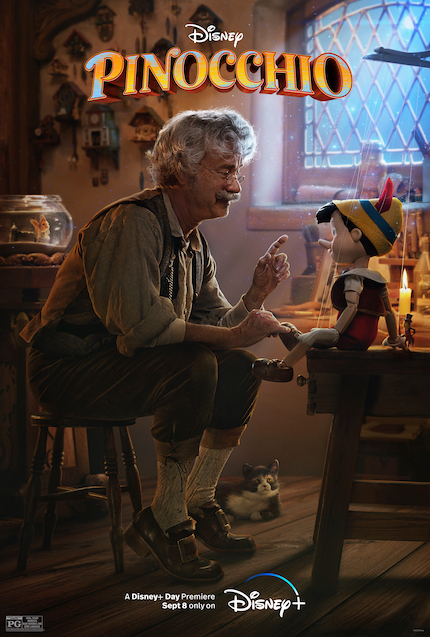 Right out of the gate, I was charmed. But then, I'm a real boy, so what do I know?

Pinocchio
The film is now streaming worldwide on Disney Plus.

Disney live action-remakes of their animated library gained speed after Tim Burton's Alice in Wonderland (2010). Since then, we've seen a steady string of such films, including Cinderella (2015), scripted by Chris Weitz, who is credited for the screenplay here along with director Zemeckis.

The live-action remakes have ranged from daring and good (Maleficent, 2014; Cruella, 2021) to long and not terribly memorable (everything else). Pinocchio is not daring in its execution of the material, which originated in a children's novel by Carlo Collodi, first published in 1883, and sticks to Disney's moralistic, family friendly approach. Yet it feels light and airy, landing its lessons gently, and features a marvelous teaming of live-action and CGI.

Zemeckis, of course, directed the boundary-busting Who Framed Roger Rabbit (1988), which boldly combined live-action with animation (and featured Pinocchio in a cameo near the end). Since then, he's never shied away from projects that call for visual effects that are sometimes groundbreaking, sometimes budget-busting, and sometimes simply astounding.

In this Pinocchio, all the familiar characters appear, along with several new characters and a recognition that we all exist in a much more diverse world than we did as the Second World War broke out. Zemeckis and Weitz add a few scenes and characters and delete others, with the emphasis on what works best for the narrative.

I haven't seen the 1940 version in many years. Watching the 2022 version made the story feel new, while rekindling memories from watching the older film, prompting me to watch it again (on Disney Plus.)

First of all, I still adore the gorgeously-detailed animation; I remain a 2-D fan. Beyond that, I was struck by how much the new film takes from the Disney version, including tiny bits of comic riffs, while endeavoring to freshen it up and add touches of (literal) color, as well as a bit of a modern sensibility.

Longtime Zemeckis collaborator Tom Hanks makes for a superior Gepetto, with just a hint of sorrow and loss, buried under his grandfatherly appearance. As Jiminy Cricket, Joseph Gordon-Levitt does wonders with his voice, to the extent that I didn't realize it was his voice. Benjamin Evan Ainsworth does fine as Pinocchio.

It may not have surprised me, story-wise, but Pinocchio made me glad that I'm flesh and blood.

Do you feel this content is inappropriate or infringes upon your rights? Click here to report it, or see our DMCA policy.
Chris WeitzDisney PlusJoseph Gordon-LevittRobert ZemeckisTom HanksUS