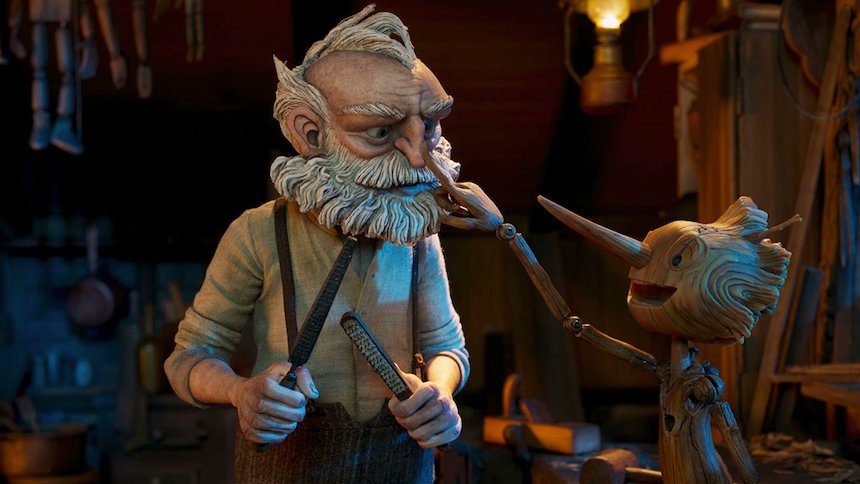 There’s a moment in the stunningly realized Guillermo del Toro’s Pinocchio where the familiar title character (winningly voiced by Gregory Mann), newly granted a semblance of animated life by a compassionate supernatural spirit, attempts to greet his new “father,” Geppetto (David Bradley), for the first time.

"Born" with the ability to think, speak, and move, a clumsy, curious, impulse control-challenged Pinocchio emerges from the shadows crawling on all fours, a spider-like creature who sends Geppetto into paroxysms of fear (also, running away in terror). It’s a sign – though not the first nor certainly the last – that del Toro’s (Nightmare Alley, The Shape of Water, Cronos) stop-motion adaptation of Carlo Collodi’s 1883 children’s classic will veer into the dark fantasy and Gothic horror central to del Toro’s visual, narrative, and thematic preoccupations as a filmmaker.

That introductory meeting between Pinocchio and Geppetto also stands in marked contrast to both Walt Disney’s original adaptation made almost 80 years ago and the positively abysmal live-action/CGI hybrid directed by onetime great Robert Zemeckis more recently. While Zemeckis’s adaptation was nothing more – and often, far less – than the result of a corporate cash grab meant primarily as brand and copyright extension, del Toro’s iteration, co-directed with Mark Gustafson (Fantastic Mr. Fox) and funded by Netflix’s considerable coffers, is nothing less than the work of an auteur working with the best available talent to turn his decades-long dream of making a stop-motion adaptation of Pinocchio.

Set initially in 1916 Italy during the First World War, Guillermo del Toro’s Pinocchio opens with an extended prologue that introduces Geppetto at a much happier time, widowed, but living contentedly as a father of Carlo, an angelic, perpetually angelic preteen. Geppetto also takes immense pride in his work as a woodcarver, diligently attempting to complete an enormous crucifix of Jesus Christ for the local Roman Catholic Church.

When, however, an errant bomb falls on the church, Geppetto finds himself no longer a father, his faith shaken, and all hopes for a meaningful life gone. Del Toro lingers repeatedly on Geppetto’s anguish, not out of a desire to exploit a lonely character’s despair for audience engagement or interest, but as an act of genuine empathy for Geppetto’s unimaginable loss, making Geppetto’s seemingly foolish prayer for his god to bring his newly carved “son” to life even more reasonable.

Lost in a tangled thicket of his own grief, it's not the absent Roman Catholic god (a commentary in and of itself on Western organized religion), however, who answers Geppetto’s tear-stained prayers more than a decade after Carlo’s death, but a pre-modern wood sprite who, like the audience, responds to Geppetto’s loss with sympathy. In one wave of her magically powered hand, the wooden puppet receives a “divine spark,” becoming alive as a result and moments later, attempting to connect with his “father” for the first time.

As already mentioned, it goes badly, though Geppetto’s loneliness eventually gets the better of him and he begins to accept Pinocchio less as his son than as a replacement for Carlo. So too does the film's narrator, Sebastien J. Cricket (Ewan MacGregor), who becomes Pinocchio's part-time companion and full-time conscience through the machinations of the wood sprite who brings Pinocchio to wooden life.

Not surprisingly, it goes badly for the ersatz father and son duo. Pinocchio is anything but dutiful or obedient. Imbued by his maker with an overriding curiosity about the world and a mischievous streak, he’s practically the mirror image of Carlo. That, in turn, sets up the central conflict between an “imperfect son” and an “imperfect father,” each one expecting or wanting what the other can’t or won’t reciprocate.

For Pinocchio, that means crossing paths and falling under the sway of two false father figures, Count Volpe (Christoph Waltz), a down-and-out aristocrat turned carnival impresario who attempts to exploit Pinocchio’s singular existence for personal gain, and Podesta (Ron Perlman), a local fascist who sees Pinocchio, somewhat absurdly it should be noted, as the perfect soldier for Mussolini’s Italy (i.e., all but immortal).

Setting Guillermo del Toro's Pinocchio in Fascist Italy during Benito Mussolini’s reign directly connects del Toro's adaptation to his other anti-fascist parables, The Devil’s Backbone and Pan’s Labyrinth. Set during or immediately after the Spanish Civil War, both films depicted not only the typical horrors of war, but the specific horrors of that particular war that resulted in the triumph of Fascism and Franco’s 40-year dictatorial rule.

The Devil’s Backbone and Pan’s Labyrinth doubled as both exquisitely made supernatural narratives and cautionary tales about Fascism and its brutal, brutalizing power, a revelation Pinocchio learns first-hand through Count Volpe (exploitation with a human face) and Podesta (authoritarianism in an army uniform).

Guillermo del Toro’s Pinocchio is now playing in Toronto, New York and Los Angeles, and will expand to movie theaters throughout Canada on Friday, November 18. It will begin streaming globally on Netflix December 9. (Editor's note: see it in a theater if you can; it looks awesome!)