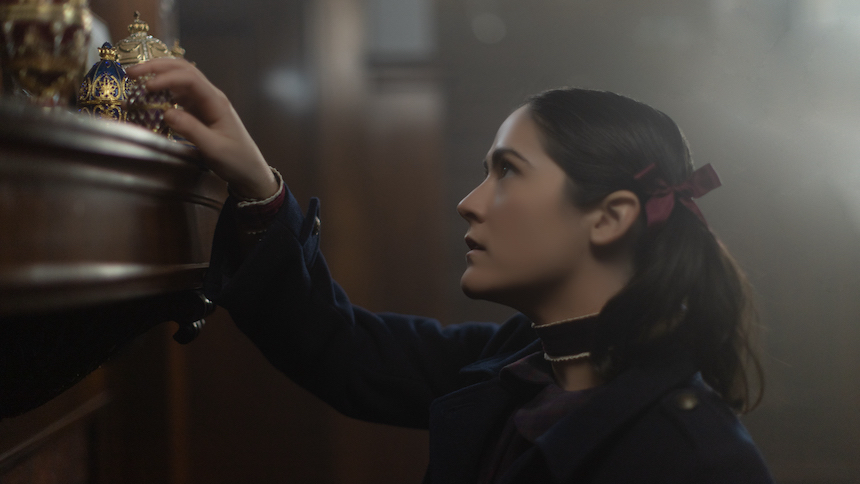 Thirteen years ago, a mid-budget horror film caused an outsized stir among genre film fans stemming from its delightfully absurd third act twist. That film was Jaume Collet-Serra’s Orphan, a film that starts out as an updated riff on The Bad Seed/killer child trope and ended up as a film about Esther (Isabelle Fuhrman), supposedly a nine-year-old adoptee, but whose secret history is so insane that it’s hard not to love the balls it took to put it on screen. The climax of that film seemed pretty final, but no one ever really dies in the film world, so leave it to screenwriter David Coggeshall and director William Brent Bell (The Boy) to resurrect Esther in the new prequel, Orphan: First Kill; and if you thought the first one was wild, it’s time to buckle up.

Orphan: First Kill takes us back in time to two years before the events of the first film, with Leena – Fuhrman playing the same character before having adopted Esther as her identity – residing in a Scandinavian asylum for the criminally insane. Leena is a problem inmate with a trail of bodies behind her that is enough to put everyone working in the facility on edge. More than just dangerous, she is cunning enough to plot and execute a daring, bloody escape, setting a course for a local Orphanage where she’s adopted by a wealthy western family and renamed Esther.

At the head of the household is Tricia Albright (Julia Stiles), who rules over the house she shares with her husband Allen (Rossif Sutherland) and son Gunnar (Matthew Finlan). Esther/Leena is welcomed into the family with open arms, the Albrights having no idea of her violent past. However, as Esther’s behavior begins to become more erratic, Tricia and the Albrights respond in kind, and it becomes clear that Esther isn’t the only one with a secret past. Mother Albright is also hiding something, and she’ll go to any lengths to keep her family safe.

William Brent Bell is no stranger to wild swings in the genre world, his 2016 horror The Boy was a wonderfully chaotic gem that spawned a sequel. With Orphan: First Kill, he has clearly identified the level of coincidental camp inherent in the conceit that made the original film an underground hit and decided to lean into it to create an offbeat film that is always one step ahead of the audience. Orphan: First Kill is just as crazy, just as violent, and just as twisty as the first film and that’s exactly what this prequel needed.

Even the very basic idea that Isabelle Fuhrman – who was ten years old when she shot Orphan – would reprise her role for this prequel is an incredible act of faith. Think about it, ten-year-old Fuhrman played a nine-year-old (*) Esther in 2009, and this prequel uses a twenty-five-year-old Fuhrman to play a seven-year-old (*) Esther. It’s either genius or complete madness, or maybe both? Esther is played by Fuhrman in all close ups, but any time she’s shown with her back to the camera she’s portrayed by child actor as a body double. It is very obvious when this occurs, but it’s all part of the fun that is this absurd experience. The kind of cognitive dissonance created by knowing that the body on screen doesn’t belong to the actor we’ve been following is somehow both intensely unnerving and kind of hilarious.

Beyond the obvious visual dissonance, there’s the brilliantly manipulative script by Coggeshall that lulls the audience into a stupor in the first half of the film only to shock us to attention with a midpoint twist that made this viewer squeal with delight. After the initial asylum shenanigans leading to Leena/Esther’s escape, which are wonderfully violent and not to be discounted, the film seems to settle into a bit of a rehash of its predecessor, with Esther plotting and scheming to get over on her host family. But just when you think this is a movie you’ve already seen, the film takes a sharp left into crazy town and all bets are off.

While Fuhrman’s excellent performance is front and center, it is really her antagonist who pulls out all the stops this time. Julia Stiles as the Albright matriarch put the pedal to the medal in the film, out-crazying Esther at every opportunity, which is no small feat. The rest of the Albright family are perfectly adequate, but Stiles really runs away with this movie. Also worthy of note is the performance of Hiro Kanagawa as Detective Donnan, a local cop who starts putting the pieces together early on.

There’s a lot to love about Orphan: First Kill for those diligent enough to stick with it through the big twist. There’s a warm embrace of camp that we don’t often see, there’s very vivid and deliberate production design and camera work (from Possessor cinematographer Karim Hussain), there’s a self-awareness to the film that is endearing and never overbearing, and there are plenty of cheer worthy moments for fans of the first film that are looking for the same energy. Orphan: First Kill may not take itself quite as seriously as its antecedent, but it is having a lot of fun with what is clearly a bonkers premise, and fans of the franchise will love the places this prequel goes.