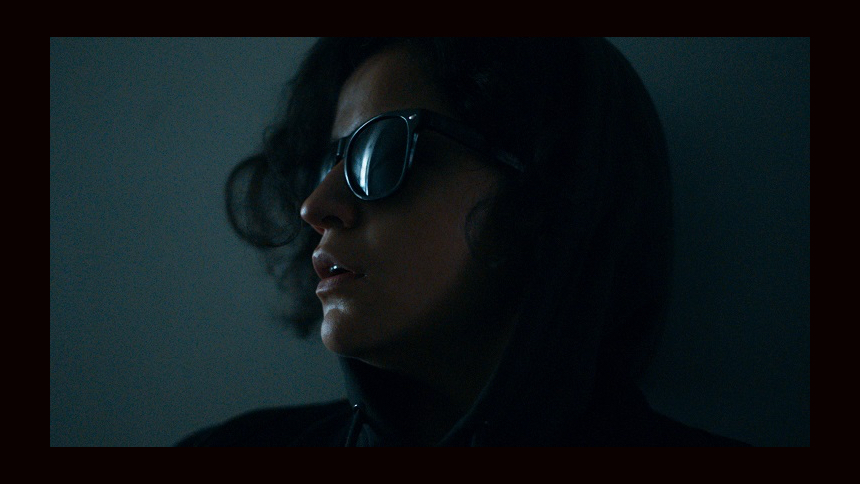 Millie Lies Low is a dryly funny deadpan character study of the titular deeply troubled sociopath, and her faux journey to a New York architecture firm Internship placement. Having recently beaten her best friend (Jillian Nguyen) and fellow classmate for the position, for reasons not yet known Millie (Ana Scotney, The Breaker Upperers) is overcome by a panic attack and desperately claws her way off the plane bound for the States from Wellington Airport.

Millie mills about, alot throughout this film it turns out, it is on the tin, 'lies low'. This translates into the brilliant non-verbal comedy, often minutes without dialogue, that give way to Millie's manic energy garnered mostly from her facial expressions. When she realizes what she has done, and that a one-way ticket is out of her price range she scrambles to hide her presence and take every opportunity possible to obtain the funds. When Millie's circumstances are further revealed the weight of expectations on her shoulder become evident.

Exposition of her situation, friends and family are doled out via Instagram posts and stories, which works naturally in the context that she uses her socials to go incognito. From the beginning Millie uses social media - pretending to be in transit, her 'chic' NY abode and then later in snowy New York itself. Her on-the-fly deceptions and fake background posts are hilarious, innovative, desperate and give a real insight into her crippling confidence and insecurities. Fractured phone calls to those who think she is on the other side of the world are peppered with white lies.

Millie attempts all sorts of espionage as she roughs it on the streets, awaiting her next flight, making increasingly poor decisions and risking discovery by going to house parties and even back to class. To exist in a space that sees you as absent is a surreal thing, and in disguise Millie is privy to all sorts of candid discussion about her.

Millie behaviour indicates she is incapable of relating, and has sociopath tendencies which makes for entertaining viewing, as the house of cards of fibs come trickling down. Her attempts to mitigate disaster increase it ten-fold - she burns bridges as they are being crossed so to speak. Real moments of anxiety come from an incoming message responding to her outlandish lies, a looming and long ... She and we question, are they convinced? There is only so long a poorly photo-shopped version of yourself on a page one image search photo can avoid suspicion.

There are some 'arty' moments in this Indie Comedy, like a choir's rendition of Miley Cyrus via montage, and an inspired 070 Shake "Tomorrow" dreamy dance party sequence, these scenes reflecting Millie's internal struggles. Her tonally quirky adventure gets a dark undertone as her antisocial behavior turns into misdemeanors, and crime. Millie finds destructive street-smart solutions to her problems, and meets the wrong people at the wrong time; paradoxically she lies low, not reaching out to family or friends. That is until her bad decisions result in one of the most quietly devastating scenes of complete awkwardness, cringe and piss soaked Vans.

Despite the trajectory of Millie's chaotic decisions there is purposeful redemption in Millie Lies Low, her heightened character is grounded and given context, it is not a pessimistic or hopeless experience as Millie sees it, as the end of the film breaks out of this subjective view.

Do you feel this content is inappropriate or infringes upon your rights? Click here to report it, or see our DMCA policy.
Ana ScotneyFilm FestivalMelbourneMelbourne International Film FestivalMichelle SavillMIFFMIFF 2022Millie Lies Low