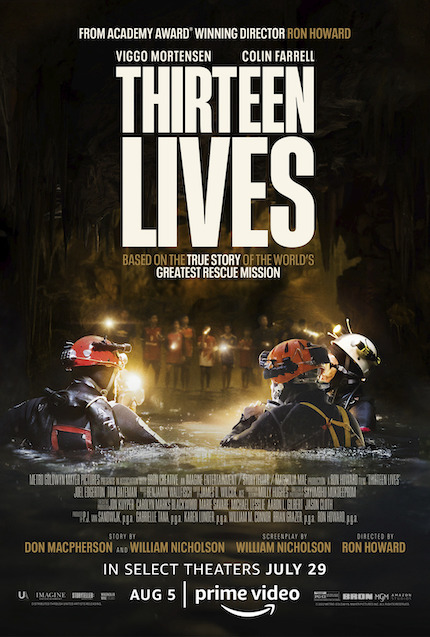 A twist on the “if it bleeds, it leads” credo of local news coverage, national and international cable news thrives on spectacle: Disaster definitely sells; impending and/or drawn-out disaster sells even better.

It can hold viewer engagement across hours, days, and weeks before collective amnesia takes over.

The Tham Luang Non cave rescue of 12 preteen and teen boys and their 25-year-old coach in Thailand during three weeks during the summer of 2018 is a rare exception, leading to not just contemporaneous news reports, but a made-to-order cash-in the following year, a well-received documentary, The Rescue, and now, after a global pandemic halted or otherwise slowed film production around the world, Thirteen Lives, a restrained, reverential, if myopic, dramatization directed by Ron Howard (A Beautiful Mind, Apollo 13, The Paper) with his usually restrained, classical approach to filmmaking.

Initially, Thirteen Lives focuses exclusively on those 12 boys and their football (soccer) coach, Ekkaphon Chanthawong (Teeradon Supapunpinyo), following them from an energetic match that ends in celebratory camaraderie before one of the boys fatefully suggests they go for a day hike inside the nearby cave system. With monsoon season a week or two away, the risk seems low that rain or flooding will pose any kind of significant problem.

Moments after they enter the cave system, however, a veritable rainstorm blocks escape, forcing them deeper and deeper into the cave system. With so many boys missing family activities simultaneously, a group of worried parents arrives at the caves and attempts to enter, realizing almost immediately that they can’t reach their sons.

It only gets worse from there as torrential rains continue to flood the cave system. The local leader, Governor Narongsak (Sahajak Boonthanakit), depicted here less as a standard bureaucrat and more as a well-meaning official attempting to navigate a politically difficult situation, ultimately gives way to what can be described as a whole-of-government approach, including Thai navy SEALs, local engineers, and a veritable army of volunteers. Despite the resources thrown at the problem, it’s not until two Brits, John Volanthen (Colin Farrell) and Rick Stanton (Viggo Mortensen), expert cave divers both, arrive on the scene to offer their expertise to the Thai government, that hope for the boys’ safety literally and figuratively resurfaces.

The arrival of Volanthen and Stanton, however, irrevocably shifts Thirteen Lives from a macro-level story about the boys and the international efforts to save them, to focus, sometimes exclusively, on the occasionally prickly relationship between Volanthen, an avowed optimist by inclination, and Stanton, his exact opposite in temperament and outlook.

Before long, the two-member rescue team turns into four with the addition of two other Westerners, Chris Jewell (Tom Bateman) and Jason Mallinson (Paul Gleeson), and later, once Volanthen and Stanton discover the boys miraculously alive, but still with no reasonable way out of the flooded cave system, the arrival of Richard Harris (Joel Edgerton), an Australian anesthetist and cave diver who becomes key to a seemingly untenable plan concocted by Volanthen and Stanton to bring the boys out safely over several days.

Thirteen Lives takes a methodical, procedural approach, dramatizing or recounting key events, periodically switching between the Brit divers, the Thai authorities or volunteers, and the families of the boys. Rather than draw or sketch out the families of the boys, Howard and his screenwriting partner, William Nicholson (Les Misérables, Unbroken, Gladiator), select Buahom (Pattrakorn Tungsupakul), the distraught, increasingly desperate mother of one of the youngest boys, to stand in for the rest. Almost always alone or apart from the other parents, both as a result of her being a single mother and being non-Thai (she’s officially stateless, as is her son and several others), it’s a plot device that only works sporadically and when it does, it's due to Tungsupakul’s deeply moving, heartfelt performance.

Despite Howard bringing his typically high level of craftsmanship to the proceedings, Thirteen Lives rarely feels like essential viewing, in large part due to Elizabeth Chai Vasarhelyi and Jimmy Chin’s (Free Solo) 2021 documentary, The Rescue, that already covered the same material, often resulting in a sense of deja vu whenever Thirteen Lives overlaps with its non-fiction predecessor. Splitting the focus between so many characters and groups also has a flattening, diminishing effect.

It’s not fatal, but ultimately makes Thirteen Lives feel like less like a passion project for Howard and his collaborators than a time-filler, albeit one that’s far from worthless, between far more personal ones.

Thirteen Lives will be released in select cinemas on Friday, July 29, 2022, before streaming on Prime Video on Friday, August 5.