Now on Blu-ray: POMPO THE CINEPHILE, Pure Pleasure, On Repeat 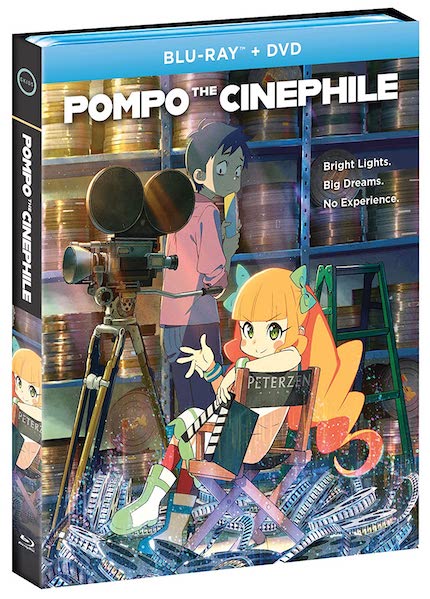 Anyone who loves movies wants to know more about them.

Pompo the Cinephile
Now available on Blu-ray and DVD, as well as Digital, from GKids and Shout! Factory.

As I wrote in connection with the film's North American theatrical release earlier this year: "What makes Pompo the Cinephile different from the zillion other movies that people have made in recent years about making movies is that director Hirao Takayuku builds the film around characters who are actually likable, not terribly spoiled or entitled or blinded to recognizable human emotions or people we are intended to love, even though they are truly rotten individuals who just happen to write, produce, direct, or act in movies and television shows."

So watching the movie again (and again, and again) is entirely a pleasant experience, as I discovered when I popped the newly-released Blu-ray from GKids and Shout! Factory into my player. Presented in 1080p High-Definition Wide (1:85.1), the colors look wonderfully dazzling and the picture, of course, is immaculately transferred, which is exactly what one looks for (and expects) in a recently-produced animated movie.

I started by sampling the audio commentary, and ended up watching that version all the way through. Featuring director Hirao Takayuku and two key crew members; film editor Imai Tsuyoshi's participation is especially fascinating, since I've often wondered what, exactly, a film editor on an animated film does, and he ably explains what and why he cuts sequences in a certain manner and his creative reasons for doing so, and to support the director's vision. The very enjoyable chat is essential listening, though best enjoyed after watching the film without the commentary.

The very lovely package includes one Blu-ray and one DVD; both include the audio commentary, as well as feature-length storyboards (for the entire film) and a quite lovely Character Design Gallery, plus trailers and TV spots. Both Japanese and English audio tracks are included, though I've only watched it in Japanese so far, with English subtitles; Spanish-language subtitles are also available.

More about Pompo the Cinephile