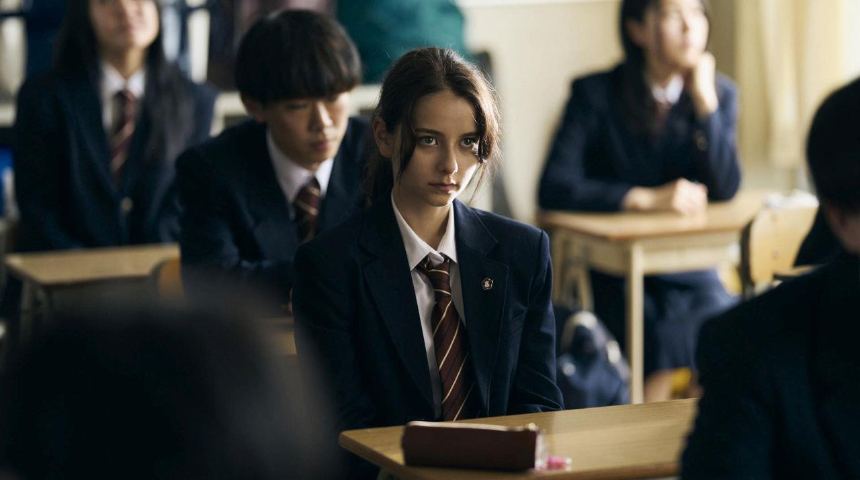 I have been told that Japan is a challenging country if you are not born there. But what if you grew up in Japan without being born there?
We first meet high-school senior Sarya at a traditional Kurdish wedding in a verdant park. Her subtle body language, and half-a-step back from the main party, shows her reluctance to participate in the singing and dancing, with her community. Moments later she is on the bus back to her home in Saitama prefecture, just outside of Tokyo. She vigorously attempts to scrubs off the red dye on her hand from the wedding ceremony.

This elegant, and straightforward, kind of storytelling in My Small Land builds slowly and powerfully, in its examination of the challenges of not only of the draconian and labyrinthine immigration process in Japan, but also the pressures generationally and culturally placed on children of a certain age.
Sarya lives with her younger sister, her even younger brother, and their father in a small apartment above a laundry, along with a small cluster of Kurds in the local community. Her father fled Turkey to Japan as a political dissident, and has been going through the refugee process for most of Sarya’s 17 year-old existence. Her memories of the motherland (and her deceased mother) are distant and vague. Her Japanese is, however, flawless.
She on the cusp of graduating high school with honours, and applying to universities, while working at a convenience store to help pay the bills. She translating forms and helps her Kurdish neighbours with their errands and appointments, particularly the ones whose Japanese is not very strong. Her younger sister tells her “Not everyone tries as hard as you,” and scolds her for enabling her elders to not assimilate further. He father demands she be present for dinner, in spite of the juggle of all of her responsibilities.
Sarya lies to her classmates that she is German, because it is easier than explaining the complex history of the Kurds, and it is clear that small lies become a kind of mortar to patch the disparate cracks in her existence. Nevertheless, she has assimilated well, has impressed her teachers, and is even pursing a shy, tentative, courtship with her young co-worker, Sota, at the shop. In a quiet moment, she lets Sota in on her families heritage, and introduces him to her dad. It seems like she is finding some balance between her roots, her family, along with her future in Japan.
All of this comes to a halt when her father learns that his refugee application has been denied and all of their VISAs are instantly expired. He is no longer allowed to work, access education or health care for the family, or even cross prefecture lines without express permission from the government. The bureaucracy feels cruel and disinterested, even as the bureaucrats and lawyers do their job with quiet competence.
Overnight, Sarya’s continued education, her job (the store is located just across the bridge in Tokyo Prefecture), and the families finances become impossible. They cannot return to Turkey, either. The help from their community is not enough. Her former boss, as well as Sota’s family, offer some money, but their efforts come across as an offering cash and food to assuage their own guilt, and helplessness. There is an uncomfortable pall of silent shame, but there are no easy villains here, other than Japanese omotenashi, the collective culture of hospitality.
What follows is heart wrenching. Bring tissues, as you will need them.
Kawawada, who trained and worked for Kore-eda Hirokazu, before directing this, her first feature, is never didactic, or sensational, or even political. Making use of Roger Ebert’s concept that ‘cinema is a machine of empathy,’ she systematically builds the narrative out of long (but not too long) takes and a still camera. This is an accessible film by design. There is almost no score, however the constant shift of spoken languages from Japanese to Kurdish in Sarya’s life seems to fulfil this purpose. Kawawada lets the audience observe Sarya’s challenges, choices, and small victories at their own pace; occasionally offering a loaded visual symbol, the watering of an olive tree, a conversation between on bridges, glass walls with tiny holes, the aforementioned scrubbing of hands.
Lina Arashi, who is in every shot of the film, delivers a powerful, subtle, and meticulous performance of a teenager who struggles with every facet of her life, identity, and a continually worsening situation that small lies can no longer bridge the gap. This is a star making performance. I hope the cinematic firmament has as place for this actor of Iranian-Japanese descent going forward.
My Small Land takes a complex and very emotional deep dive into the unique generation gap between Sarya and her siblings, who have only the vaguest memories of their Turkish home, and her father (and the community) who continues to live in the homeland in his heart, while never really committing to Japan. Her father is a complicated man, who only remembers the past, but is denied to return to it, for threats of violence or death. He is harsh at home in imposing the culture on his children, he comes at it from a place of love. This is often the case, and the tragedy of family.