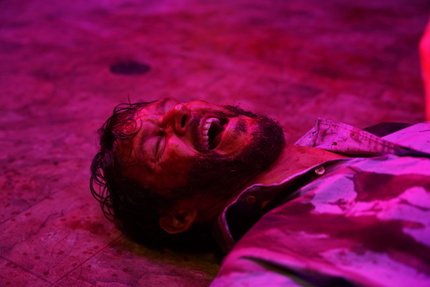 There is a certain level of hell that can only be reached by the most heinous of hangovers. For those of us who’ve been there – maybe more than once – it feels like you’re going to die, you’re going to do it slowly, and you’re going to do it alone. But what if you weren’t alone, you were trapped in a disgusting rest stop toilet stall with a demanding neighbor ignoring your requests to vomit in peace? What if that neighbor was more than human and less than hospitable?

Wes (Ryan Kwanten) finds himself in just such a situation following an all-night bender resulting from a breakup with his girlfriend. Parking himself at a rest stop, Wes gets absolutely loaded in what is first an attempt to forget her that eventually evolves – as alcohol is known to facilitate – into becoming a whining, puking puddle of regret. Stepping into the men’s room to expel the demon booze in the morning, Wes is engaged in conversation by a chatty fellow (J.K. Simmons, just as intimidating as ever, even without appearing on screen) who doesn’t seem interested in Wes’s requests for solitude in his misery.

The Voice seems to know more about Wes than a stranger at a rural rest stop should and tells the broken-hearted barf machine that he is needed for a higher purpose. Wes is not interested, tries to leave, and shit gets very weird and very dark, very fast.

One of the most incredible and engaging uses of a single location in recent memory, Rebekah McKendry’s Glorious is a fun, gooey, occasionally mean-spirited, but very creative cosmic horror that brings a new level of grossness to a location already thought of as super gross by most who are forced to use it. The vast majority of Glorious takes place inside of this rest stop restroom, with Wes confronting and being confronted by the disembodied Voice who gets more and more demanding as time goes by and his inebriated captive tries harder and harder to escape this new nightmare.

The Voice lives inside of a toilet stall, on the other side of a wall equipped with an elaborately illustrated glory hole, which would seem a perfect venue for Wes to take a peek and size up – so to speak – his tormentor, but it quickly becomes clear that that is not a good idea. Who, what, and why The Voice needs Wes to stick around is a big fun mystery that the film take great joy in slowly unveiling in the opening reels and then with an ecstatic burst of exposition toward the end. Suffice it to say, it is gooey, gory, and gross in all the best ways.

McKendry and her writing team of Joshua Hull, David Ian McKendry, and Todd Rigney work wonders with what is essentially a one-and-a-half hander in Glorious, as Kwanten’s Wes is the only on-screen character for about 85% of the film’s seventy-eight minutes and he’s mostly playing against The Voice. A few smartly placed flashbacks aside, this is Kwanten’s show, and he really makes a meal of it in the best possible way. Running the emotional gamut from terrified to confrontational, emotional frail to vehemently defiant, he carries the film effectively in increasingly absurd circumstances.

The single location is a fun hook, one which McKendry helps to evolve through clever production design and plot machinations. The Voice’s stall takes on a life of its own, becoming more and more animated and visceral as the film plays out, with shades of Eldritch horrors, Lovecraftian mystery, and lots and lots of goo turning this already gross location into a truly wretched and damned place. It is, pun slightly intended, Glorious.

Glorious marks a step in the right direction for McKendry in her third outing. More mature writing and execution and an understanding of how to make the most out of a small story and single location make the film a clear improvement over her 2018 Christmas horror, All the Creatures Were Stirring. Kwanten and Simmons also bring an air of gravitas to a very silly idea that needs to carry some pretty heavy emotional weight – and the blistering pace and sub-eighty minute run time sure don’t hurt.