Review: MAIKA: THE GIRL FROM ANOTHER GALAXY Warms the Heart and Gladdens the Spirit 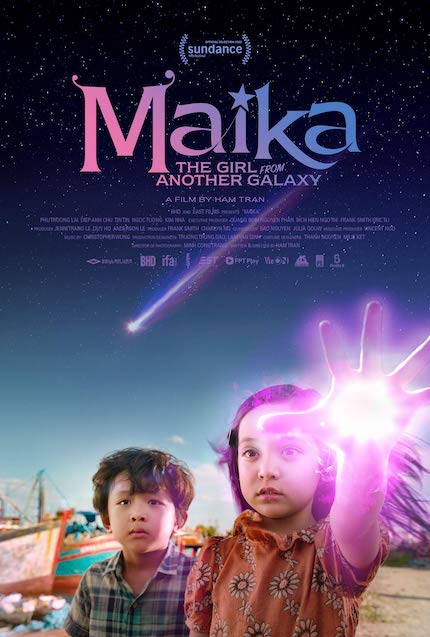 Once a visitor from another planet arrives in the form of a little girl, my thoughts quickly fled to Steven Spielberg's little green man movie.

In point of order, however, Maika got there first. Or, rather, Spadla z oblakov (English: She Fell From Clouds), a "Slovak-language sci-fi TV series for children created in 1978," per Wikipedia, which this film's press notes say "became a cultural sensation in Vietnam throughout the 1980s and 90s." The series was based on a book by Czech writer Václav Pavel Borovička, which was first published in 1967.

With all that in mind, it becomes easier to enjoy Maika: The Girl From Another Galaxy, adapted for the screen and directed by Ham Tran, as a film that softly lobs its gentle softballs, made of love and tolerance, to its intended audience (children) and nostalgic adults who remember the series from their younger days in Vietnam (or Norway, Russia, Germany, Poland, Cambodia, Hungary, Bulgaria, Spain, or Mongolia, all countries where the series also aired under different titles).

The film begins with young Hung listening to a lovely story told to him by his beloved mother as she lies dying on a hospital bed, her inconsolably sad husband Thanh sitting nearby. To deepen Hung's grief, My, a close friend, soon moves away with her family, leaving Hung alone with a father who is not dealing well with his loss.

Hung's spirits are lifted when he encounters a young girl, apparently the same age as him, at a nearby lake. Soon dubbed Maika, little does Hung know that Maika is a visitor from another planet. (When she starts speaking Vietnamese from her in-body computer, he assumes that's why he couldn't understand her previously, because she's speaking with a Hanoi (Northern Vietnamese) accent, and Hung lives in southern Vietnam.)

The two quickly develop a friendship, which Hung badly needs, in spite of the clumsy attempts by the oafish Beo, a well-off neighbor boy, to befriend him. Meanwhile, Hung's father, Thanh, is sinking under a mountain of debts, which preoccupies him and causes him to pay less attention to his son than he needs.

Miss Trang, a nurse who attended to Thanh's wife in hospital, does her best to befriend him by bringing business to his tiny phone-repair shop, and perhaps be something more to him when he's ready.

Providing mild levels of threat are a billionaire, Dai Nghia, who becomes suspiciously interested in Maika's possible origins on another planet, and a couple of adult bullies who pressure people living in Thanh and Hung's building to sell so their boss can build a new luxury high-rise complex.

It's a lot of moving parts. Sometimes, it feels like writer/director Ham Tran wanted to include every (presumably) beloved character from the original TV series in a feature-length film, so it gets crowded.

The overall spirit is lovely and gentle. When visual effects are included, they enhance the story, rather than distract from the narrative. The characters are well constructed, and director Ham Tran elicits good performances from his young actors, and supportive turns by the adults.

As is often the case, I was most taken with the distinctively different approach and cultural perspective brought to a warm-hearted story for children. On that basis alone, it's easy to recommend Maika: The Girl From Another Galaxy as an all-ages film for all audiences.

Do you feel this content is inappropriate or infringes upon your rights? Click here to report it, or see our DMCA policy.
Ham TranVietnamKim NhaTin-TinDiep Anh TruAdventure