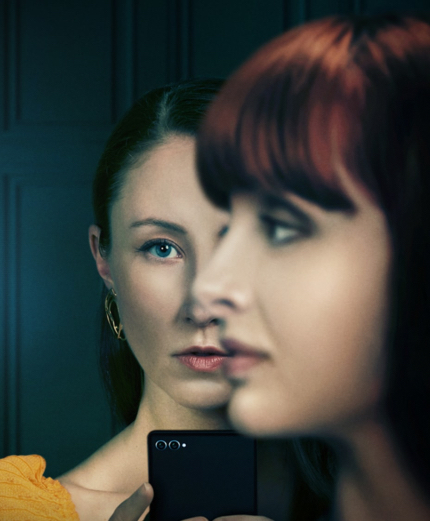 A young woman named Becky Green (Erin Doherty) starts her day like any other, checking messages, checking social media, exchanging testy words with her mum and promptly apologizing when she remembers that her mum can't remember things so well anymore, then heading off for a new temp job as a secretary.

Pretty ordinary, right? Except Becky uses things she learns at her day job to gain entry to an exclusive art/charity event that same evening, where she dresses up and pretends to be her temp boss' wife. She plays the part well; she looks every bit an elegant party girl who belongs, to the point that she instantly sparks with a handsome bloke named Josh (Brandon Michael Hall) and they spend the night together.

It's a mistake, and she regrets it in the morning, especially when Josh quickly susses out that she is not who she claims to be. By then, it's too late, and the rather ordinary Becky has refashioned herself Sasha, recently returned home from Japan.

Becky/Sasha engineers things so she can encounter Livia (Pippa Bennett-Warner), the previous evening's event planner, and sets about befriending her and her small group of devoted friends, who are all grieving the recent death by suicide of their friend Chloe (Poppy Gilbert). None is grieving more than Elliot (Billy Howle), Chloe's wealthy boyfriend, who becomes a target for Becky/Sasha's affections, all while Josh circles the group, a friendly outsider who knows (some of) Becky/Sasha's secrets.

Created by Alice Seabright, who also wrote four of the episodes and directed the first three, the series develops its mysteries organically. Initially, Becky appears to be nothing more than a harmless social climber obsessed with social media, a 'wannabe' with a desperate yearning to belong.

As she draws closer to Livia, and then to Elliot, her motivations become more intense and, possibly, more personal. Frequently she flashes back to earlier memories of Chloe, but are those memories or fantasies? Did she know Chloe in the past? What, exactly, is their connection? Why is she so obsessed with Chloe?

Seabright and her creative collaborators, including writers Kayleigh Llewellyn and Poppy Cogan, along with director Amanda Boyle, stake out mysterious and alluring paths for their characters to take. They are all suffering from Chloe's death, which caught everyone off-guard and has left them questioning their own relative guilt. Why didn't she tell me she was in such pain? What should I have done? Why didn't I notice?

Everyone grieves differently, of course. Sometimes the pain cuts deeper and lasts longer than anyone can anticipate. Who wants to ever imagine that a close friend might take their own life?

Remarkably good, Erin Doherty captures the full range of emotions experienced by her character. The cast is quite good; I thoroughly enjoyed the performances by Pippa Bennett-Warner and Billy Howle, whose characters also shift moods and change temperatures over the course of the show.

In her performance, Erin Doherty stirs many emotions, especially grief and remembrance and how it can affect every aspect of our lives. Everyone grieves differently; sometimes it makes you stronger and more determined to overcome emotional obstacles and get on with life, if you possibly can.

Do you feel this content is inappropriate or infringes upon your rights? Click here to report it, or see our DMCA policy.
Alice SeabrightBBCBilly HowleErin DohertyPippa Bennett-WarnerPrime VideoUK