Rosie Perez plays a supporting role but is the star of the bilingual crime series, debuting globally on Apple TV+. 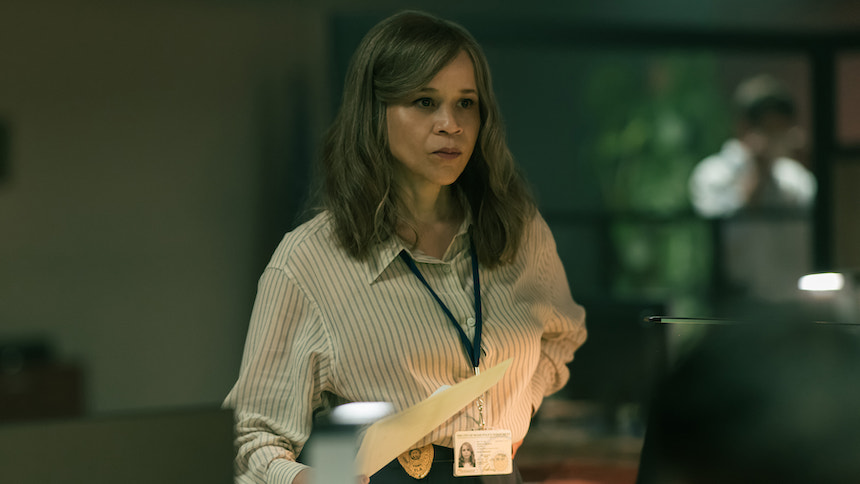 Now and Then
The first three episodes debut globally on Friday, May 20, exclusively on Apple TV+ . Subsequent episodes will debut every Friday. I've seen all eight episodes.

As a native English-speaking person of Mexican (and Irish) descent, and only limited Spanish fluency, I've certainly seen my fair share of Spanish-language narrative series (without English-language subtitles), though the typical length and programming of telenovelas, usually aired nightly for multiple weeks before wrapping or pausing, dissuaded me from more than a passing familiarity.

Thus, once I realized that Now and Then fell into the yawning chasm of many telenovelas, revolving around heightened melodrama and unexpected family revelations, my interest began to wane steadily. What kept me watching throughout the show's eight episodes, most running less than an hour, was Rosie Perez.

Her authentic believability always shines through in her performances, no matter what character she may be playing. Her sheer force of personality overrides whatever blemishes may be readily apparent in her role; she's always likable, a down-to-earth person, someone for the audience to identify with and root for, no matter what she does.

From its premise, Now and Then sounds like a bilingual twist on Lois Duncan's I Know What You Did Last Summer, first published in 1973, in which a group of teenagers cover up an accidental death. That premise was officially bludgeoned to death in a Prime Video streaming series last year that giddily played with reality, pushing the whole thing into chaotic nightmare territory.

Now and Then feels sedate by comparison, though it definitely contains more than one sequence that takes an ax to reality, in harmony with the requirements of heightened melodrama. (To be clear: I like melodrama. Just ask anyone who knows me in real life.)

Created by Ramón Campos, and Gema R. Neira who wrote all the episodes with their team, with Campos serving as showrunner, one of the more appealing aspects of the show is that it's entirely bilingual, with nearly all the characters switching easily between Spanish and English throughout. This feels quite authentic to me; even if you're completely fluent in two or more languages, sometimes you can only express exactly what you want to say in one language or the other. The other great thing is that the series is set in Miami, Florida, U.S., and so feels true to its location.

The first episode is directed by Gideon Raff, who also helmed the final two episodes. He's a powerhouse talent (see The Spy, for example) and he infuses the series with as much stylish excitement, and well-timed confusion, as possible. A little goes a long way, though, and the relentless plot machinations grind slowly. Introduced as fun-loving, but ambitious, young people at the height of their physical powers upon their graduation from college, the tight group of friends gathers to celebrate that occasion and make known their fondest wishes for the future.

It all comes crashing down before the night is over, though, and the survivors are wracked with guilt. Their close bond is torn apart and their lives will never be the same. Twenty years later, they are reunited and must finally grapple with the consequences of their actions.

Through it all, Rosie Perez investigates. The initial investigation represented a major turning point in her life, especially since it was her first case as a police detective, learning from her highly-respected veteran partner, Zelijko Ivanek, who oozes sage advice. Twenty years later, he's retired, and Rosie -- portraying Flora, now a mentor herself to a young detective -- remains dissatisfied about the unsolved original case, and is eager to investigate a new suspicious death that she is sure is linked, somehow, to what happened in the past.

The survivors have each devised their own methods for dealing with their shared guilt, but a group text message threatening blackmail changes everything. The show flips back and forth between the initial death and the present traumas, as threats and arguments form the backbone of every discussion.

It becomes tiresome. The only reward was watching Rosie Perez rise above her material once again, giving me hope for the future of mankind.

Do you feel this content is inappropriate or infringes upon your rights? Click here to report it, or see our DMCA policy.
Apple TV+Ramon CamposRosie Perez