Now Streaming: I KNOW WHAT YOU DID LAST SUMMER and ONE OF US IS LYING, YA Death and Suspicion

Director Sophia Takal bumps one series above the other. 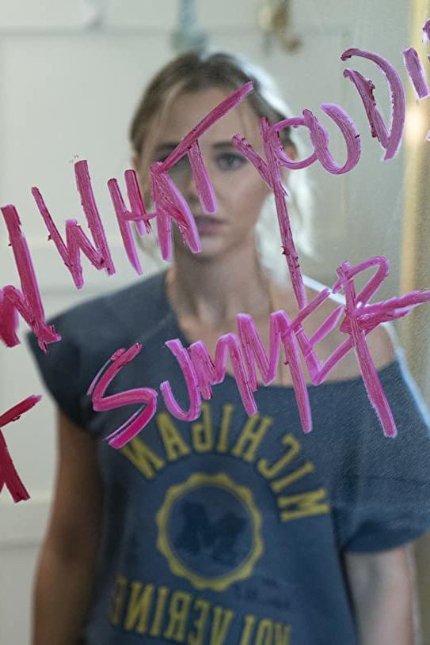 I'm glad I'm not a teenager.

Two new series circle around the death of a teenager and the suspicions that are aroused among the individual's friends. Both showcase lithe young bodies, rampant rebellion, and murderous instincts. Both feature diverse casts, including one group member in each series who slings drugs. Both are adaptations of source material published in another medium. Both slide back and forth from present to past and back again.

From there, the two series diverge, creatively and in their release patterns.

Set in present-day Hawaii, the first episode introduces a clearly troubled Lennon (Madison Iseman) as she bounds down a highway. She is returning home to her father, one year after a high-school graduation party that led directly to a fatal accident.

I've never read the book or seen the movies, but it's not a spoiler to say that the group of teenagers, including Lennon, are thereafter bound together by a secret about what they did that night. Writer and executive producer Sara Goodman (Gossip Girl, Preacher) promptly flips the script with a clever twist that justifies the extended length of the series over the original movie.

Aggressively coarse, the series offers a deep dive into the lives of young people who are relentlessly profane and completely self-absorbed, even as they see bodies begin to pile up. Suspicion begins to fall upon each of them, either as a possible killer or a likely victim. Who might die next?

The characters are the key to the success of any series. If you can identify with, root for, or root against one or more of the characters in an ensemble-driven series, chances are good that the series will be more appealing and drive continued viewership.

Even though I was able to watch the first four episodes in advance, it felt like a chore, like I was being pelted with rotten fruit every time I stepped outside. A lot of that is likely due to my age; I feel like Clint Eastwood growing at kids to 'get off my lawn!'

The murder victims are shown in bloody, often grisly detail, which qualifies this as a horror series. The current generation of young people may, in fact, be reflected well in the series through the characters' very troubled lives, which may be an ever greater horror. Your mileage may vary. 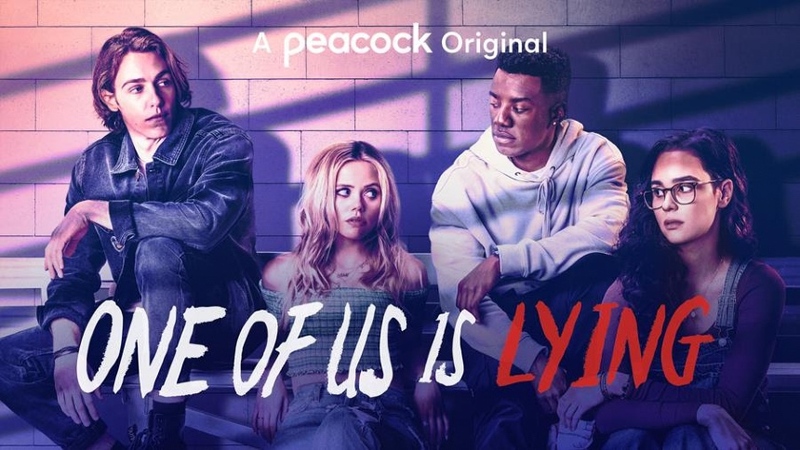 One Of Us Is Lying
The first six episodes are now streaming on Peacock. I've watched all six episodes. Episodes 7 and 8 will begin streaming Thursday, October 21.

Director Sophia Takal (Black Christmas, Into the Dark: New Year, New You) elevates the series in episodes 4 and 5, which are distinguished by her staging, framing, and pacing.

Jennifer Morrison directed the first of three episodes that debuted last week, which started on the wrong foot for me because the series threatened to plunge deeply into a toxic, unpleasant atmosphere, filled with unlikable characters.

After watching all six episodes that have debuted so far, though, I realize that the first episode was a set-up.

Five teenagers in their senior year of high school are penalized for various misdeeds by having to spend time in detention. The Breakfast Club scenario swiftly morphs into a murder mystery when one of the young people succumbs to poisoning. Naturally, the other four are immediately suspected of his murder.

Though all five young people initially appear to be toxic and somewhat repulsive as individuals, the four survivors are soon shown to be empathetic human beings, with recognizable personality quirks, as captured and portrayed precisely by Annalisa Cochrane, Chibuikem Uche, Marianly Tejada, and Cooper van Groote, along with Melissa Collazo as a younger sister and Jessica McLeod as the best friend of Simon (Mark McKenna), the lad who dies.

Simon is unrepentantly smug and self-righteous, but he's dead, which makes it very difficult to empathize with whatever troubles he was experiencing that made him so hostile and unkind to nearly everyone he encountered. But because the survivors are doing their best to solve the murder, and are pretty open about their troubles and weaknesses and crushes and crimes, it makes for a more watchable series.

In the episodes directed by Sophia Takal, which are worth savoring, the murder-mystery series comes into its own.

Do you feel this content is inappropriate or infringes upon your rights? Click here to report it, or see our DMCA policy.
Amazon Prime VideoPeacock TVUS