Review: IN FRONT OF YOUR FACE Defies Conventional Romances 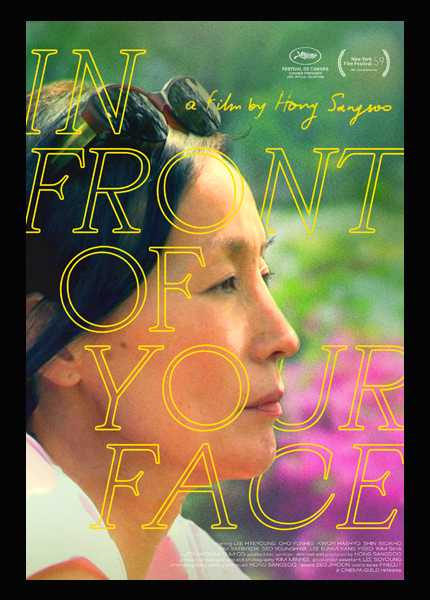 The voice-over that starts Hong Sang-soo's In Front of Your Face is more like a prayer.

It belongs to Sang-ok (Lee Hye-young), a serene faced, aging beauty crashing on the couch in her younger sister Jeong-ok (Cho Yun-hee)'s high-rise apartment in the sprawling suburb of Seoul. Living abroad, she is visiting her sister for the first time since their mom's funeral long ago. Again, her narration has a feel of detachment and a confessional. Something is up.

So starts yet another wry snapshot of life by Hong, who remains prolific as ever, presenting two films in last year's New York Film Festival. But In Front of Your Face turns out to be a much more emotionally invested affair, if less inventive structurally and narratively from a formalist standpoint.

Over the morning coffee, the sisters commiserate about their lives. Jeong-ok is rightfully miffed that Sang-ok never contacted her for all these years and never visited. The older sister is quite cagey about her life story, but the her narrative is pretty typical immigrant story: financial hardships, peripheral jobs, no savings, unlike native Koreans who seem to have a lot of money to buy real estates in a housing boom, Sang-ok observes.

It is springtime and everything is in bloom. The greenery surrounding mega vertical structures, in Hong's minimalist aesthetics, complete with auto zooms, looks oppressively sweltering, rather than calm and refreshing. It turns out Sang-ok was a famous actress as some fans recognizes her in the street, on the way to a meeting.

It is revealed that she is in Korea partly to have a meeting with a film director later that afternoon. But again, she is tightlipped about it. Jeong-ok drags her around to show her new real estate developments, in the hopes of having her estranged older sister come back to Korea permanently and settle down near her.

After splashing some ddukbokki (spicy rice cake) juice on her blouse at her nephew's small snack shop, Sang-ok is off to see the film director. On the way there, though, she stops by an old house where she grew up, which now is a fancy gift shop. She immediately regrets her visit, beating herself up for being nostalgic and sentimental, because as her zen-like voiceover has been suggesting, she intends to live only in the present, to 'seize the day'.

The meeting with a film director (played by Hong regular Kwon Hae-Hyo) takes place in a bar in a trendy part of Seoul. He arranged a meeting so they can be alone together. He is a big fan ever since he saw her films in his youth in the 90s and wants to do a film with her.

After a Chinese food delivery, along with copious amount of liquor, the truth comes out. She only has five or six months to live. Heartbroken, they cry and laugh together. The director then suggests they take a trip together the next day to Kangwon province; he would like to make something very quick and capture her on film as much as he can.

She asks him if he wants to sleep with her. They have a moment. It's raining outside and all so romantic. It's a scene right out of some fatalistic French romance movie. Would Hong really end a movie like this?

In Front of Your Face may lack Hong's narrative and structural inventiveness but it has a nasty hook that gets you at the end, defying the conventional romance narrative. It's wickedly funny, too.

Lee Hye-young, who started her career in Lee Jang-ho's salacious Korean classic Between the Knees (1984) and starred in countless TV dramas, is a revelation here. Her graceful features and beauty dominate the screen in a bittersweet performance. Her hysterical laugh at the end listening to a voicemail over and over, is the funniest/saddest film moment of the year. I really adored this film.

Review originally published during the New York Film Festival in October 2021. The film opens May 6, Film at Lincoln Center, via Cinema Guild, and will subsequently roll out nationwide. Visit the official site for locations and other information.

In Front of Your Face - Official Trailer from Cinema Guild on Vimeo.

Do you feel this content is inappropriate or infringes upon your rights? Click here to report it, or see our DMCA policy.
Cho YunheeCinema GuildHong Sang-sooHye-yeong LeeKoreaKwon Hae-hyo

More about In Front of Your Face