Review: UNDONE, Beware Digging Into the Past 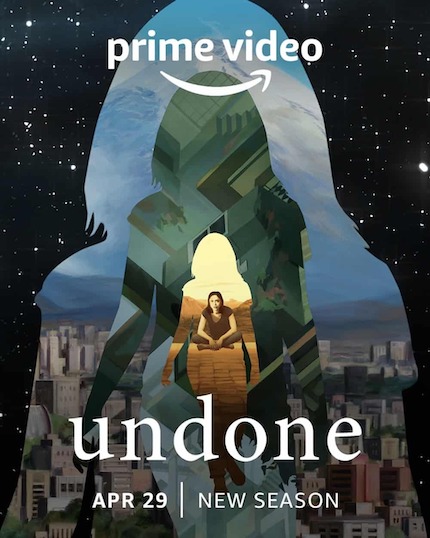 Trying to 'fix' things can be fraught with danger.

The second season of the animated series picks up right where the "brilliant" first season concluded in September 2019. (I'm self-importantly quoting my own review.)

The first season found Alma Winograd-Diaz (Rosa Salazar) at a crossroads in life, unhappy and mired in malaise. Over the course of eight episodes, Alma came to learn that her vague discomfort with the very idea of family, rooted in the loss of her physicist father, Jacob Winograd (Bob Odenkirk), at a young age, could be changed forever.

The second season begins with Alma discovering that she and her father, who wasn't as dead as everyone thought, have changed both their lives for the good. Everything seems much, much better for them, as well as Alma's younger sister Becca (Angelique Cabral), who is now newly married to the love of her life.

Their mother, Camila Diaz (Constance Marie), appears to be in a better place, but appearances can be deceiving, as Alma soon learns when Camila decamps under mysterious circumstances to visit her family in Mexico, prompting Alma and Becca to follow her. Somewhere in there, Alma realizes that Becca shares some of their father's metaphysical abilities.

Alma, ever the instigator, very much wants to help her family to heal from past traumas, but that's even more complex than it sounds. Her family may have the ability to travel back and forth within certain timelines, yet they are not able to completely control what happens and when.

The show explores the maddeningly elusive idea of why anyone acts in the way they do; is there a particular reason why you do this or that? What caused you to act in that manner? If you could, would you change what you did in the past? And what further damage might be done as those changes in the past ripple through time to the present day?

Other shows have wrestled with this idea, some quite successfully, as in Russian Doll, which just dropped its second season last week. Similar to that show, creators Kate Purdy and Raphael Bob-Waksberg display a fascination with the concept/idea of time travel, yet are primarily interested in how their characters react to and act upon the idea, and how those ramifications affect their family members throughout time.

Because of the specific cultural milieu presented in Undone, its exploration of family strikes closer to home for me, personally. As I noted before about the first season: "The series resonates for me in its portrayal of a mixed marriage and the children who seldom think about the differing cultures that brought them together and made them unique." The second season takes a right turn of sorts, disappearing down a rabbit hole in its exploration of family from a Mexican perspective, and how it shaped Alma and Becca's mother and her perception of her 'proper' place in the family and in society.

The episodes, all less than 30 minutes, fly by, becoming more compelling as they proceed, sprouting new roots and encompassing even more family history that expands further and deeper. I may sound like a broken record, but I can't help quoting myself again: "Putting together the comic elements, the animation techniques, the dramatic heights, and the surreal aspects, as well as the love and affection between the characters, results in a show that I can only describe in one word: Brilliant."

Do you feel this content is inappropriate or infringes upon your rights? Click here to report it, or see our DMCA policy.
animationBob OdenkirkPrime VideoRosa SalazarUS