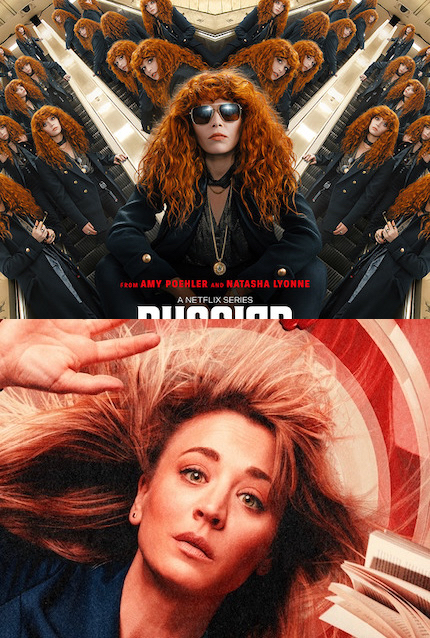 To get ahead, sometimes you have to go back.

Russian Doll
The entirety of Season 1 and Season 2 are now streaming on Netflix. I've seen all 15 episodes.

I'm very much tempted just to copy my comments on Season 1, which debuted in February 2019.

Many of those positive vibes also apply to Season 2, which debuted earlier today, and made me eager to binge it. My expectations were sky-high based on Season 1, which "flattened me emotionally." Though Season 2 doesn't have the 'surprise gut punch' effect from watching the first season. it avoids merely duplicating what worked before.

Natasha Lyonne's portrayal of Nadia Vulvokov is even more refined in its emotional impact. As the universe begins to shift things around, she is bewildered, but goes with it, knowing that she can't simply refuse to acknowledge that her reality is changing in profound ways which are beyond her control.

Season 2 digs more into Nadia's family history, the sort of things that made her who she is and the possible reasons for what happened to her mother, Nora (Chloë Sevigny), her grandmother, and her dear friend Ruth (portrayed by Elizabeth Ashley in the present day and Annie Murphy in 1982). Her best friend Maxine (Greta Lee) also returns, which provides a degree of stability for Nadia.

Fellow time-traveler Alan (Charlie Barnet) also returns, which provides food for the narrative train, both paralleling and diverging from Nadia's story. Nathasha Lyonne, who co-created the series with Leslye Headland, and Amy Poehler, writes and directs the first episode, as well as two others in the 7-episode season, while also co-writing other episodes. Her comic voice comes through strongly, but her dramatic talents are also evident in making the story deeper and more resonant.

In short: it's a winner, and you know now what to watch tonight, tomorrow, and/or over the weekend.

The Flight Attendant
The entirety of the first season and the first two episodes of Season 2 are now streaming on HBO Max. Subsequent episodes will be available to stream every Thursday.

Debuting in late November 2020, The Flight Attendant caught me off guard.

In part, that's because the series increasingly revealed itself to be much more than a foul-mouthed sit-com that followed the somewhat annoying Cassie Bowden (Kaley Cuoco) on her international travels as the titular character. She wakes up one morning next to a dead body in Europe, which casts her frenzied existence into a different light, as did the revelation that she was an alcoholic struggling with personal issues, as well as an asset for the CIA.

As the new season begins, Cassie has moved to Los Angeles, made a commitment to sobriety, and gained a new boyfriend, a photographer and fellow former addict who understands and cares deeply for Cassie. Quite quickly, however, she becomes an eyewitness to (probable) murder and is embroiled in yet another international incident. Her newfound coping abilities are put to a severe test, threatening her sobriety and her mental stability.

Developed by Steve Yockey, based on a novel by Chris Bohalian that was first published in 2018, The Flight Attendant aims to be a breezy, comic experience and largely succeeds, even as it incorporates serious dramatic issues, such as alcoholism and addiction recovery. Kaley Cuaco ably makes Cassie Bowden into a likable character, especially now that her personal issues are out in the open. She's supported by a mixed bag of supporting characters, including Zosia Mamet as her best friend, T.R. Knight as her brother, and Cheryl Hines as a CIA supervisor.

It's a fun series, especially for those of us who enjoy a little lighthearted spy adventure in our weekly viewing diet.

Do you feel this content is inappropriate or infringes upon your rights? Click here to report it, or see our DMCA policy.
HBO MaxKaley CuocoNathasha LyonneNetflixUS