Gabriele Silli's recurring craggy face and his smooth, clear voice guides us through the most unlikely places in an odd sort of Western adventure, directed by Alessio Rigo de Righi and Matteo Zoppis. 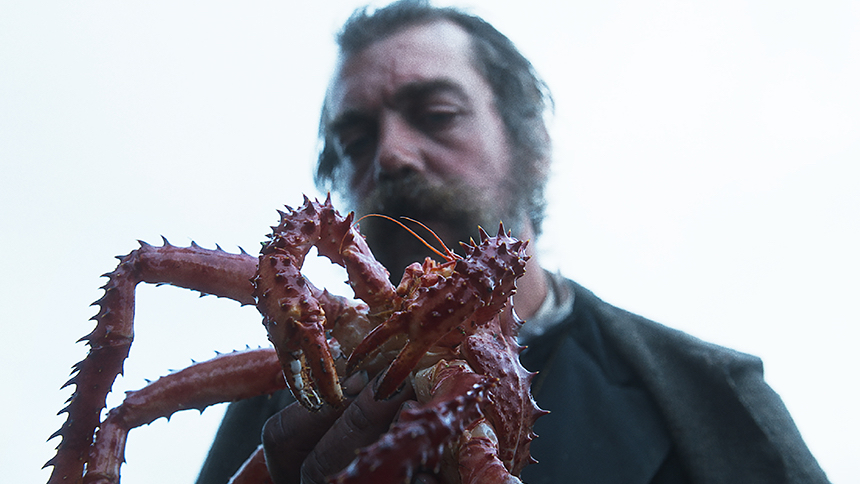 I am a fan of people's faces in films; the uglier and craggier the better. They tell thousands of untold stories on their own. No explanations necessary. And they leave lasting impressions long after I forget the plot of the films they peek their heads in.

Same here in The Tale of King Crab, by documentary filmmakers Alessio Rigo de Righi and Mateo Zoppis, trying their hands at fiction; in this case, a hybrid of documentary elements with fictional retelling of a folklore or two. The film starts in the present day with the old and craggy residents of a small town in Italy, all played by locals, telling each other a folklore that's been handed down from generation to generation. Their faces are so distinctive inside a dim hut, they resemble van Gogh's Potato Eaters.

They tell the stories about Luciano (Gabriele Silli), a local drunkard with a bad temper who abandoned his aristocratic lineage and made enemies with peasants and landowners alike. The stories go on, and we get to see them reenacted as Luciano falls in love with a sheepherder's daughter (all grown up Maria Alexandra Lungu, who played the memorable child lead in Alice Rohrwacher's The Wonders). But a local aristocrat landowner has the hots for her, and as he stops allowing locals to use his property as a footpath, it becomes a rallying cry for the hot-blooded Luciano. And their confrontation ends in tragedy.

Silli, too, has that face: A scar runs across his forehead, his beard is unkempt, and wild hair hides his past secrets, but it's his penetrating, steely-eyed blue gaze that stops you in your tracks. After burning down the village gate in a fit of rage, Luciano is banished to the end of the world (in this case, South America). But he resurfaces again as he takes the identity of a dying priest he met in the Argentinian wilderness and inherits a giant red land crab that works as a compass to find a hidden Spanish treasure beneath a mountain lagoon.

We don't get to know if the later half of the story is folklore or something the filmmakers came up with, because the narration of the local folks stops in the middle. After all, any stories handed down in oral tradition have thousands of additions and modifications.

Temporality is out the window: the first story might have taken place in medeval times, as the second one takes place decades later. Who knows? But the transition between the two stories is so smooth that you don't even notice or care, because you have already bought into Luciano's crazy adventure narrative and intrigue. The views are stunning as Luciano, the crab and other treasure hunters slowly venture up the rugged, unforgiving Andes mountains; the film becomes an odd sort of Western adventure.

Simone D'Arcangelo, cinematographer and DIT on various projects (Il Solengo and Woody Allen films), captures stunning landscapes and colors, resulting in a dated, Herzogian beauty on grainy 16mm film. The Tale of the King Crab is that rare breed of films which inhabits both past and present; harkening back to the ambitious days of cinema of the 60s and 70s, possessing the spirit of capaturing a fever dream that was/is cinema and all knowing modern sensibility to experiment and be playful at the same time.

The Tale of King Crab is an adventure in more ways than one. Silli's recurring craggy face with his smooth, clear voice guides us through the most unlikely places, both in the narrative and in its form, making a delicious concoction, worthy of its spectacular crustacean subject.

The film opens in theaters April 15 in New York and April 29 in Los Angeles, with a national rollout to follow. Please visit the official Oscilloscope website for more information.

The Tale of King Crab

Do you feel this content is inappropriate or infringes upon your rights? Click here to report it, or see our DMCA policy.
Alessio Rigo de RighiArgentinaGabriele SilliItalyMatteo ZoppisOscilloscopeSpainTommaso BertaniMaria Alexandra LunguErcole ColnagoAdventureDrama