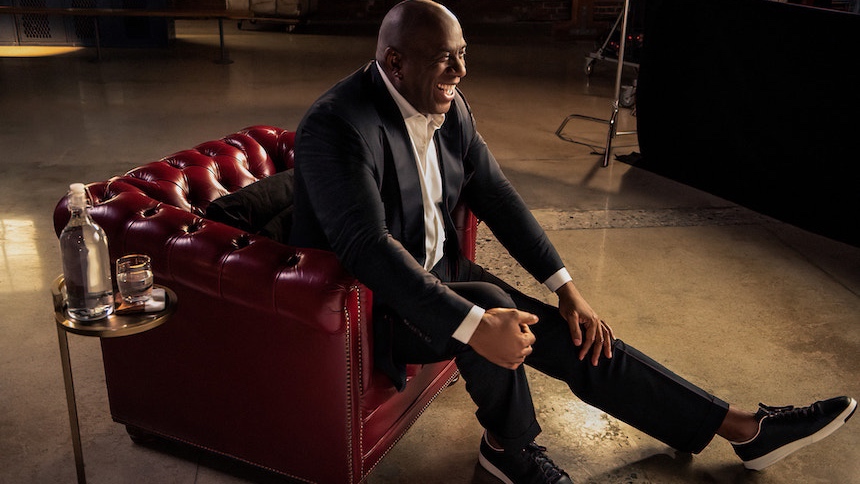 I was born and raised in Los Angeles during the 1960s. My parents afforded me few opportunities to see movies on a big screen, and our black-and-white televisions were tiny, so my attention turned to professional sports, which I could listen to on a cheap transistor radio. I grew up with great affection for hometown teams -- the Dodgers, the Rams, the Kings, and the Lakers -- and devoured everything I could read about them in local newspapers.

Thus, I've been hate-watching HBO's Winning Team lately, aka the series that tore creative partners Adam McKay and Will Ferrell apart. It's a weirdly put together show that endeavors to analyze and dramatize the period when the Los Angeles Lakers enjoyed great success on the basketball court and turmoil in real life. It leans very hard on the sensational aspects and, from a visual perspective, looks like an 8mm film that was left out in the rain.

Based on these factors, They Call Me Magic sounded like a soothing balm that would restore all my personal anger issues that have been amped up by the HBO show, which is still ongoing. Instead, it makes me wonder why anyone thought that Magic Johnson needed a hagiography that runs about four (4) hours. It's a story that could easily have been told within the confines of a traditional 90 minutes (or less), but the style nowadays is to stretch out the form in order to make it an event.

Still, for general, non-sports fans, the third episode stands out. It breaks down in detail the reaction to Magic Johnson's HIV diagnosis in 1991, how he dealt with it, how his wife Cookie handled it, how his teammates and, indeed, the world reacted. Issues that were raised then reverberate now, and the episode does a good and fair job in presenting and analyzing an event that profoundly changed lives.

The first two episodes are fine for sports fans, covering Earvin Johnson's early life, how he got nicknamed Magic, his brief college career, and his professional challenges and triumphs. It's filled with interviews and moves at a good pace.

Rick Famuyiwa (Dope, several episodes of The Mandolorian) directed, and he has a good sense of story. In these episodes, Johnson notes the major mistakes and missteps in his life, and it feels very forthcoming. After all, it takes a strong person to admit their weaknesses in person. It's in the fourth episode, dealing with his post-basketball career as a successful businessman, that things turn to endless adoration.

The third episode deserves the most attention, especially for non-sports fans, because it covers the most controversial and noteworthy year in Magic Johnson's life with an impartial eye.

Do you feel this content is inappropriate or infringes upon your rights? Click here to report it, or see our DMCA policy.
Apple TV+documentaryMagic JohnsonRick FamuyiwaUS