Clare Foy and Paul Bettany star in a torrid romance that curdles into something shocking to England in the early 1960s, debuting on Prime Video. 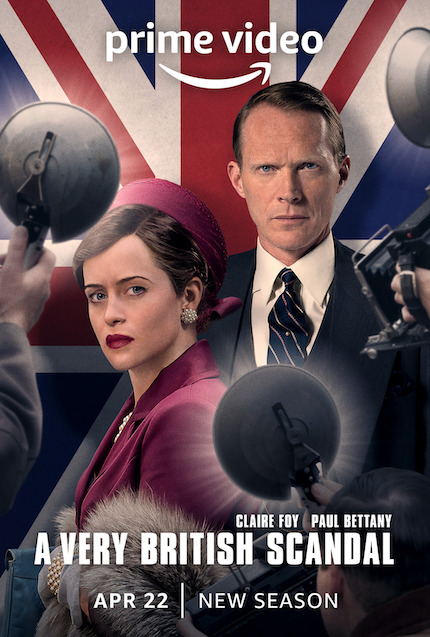 Marriage! Who needs it?

Their mutual attraction quickly ignites into a bonfire that consumes them both.

On a swaying train in the late 1940s, Marilyn Sweeny (Clare Foy), nursing emotional wounds from a marital split, meets Ian Campbell (Paul Bettany), the future Duke of Argyll, who is married to his second wife, Louise (Sophia Myles), but not terribly happy about it. Their attraction is immediate and powerful, slowly growing more intense as they become extremely comfortable together in public displays of affection.

By 1951, Ian was divorced and married to Marilyn, but theirs was not an altogether blissful union. Prone to drunken bouts and hopelessly addicted to gambling and prescription drugs, Ian abused Marilyn, physically and emotionally. He relied upon her greater wealth to pay for his extravagant lifestyle and to bankroll his historic domain, the Inveraray Castle. As they grew apart, Marilyn began taking other lovers, cultivating a life in London apart from the Duke.

Written by Sarah Phelps (The Pale Horse, The Dublin Murders) and directed by Anne Sewitsky, who has crafted quite a bit of episodic television series, A Very British Scandal is handsomely mounted, recreating the late 40s through the early 60s with elan and style. Back in 2020, I wrote that The Pale Horse "is far more interested in atmosphere and mood than any intricacies of the mystery that lies at the heart of the story." Although the show under consideration is not a mystery, it relies much more upon the atmosphere and mood than the characters to generate interest and empathy.

Perhaps, though, that is as it should be. The atmosphere in which the two fell in love/lust, married, and eventually divorced, clearly enforced tremendous, stultifying pressures upon them, and Marilyn was at a disadvantage: she was a woman.

According to British culture in that time period, she was expected to shut up and take whatever her husband dished out to her, even though she was, arguably, in a stronger position, owing to her greater financial standing. When she rebelled against the hamfisted structure that praised men, in spite of their abuses, and demeaned and belittled their victimized female partners, no matter what they had suffered, it was she who paid the price.

In the vivid performance by Clare Foy, Marilyn becomes a living and breathing human representation of mid century malaise. The bruises she suffers are a drag on her soul, even as her spirit remains fierce; she will not go down without a fight. On the opposite side of the ring, Paul Bettany superbly captures a British gentleman who is not much of a gentleman, lacking any inner strength, except the quest to satisfy only his own craven desires.

Splendidly written, directed, produced and performed, A Very British Scandal left me seething with contempt for those in power who don't know what to do with it.

Do you feel this content is inappropriate or infringes upon your rights? Click here to report it, or see our DMCA policy.
BBCClare FoyPaul BettanyPrime VideoSarah PhelpsUK