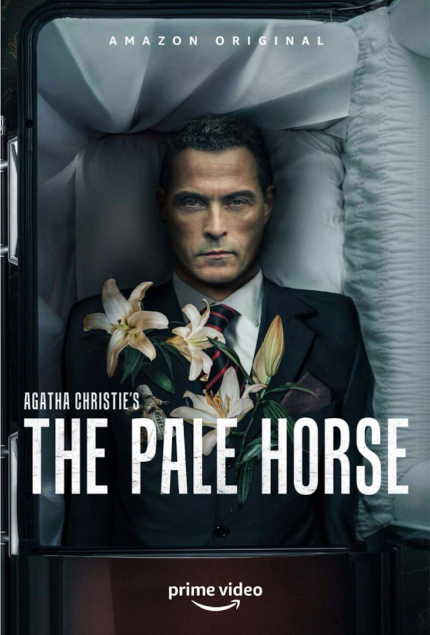 Where humans fear to tread.

Adapted by Sarah Phelps from Agatha Christie's novel, The Pale Horse is far more interested in atmosphere and mood than any intricacies of the mystery that lies at the heart of the story.

Upon reflection, this is not terribly surprising. Phelps' other recent credits, including the series Dublin Murders, as well as the Christie adaptations The A.B.C. Murders and Ordeal by Innocence, are soaked with a similar sensibility that lifts them into a strikingly different realm than more traditional Christie screen adaptations, like Murder on the Orient Express (either of the versions directed by Kenneth Branagh or Sidney Lumet).

That's not always an inviting prospect, though, as I discovered when I suffered through Ordeal by Innocence in 2018: "I'm perfectly alright with changing and charging up the source material, but I'd prefer to see something more discerning than simply flipping the characters into mean and nasty territory." But perhaps I was relying too much on my faded memories of Christie and her fictional characters.

For casual readers such as myself, she is best remembered as an acclaimed architect of brain-twisting mysteries, of which she wrote dozens. The third small-screen adaptation of The Pale Horse, first published in 1961, centers on Mark Easterbrook, an antique dealer in early 1960s Britain.

As portrayed by Rufus Sewell, he is a generally placid gentleman who has bottled up his grief over the tragic death of his wife Delphine (Georgia Campbell). Mark has married again and is still adjusting to the cool deportment of his new wife, Hermia (Kaya Scodelario), when he is contacted by the police because his name appears on a list found in a dead woman's shoe.

The mystery deepens after he travels to the rural community where the woman's body was found. Evidently, his first wife Delphine had some connection(s) there, such as a trio of witches (?!), and the names on the list are steadily turning up dead, and poor, dear Mark is increasingly bewitched as his life is turned upside down.

Director Leonora Londsdale captures Mark's ever-changing state of mind, which moves from puzzled to curious to befuddled to completely unnerved. Her compositions, which are just a little bit "off," match Sewell's increasing mannerisms, which suggest his slow loss of control and surety.

The supernatural angle is present, yet there's little to confirm that these crimes are anything too far out of the upsetting nature of seemingly unrelated deaths continuing to transpire. Sean Pertwee injects a measure of command into his role as Inspector Stanley Lejeune, while also tapping into the idea that truly "solving" these crimes may be beyond his grasp; he may be just as befuddled as Mark.

Summing up: Marked by intriguing and inviting ambiguity, The Pale Horse strides forward, trotting rather than galloping toward death and any possible solutions.

Do you feel this content is inappropriate or infringes upon your rights? Click here to report it, or see our DMCA policy.
Agatha ChristieAmazonGeorgina CampbellKaya ScodelarioLeonara LonsdaleRufus SewellSarah Phelps