Blu-ray Review: THE GIRL CAN'T HELP IT, In All Its Vulgar Glory 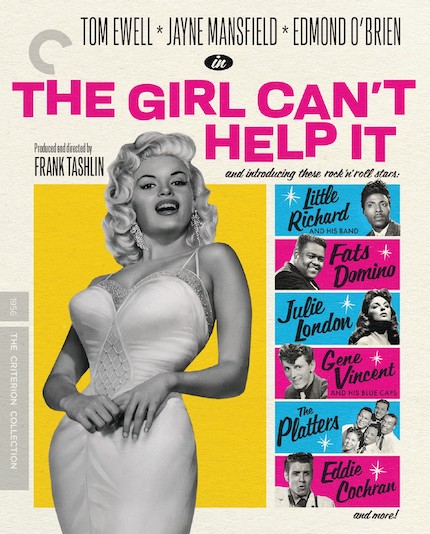 If I ever meet an extraterrestrial who asks me to help shed some light on America in the 20th century, high on its modern Earth watchlist would be Frank Tashlin’s The Girl Can’t Help It.

For my money, it is, not only the most joyous, but possibly also the coolest movie of the 1950s… and I am quite aware that this is the decade that brought us James Dean and Marlon Brando.

This is largely because the film is an inspired live-action cartoon, though its director, Tish-Tash, as he was known in the loony toon circles, despite very much being an animation veteran with Porky Pig to his credit, resented anybody for making too fine a point on this… like those over-intellectualizing French kids over at the Cahiers du Cinéma who revered him as a comic genius.

But it’s true. Every frame of the film is conceived by a visionary animation brain that, with the intense collaboration of a production designer, cinematographer, and color specialist, produced a visually stunning extravaganza of loony cinema full of cartoon depictions of entertainment industry heavyweights.

Take the film’s extravagant starlet, Jayne Mansfield, a proto-Jessica Rabbit send-up of the snowballing fame of Marlyn Monroe, or in Tashlin’s usage, of fame itself. Or her mobster boyfriend Fats Murdock, a proto-Fat Tony, who aims to muscle his gal into the music industry, played by an incredibly funny Edmond O'Brien.

Lastly, there’s Tom Ewell -- the “itchiest man in Hollywood”, as the trailer refers to him -- reminding the audience of his role as the neighboring horndog of Mariyn in The Seven Year Itch, and setting the stage for his own self-parodying send-up of the desire of the modern red-blooded 50s American male, i.e., the pinup gal consumer. He also plays a cynical agent tasked with turning the mob boss’ wife into the next Rock & Roll craze, which was considered the hottest soon-to-be-passing trend of the day.

This brings us to the glorious center of The Girl Can’t Help It jubilee: its almost accidental historical significance as the all-time best first-wave Rock & Roll film. (I would choose it over Jailhouse Rock, which came out a few months later, any old day.) Having consumed as many rock-exploitation indies as I’ve been able to get my hands on -- Rock Around The Clock, Rock All Night, Rock Rock Rock, Don’t Knock the Rock, Don’t Knock the Twist, Shake Rattle and Rock, and of course, Jamboree - it's no contest that the only entry in the tawdry genre to get the Hollywood treatment is by far the best.

Nevertheless, they all contributed to a seismic shift in the conception of the musical that, up until that point, only featured characters breaking out into song with a sort of Hollywood magic realism. The differentiating feature of the newly termed “Jukebox Musical” sub-genre was to incorporate its Rock & Roll organically into the story, giving it a reason for being. This new visual presentation of music not only paved the way for the best of cult musicals to come -- like future classics Phantom of the Paradise and Purple Rain -- but it's also fairly clear to see what a crucial step this was in the creation of the music video, which 20 years later would literally dominate pop culture.

But getting back to the Citizen Kane of Jukebox Musicals, hot damn is The Girl Can’t Help It boppin’! With gleeful performances from Little Richard, Fats Domino, Julie London, Eddie Cochran, The Platters, Gene Vincent, and a slew of no-names also included in the Rock & Roll crapshoot without any real knowledge of who would and wouldn’t stick -- looking at you The Chuckles! -- this film offers one of the all-time most influential soundtracks; perhaps most pivotally having exposed both The Beatles and John Waters to the fire of Little Richard. But while the music sequences alone make The Girl Can’t Help It well-worth its eternal salt, Tashlin's film, for which he also wrote the screenplay, is worth so much more. It’s also brilliant and hilarious.

Tashlin is clearly tickled pink by the place pop culture found itself in in the mid-50s and as such his piss-taking of the seedy Rock & Roll swindle makes glorious fun of the exhibitionist vulgarity of the new sexually charged craze. It’s a satire that, despite poking at the disposability of the fame product and the corruption behind the scenes that forces it into the forefront of popular entertainment, nevertheless can’t help but love it with an impish jubilance that makes the film a joy to revisit again and again… as the Rock & Roll clock takes us further and further away from that seemingly transitory yet evidently earth-shattering moment of 1956.

Speaking of rocking around the cosmic clock, sometimes the greatness of a film is enunciated by the greatness of the films it influenced. Such is certainly the case for The Girl Can’t Help It, which inspired not only John Waters’ signature Little Richard mustache but also his iconic fame-obsessed heroine Divine.

The film also gave David Lynch more than a few ideas for one of his career highlights, Mulholland Drive, which I would argue is at least in part a product of The Girl Can’t Help It in the same way that Blue Velvet owes The Wizard of Oz. It's certainly worth noting, however, that even Blue Velvet’s most emblematic moment borrows from the production design and costuming of the Abbey Lincoln performance in The Girl. As for Mulholland Drive, a film that features an actress referred to simply as ‘the girl’ being thrust into a major Hollywood production through mafioso means, look no further than its bopping opening credits for Tashlin’s direct influence.

Watching The Girl Can’t Help It through the eyes of these two spiritually-linked filmmakers, who thrive on infusing the hyper-ordinary with a surrealistic sense of the hyper-extraordinary, one particularly appreciates Tashlin’s photorealistic depiction of teenagers; one that Diane Arbus may have also appreciated.

Forgive this very roundabout way of introducing the Criterion package’s incredible supplements, the highlight of which offers a 20-minute interview with John Waters spelling out his love for the film and its importance in the world of Dreamland Studios. I’m always delighted when Criterion invites a filmmaker to celebrate an essential influence, so you can imagine my excitement for Criterion’s upcoming release of Pink Flamingos, which will offer a conversation with Waters and Jim Jarmusch!

The other highlight of the disc is a 30 or so minute video essay on “The Grandeur of CinemaScope”, which in addition to breaking down the history of the anamorphic process, also highlights the intense amount of thought put into the film’s color by Tashlin via Deluxe and a full-time color coordinator to lend the film a sumptuous visual flamboyance to rival the lush technicolor imagination of Douglas Sirk. Long before ‘event movie watching’ meant screens as high and wide as the eye could see, to further differentiate itself from the sneaking competition of the television set, The Girl Can’t Help It made visionary usage of color and the parameters of its new wide screen in ways the modern IMAX filmmaker would do well to study. The feature is a great and very dense history lesson that I’ll definitely be revisiting.

I’m sure I haven’t spent nearly enough time here discussing just how fascinating a figure Jayne Mansfield was, but there are two must-watch features that do a far better job than I ever could. One is a new interview with Eve Golden, author of Jayne Mansfield: The Girl Couldn’t Help It. The other comes from my favorite podcaster, You Must Remember This’ Karina Longworth.

If I were to delve any deeper into how thoroughly I enjoyed Criterion’s supplements for this package, we’d both be here all day. So let me quickly mention that the new conversation between WFMU DJs Dave “the Spazz” Abramson and Gaylord Fields about the music in the film is about as enjoyable a look into the context of the soundtrack as one could hope. And all of the archival footage -- featuring silent footage shot on set, a 50s TV interview with Mansfield, and an epic conversation between Little Richard and Merv Griffith in 1984 -- is simply divine.

Brought home with one of Criterion’s finest booklets, which includes an essay by critic Rachel Syme and, for the Blu-ray, excerpts from director Frank Tashlin’s 1952 book How to Create Cartoons (with a new introduction by Ethan de Seife, author of Tashlinesque: The Hollywood Comedies of Frank Tashlin), The Girl Can’t Help It will go down in the books as one of my favorite Blu-rays in the entire Criterion Collection.