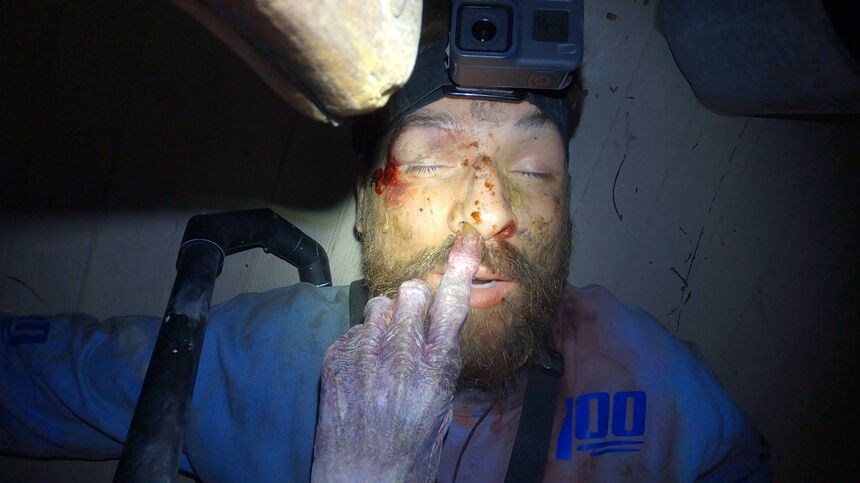 I hate it all.

So, when Deadstream, a film whose very premise both skewers and acts as a vindication of these seemingly talent-free forms of modern idol worship and egomania run amok, came across the desk as one of the selections in the SXSW Midnighters lineup, my eyes rolled so hard you could probably hear them from space. But, intrepid writer that I sometimes am, I decided to take one for the team and give it a whirl.

In a nutshell, Deadstream is the story of Shawn (Joseph Winter), a disgraced livestreamer attempting to comeback from multiple demonetizations after stunts gone awry by facing his greatest fear and spending a single night alone in the most haunted house in America (that he could shoot in for free). If he succeeds, he'll put himself back on the social media map and his career – such as it is – will be back on track. This is a horror movie, however, so you can imagine that things don’t exactly go to plan.

The Pratt House, a sufficiently creepy looking boarded up 19th century home in the middle of the woods. Before he enters he lays down the rules, which basically amount to the fact that he cannot leave before sunrise, he cannot receive any outside help, and he must investigate any creepy sounds or artifacts, failing to adhere to the rules will result in his sponsors withdrawing payment, and it’s back to the basement and another six months of ramen packets. He breaks in, padlocks the door behind him, and throws away the key, at which point he delivers the background on the house.

Once the home of a desperate poetess named Mildred, it was her suicide in the 1800s that began the house’s bloodthirsty streak. Nearly a dozen deaths later, the house was condemned and no one has lived in it since the ‘50s, though Shawn is far from the first person to attempt to prize free its secrets. Within minutes it becomes clear that the legacy of the Pratt house isn’t just a scary story, and Shawn’s night gets a lot more dangerous. Ghosts, spirits, and all sorts of ghoulies that go bump in the night are determined to keep him there and its going to take a miracle to get him out.

Written and directed by the husband and wife duo of Joseph Winter & Vanessa Winter, Deadstream could have been just awful. With the glut of found footage films in the wake of The Blair Witch Project – which Deadstream homages freely – the form oversaturated the market and burned out a decade ago. However, with the advent of the livestreaming YouTube celebrity, a new avenue was forged that hasn’t really been properly exploited until now. A mix of found footage and screenlife (think Unfriended), Deadstream is unique in that this footage wasn’t found, it was always meant to be broadcast to the biggest audience possible, and as word of Wrath of Shawn predicament spreads, that audience gets huge and becomes an integral part of the story.

The film balances Evil Dead style gonzo splatstick and painfully contemporary livestream interactivity in a way that not only provides Shawn with accomplices and assistants, but also brings the audience into the film as this was always meant to be a voyeuristic activity. Every few minutes Shawn checks the comments and responds, sometimes receiving very fortunate (and unfortunate) updates on not only his own condition in the house, but also the wealth of knowledge that the internet holds right at his fingertips through helpful viewers. Sometimes he heeds their advice, sometimes he doesn’t, either way, it always leads to another miniature bloodbath, much to our delight.

Deadstream wears its influences on its sleeve, and while The Evil Dead is clearly at the top of that list, there are also j-horror, Blair Witch, and countless other references jammed into its pacey 90-minute run time. This could – and should – be a chore. Winter’s Shawn is the kind of fast-talking jerk that makes me want to punch my computer in the face when I stumble across them on my own YouTube deep dives, but he’s just so genuine and gets an actual character arc and it really ends up working well. He’s not alone the whole time, he’s obviously contending with malevolent forces, but if Shawn doesn’t work, the movie doesn’t work, and thank god he does because it’s hysterical.

The entire film is livestreamed, but Shawn is not the only POV we see. He’s planned ahead and brings a number of GoPro cameras that he places strategically around the house that he can access from an iPad, essentially turning the tablet into a live edit suite. When he promises the most cinematic livestream event you’ve ever seen, he’s not lying. It’s a clever conceit and a great way to introduce the notion of coverage into what could’ve been a more traditional first-person film.

Everything about Shawn is designed to irk. But once that façade is broken by the genuine fear he feels, it turns out that he’s just a scared little prick with nothing else to offer, and maybe that’s okay. Annoying as he is, and as much as his fans love and hate him in equal measure, once he’s broken down you can’t help but root for him.

Tackling the cesspool that is for profit livestreaming was a risky move, but Deadstream captures its potential with gusto. Beyond creating a perfect host in Shawn, the script also does a bang-up job capturing the fickle nature of nerds behind keyboards, with the intermittent comment checks either fearing for Shawn’s life as things get really out of control or making sure he knows how bored they are and that they are logging off. It does devolve on occasion into live action videogame fetch-quest territory, but it’s easy to forgive small digressions given how much the film gets right. And frankly, genre film has gotten so issue heavy in recent years that it’s nice to see a movie that just wants to have fun and isn’t terribly concerned with the ramifications as much as the ride.

I hate all of it.

Do you feel this content is inappropriate or infringes upon your rights? Click here to report it, or see our DMCA policy.
Joseph WinterVanessa WinterGabe CasdorphMelanie StoneComedyHorror