Review: THE BURNING SEA, Fire in the Belly 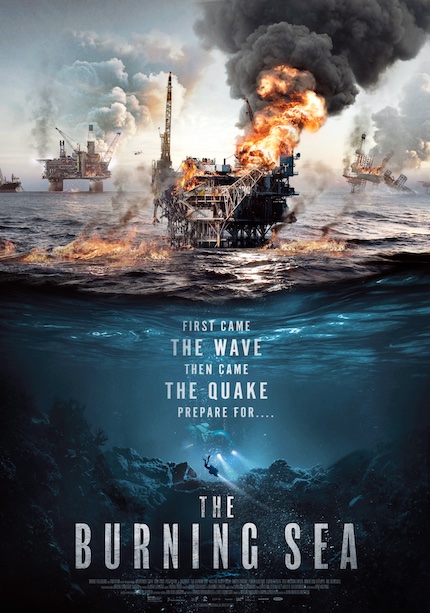 What looks like a calm and peaceful body of water soon reveals its (altered) nature.

The Burning Sea
The film is now playing in select theaters and is available on various On Demand platforms via Magnet Releasing.

Sofia and Albert are good friends and workmates.

They get along well and rely upon each other, which are vital qualities in their line of work. They are rescue operators, stationed at the edge of the North Sea in Norway, and can be called upon at a moment's notice to fly out into the sea to help any one of thousands of people who are working on the region's 350 oil wells.

Specifically, Sofia (Kristine Kujath Thorp) and Albert (Rolf Kristian Larsen) operate a submarine, which is used to examine areas of concern with the oil platforms deep beneath the water line. They are trained and prepared to do just that, so they react quickly when called into duty one day. The requirement that they sign an NDA (nondisclosure agreement) and are not told why their services are needed before they are hurried out to sea puzzles them until they are told that a platform has suddenly collapsed and they are to search for anyone who may have survived in an air bubble.

Things only get worse from there. Sofia and Albert survive an unexpected explosion, yet that turns out to be only a harbinger for a greater disaster that awaits.

Soon, scientists determine that a crack in the ocean floor has opened up and threatens an imminent and cataclysmic environmental disaster that could wreak incredible damage, destroying the oil wells, spreading oil into the sea, severely damaging wildlife and the coastline, and spreading well beyond Norway.

In the midst of this calamity, Sofia's boyfriend, Stian (Henrik Bjelland), an oil worker, is waiting to be evacuated. Sofia is waiting with Stian's young son when she learns that Stian has been left behind. What can she do to effect his rescue?

Directed by John Andreas Andersen, a veteran cinematographer (Headhunters) who helmed rocking disaster flick The Quake in 2018, and written by Lars Gudmestad and Harald Rosenløw-Eeg, the latter of whom wrote The Wave and The Quake with John Kåre Raake, it shouldn't be surprising that The Burning Sea follows a similar 'disaster-movie' formula, establishing its protagonists first before easing into whatever horrible thing lurks in plain sight. As someone who has seen and enjoyed many disaster movies over years, I always relish a perversely satisfying action-adventure that revolves around imminent and widespread destruction, the more outrageous the better.

Something about The Burning Sea has made me reexamine my viewing priorities, however. North Sea oil explorations began in the mid-1960s, leading to the discovery of a rich source of oil in 1969 and subsequent wide expansion of oil drilling platforms. Even though the film earns much of its popcorn appeal from the idea of a disaster, the fictional story that is told centers on just a few characters: Sofia, Albert, and Stian.

The melodramatic nature lends itself well to what unfolds: Sofia and Stian are contemplating a deeper romantic attachment, and Stian has a son. They are all good friends, and have a vested interest in each other's mutual survival; friends who are ashore are wracked with guilt over the role they may be asked to play.

I started biting my nails quite early. The pace quickens before too much time passes, and the tension grows deep. The movie is well worth a rental, at least.

Do you feel this content is inappropriate or infringes upon your rights? Click here to report it, or see our DMCA policy.
Henrik BjellandJohn Andreas AndersenKristine Kujath ThorpMagnet ReleasingNorwayRolf Kristian Larsen