Directed by Sebastian Meise, the film beautifully illustrates the genuine human connection, while examining the injustices done to generations of people who were persecuted just for being who they are. 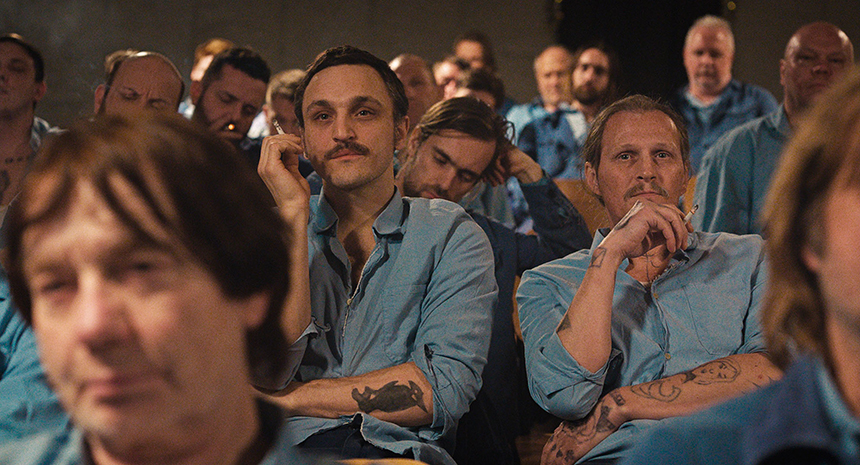 It's almost unthinkable now, in a free, democratic society that Paragraph 175, a provision of the German criminal law that criminalized homosexual acts, existed for more than a century, and was only abolished in 1994.

Austrian director Sebastian Meise tells the injustices done under such law and concentrates on a character with the camera firmly stationed behind the prison walls most of the time. Great Freedom showcases the immense talent of its star, Franz Rogowski, an actor best known for a recent string of films by Christian Petzold, including Transit and Undine, whose quiet demeanor and soulful stares communicate with the audience way better than wordy dialog. His portrayal of Hans, who frequents prison for just being who he is and living his life, once again proves that he is one the best working actors out there.

The film starts with surveillance camera footage of a seedy men's bathroom where homosexual sex acts are taking place. Hans (Rogowski) is seen taking part in that footage. It is documented that German police engaged in a surveillance program in public places to 'weed out' illegal activities in the SC and SC extensively.

As Hans is arrested and thrown in jail, his casual, self-deprecating exchange with the long term convict Viktor (Georg Friedrich) reveals that this isn't the first time Hans was in prison. The year is 1968.

After trying to protect a young gay man in a prison yard fight, Hans is thrown into solitary confinement. This also seems like a reoccurring theme. Meise uses these periods of solitary confinement and releases from it as temporal jump points to the past and back, highlighting the longevity and persistence of Paragraph 175.

Hans is seen being liberated from a concentration camp by Allied Forces, only to be transferred to another prison to serve his remainder of his sentence for performing homosexual acts. It's in this prison where he meets Viktor for the first time.

Viktor, a convicted murderer serving a long sentence, and an innate homophobe, first acts violently at the news that his new bunkmate is a homosexual. But over time, his hostility and aggression softens and he takes the younger, sensitive bunkmate under his arm.

Being an amateur tattooist, he even offers to cover Hans's concentration camp numbers on his arm. Hans can't help himself for falling in love with younger, vulnerable gay men being sent to prison. And they are always the target of prejudices and violence in a prison environment. Against Viktor's warning, Hans keep getting involved in fights while protecting his lovers and keeps getting thrown into an unbearable solitary confinement.

With the simple date titles, we go back and forth between three time periods. Over three decades, as the law remains the same, Hans keeps coming back to prison.

Meise puts a soft touch on these transitions rather than the actor's physical transformations, accentuating that time passes differently inside prison walls. The moon landing on TV doesn't have the same effect there as outside. The world keeps evolving, but the unjust, inhumane law is still prevalent. Rogowski's performance adapts to the passing of time, his silent expression and dancer-trained body language manifesting his emotional shifts from nervousness to volatility to resignation.

Friedrich, a veteran German actor, is also fantastic as Viktor, serving as a witness to the injustice done to his fellow inmate and friend, while contemplating his misdeeds as a young man. His sad and weathered face reflects our common humanity.

As talks about the reformation of the law continues, Hans finally gets a chance to be free. Would it be the last time he and Viktor will see each other?

Great Freedom beautifully illustrates genuine human connection, while examining the injustices done to generations of people who were persecuted just for being who they are. The film is also a great reminder, along with recent films like Audrey Diwan's Happening, that the rights we have gained (fairly recently) are not to be taken for granted, especially as the world is experiencing great fascistic conservative pushback from the right.

The film opens in New York on March 4 and in Los Angeles on March 11. A national rollout will follow. Please check the Mubi website for rollout dates.

Do you feel this content is inappropriate or infringes upon your rights? Click here to report it, or see our DMCA policy.
Anton von LuckeAustriaFranz RogowskiGeorg FriedrichGermanyMubiSebastian MeiseThomas ReiderDrama