Now Streaming: UPLOAD, The Future's Still Got a Few Kinks to Work Out 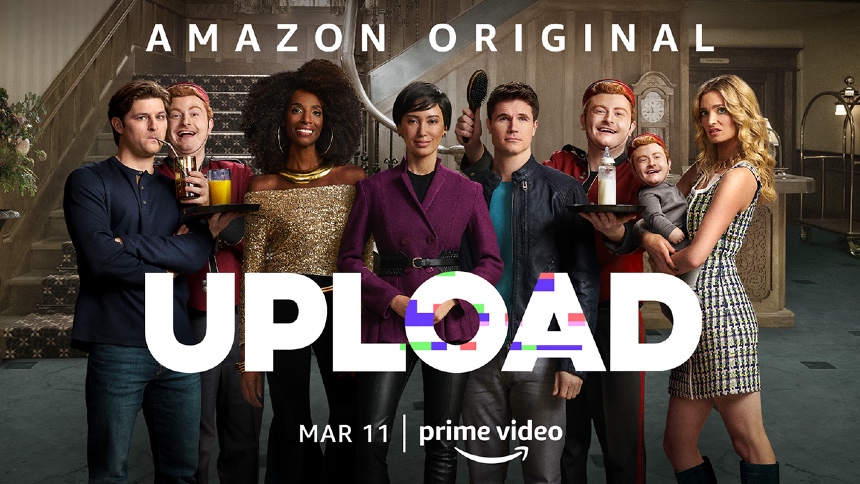 Upload
Seasons 1 is now streaming on Prime Video. Season 2 debuts in its entirety Friday, March 11. I've seen all episodes in Season 1 and Season 2.

Two years ago, Upload debuted as a welcome respite from the devastating global pandemic that was shutting down most public activities. Its view of the future was (mostly) bright and hopeful, holding out "the possibilities of romance, amidst an abundance of silly jokes and thoughtful meditations," as I wrote at the time.

Created by Greg Daniels, the show reflects his smart sitcom wit, as previously manifested in The Office and Parks and Recreation, which fills the near-future settings with a wealth of visual jokes and, in Season 2, enables multiple members of the cast to portray multiple variations of their characters.

The show's conceit is that "technology has advanced to a point where entire virtual-reality worlds have been created, places where wealthy people on the brink of death can transfer their consciousness into a body and live on, indefinitely, and/or until their money runs out," as I summarized about Season 1. In Season 2, new variations on this theme, as well as new characters with fresh perspectives, are introduced, making the show zip along even more pleasantly.

As always with any small-screen narrative series, the actors and their performances play a large role in deciding whether viewers will keep coming back for more. Again, Nora (Andy Allo) is the most appealing character. She has dealt with her personal grief issues, it seems, which means that relationship issues take priority, especially as she deals with lingering, loving feelings for putative protagonist Nathan (Robbie Amell), who seems to have left Nora behind as he reconciles with his longtime girlfriend Ingrid (Allegra Edwards).

Love is never that easy, though, especially in any narrative series that hopes to have a long life -- or afterlife -- in the future. The new season brings new romantic complications for Nora, as she draws close to independent activist Mateo. Other characters are fleshed out more thoroughly, and a few clever twists remain on the future of the virtual future that's been imagined by greedy corporations.

It's a fun show with a number of amusing asides. The length of each episode runs from 30-40 minutes, and so it plays well in a non-binge environment, for whenever you might feel like a burst of very pleasant, mostly romantic, nicely imaginative, sci-fi tech bashing.

Do you feel this content is inappropriate or infringes upon your rights? Click here to report it, or see our DMCA policy.
Allegra EdwardsAndy AlloPrime VideoRobbie AmellUS