Rotterdam 2022 Review: FREAKS OUT Is Fantastic 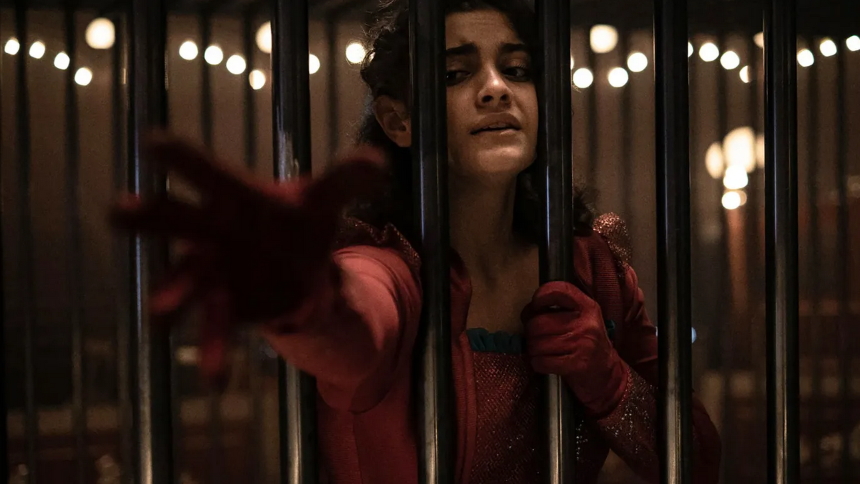 Back in 2016, Italian director Gabriele Mainetti won the audience award at the Amsterdam Imagine film festival with his excellent superhero drama They Call Me Jeeg Robot. In a world which started to be seriously oversaturated with superhero films already (remember, this was just after Batman v Superman: Dawn of Justice was released...), Mainetti's entry was fresh and full of real empathy. It caused me to say in my review: "...if this film truly jumpstarts a new age of Italian genre films, then Gabriele Mainetti has officially become my new superhero." Well... his latest entry Freaks Out just won the audience award at the International Film Festival Rotterdam, where people rated it a 4.5 out of 5. Amazingly, again it's a superhero film. Kinda. Sort of...

In Freaks Out we start at a small Italian circus in 1942, led by the elderly Jewish stage magician Israel. His performers are Mario, who is a simpleton who can attract metal, the albino Cencio who commands insects, strongman Fulvio who is covered with body hair (and played by Jeeg Robot himself, Claudio Santamaria), and Matilde, a girl who is always electrically charged and therefore wears gloves a lot. As the Nazi empire isn't a healthy environment for either freaks or Jews, Israel tries to get the troupe smuggled to the United States. But when he picks up everyone's travel papers, Israel is caught by the Nazis. Distraught, panicked, and seeing the Holocaust up close, the four freaks need to survive by themselves, and are tempted to join the huge German circus in Rome. 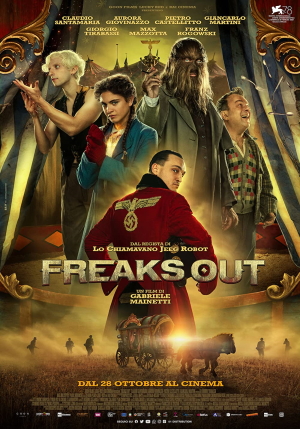 Unfortunately, that circus is run by Franz, a brilliant German twelve-fingered pianist who sometimes catches glimpses of the future, visions in which he sees Germany losing the war and his family condemned to death by the Nuremberg tribunal. Crazy with despair, he started the circus to build a Nazi super-squadron of powerful freaks, a weapon for winning the war as a present to Hitler. And Franz is very interested in our four freaks, as he has seen them in his visions...

By now you will have gathered that Freaks Out is not exactly a documentary look at Italy during wartime. But what it is, is a magnificent dark fantasy, a beautiful film, filled with clever gags, exquisitely detailed in its designs and bathed in warm colours. Director Gabriele Mainetti takes the intelligence, emotional maturity, social awareness and grit he showed in They Call Me Jeeg Robot, but it's as if he had Guillermo Del Toro on board as art director, and added Álex de la Iglesia to put in some extra adult content. I have no clue what his budget was here but it must have been huge, and in no way does the film aim at anything less than an R-rating. Visually rich, spectacular and long (at almost two and a half hours), this is a pretty epic and ballsy production.

Once again Mainetti gives us a few rough diamonds as heroes, flawed beings who have been treated bad by the world, people who have become emotionally damaged and suspicious by nature. They're no angels, each of them has traumas, and sex and violence are not avoided. But this is never played as a strength, a plus, or a funny aside. Instead, it shows the inherent sadness of being an outsider. But like in Jeeg Hero, this is all even more apparent in the villain. You cannot help but feel empathy for Franz, even though his deeds are often vile rather than just misguided. All of this is helped by decent acting from all involved, with the stand-outs being Franz Rogowski as Franz and a literally radiant Aurora Giovinazzo as Matilde.

A colleague called it "a nice movie for an Italian superhero Holocaust film" and he was absolutely right. It is as if someone decided to remake Duck, You Sucker, only taking place in the Second World War, and with several lower-key Avengers as the main characters. My only regret is that I wasn't able to catch it in a cinema, due to the Rotterdam Festival being on-line only this year. For me, this was the most beautiful film I've seen at the festival, grand entertainment, and I recommend it highly. 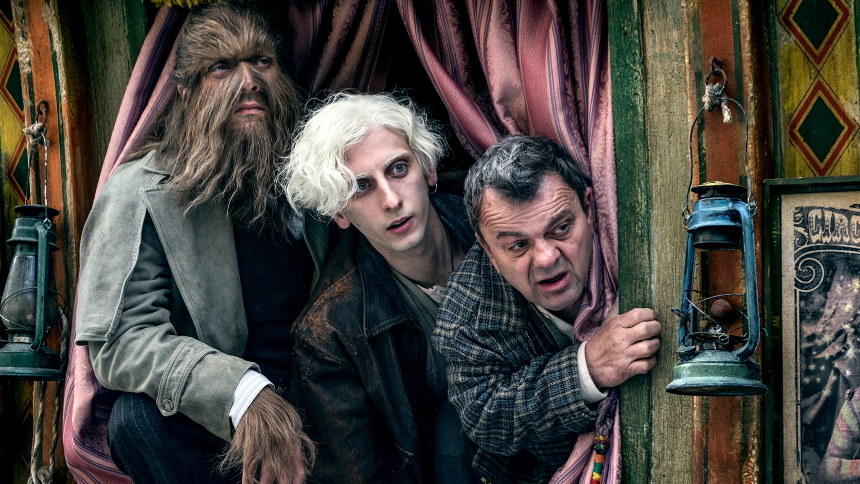 Do you feel this content is inappropriate or infringes upon your rights? Click here to report it, or see our DMCA policy.
Gabriele MainettiNicola GuaglianoneClaudio SantamariaAurora GiovinazzoPietro CastellittoAdventureDramaFantasy

More about Freaks Out