Review: THE SKY IS EVERYWHERE, Love, Loss and Everything Else 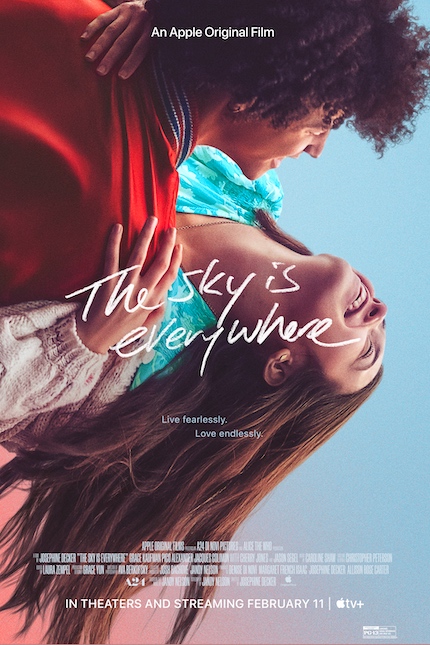 I wish nobody died.

The Sky Is Everywhere
The film will open Friday, February 11 in select U.S. theaters via A24 Films and will also begin streaming on Apple TV+.

Josephine Decker is a dexterous filmmaker, as well displayed in her simmering features, Butter on the Latch and Thou Wast Mild and Lovely; her lively portrait of a misunderstood teen, Madeline's Madeline; and the turbulent drama experienced by a misunderstood author in the superb Shirley. She shifts moods within scenes seamlessly, so that you can't help but fall under her spell, even if the subject at hand may not have appeared to be your particular cup of tea.

Even so, The Sky Is Everywhere might appear to be a serious left turn for the filmmaker. Adapted by Jandy Nelson from her own novel, first published in 2010, the premise of a teen who has just suffered the enormous loss of her slightly older sister might sound like fodder for an afterschool special. It practically screams its paperback categorization as a YA book. Yet in Decker's hands, the film quickly becomes something greater and more complex, capturing the essence of adolescence and the early stirrings of adulthood.

It all starts with the script, of course, and Nelson's words are innately beautiful and sound authentic coming out of the mouth of a 17-year-old person, the way she talks, texts, reasons, argues, cries, and dreams. Lennie Walker, portrayed by Grace Kaufman in an uncommonly layered performance, has grown up tightly attached to her big sister, Bailey, to the point that her identity is Bailey's Younger Sister. Lennie is happy to play that role, though, even as her musical abilities have already been recognized by her peers, classmates, and teachers. She looks forward to graduating from high school so she can go to Julliard with her big sister, who has been happy to wait a year so they can go together.

Lennie's plans are exploded when Bailey is unexpectedly struck down by a heart condition, dying on stage in a theatrical production. She never knew her father, and her mother left the scene some years in the past, leaving the two girls to be raised by their loving grandmother (Cherry Jones) and pot-smoking uncle (Jason Segal) in a forest-clad small town in Northern California. In the process, the girls drew as tight as twins, and Lennie is thunderstruck with grief at the loss of her best friend and constant companion.

Two weeks later, Lennie returns to school, where her teachers and schoolmates do not know what to say to her in her deepest stage of grief, not even her longtime friend. It's no wonder she senses a connection with her sister's boyfriend, Toby (Pico Alexander), who is equally, or more so, mired in grief. They get closer, probably too close, without truly realizing what they are doing.

In her grief, Lennie cannot bring herself to play her beloved clarinet in school, which makes everybody concerned, even new classmate Joe (Jacques Colimon), who is attracted to her personality, especially when she responds to his gentle offers of friendship. As they move closer together, Lennie tries to draw back from Toby, whose fragile emotional state leaves him extremely vulnerable.

Director Decker and cinematographer Ava Berkofsky masterfully capture the light and shadows and sun and scenery in a manner that makes The Sky Is Everywhere feel like a fantasy, which is ideal for the flights of fancy that the Lennie envisions, grounded by the characters, who seem entirely relatable in their dramatic actions and in their sometimes caustic, occasionally bawdy talk and texts.

Lennie, her friends, and her family all live in the same world in which we live, except theirs is cleaner and more lyrical. The film suggests that complete emotional healing is not only necessary, but also possible, which is an irresistibly appealing idea.