Review: SHAPELESS, The Horrors Of A Real Disorder 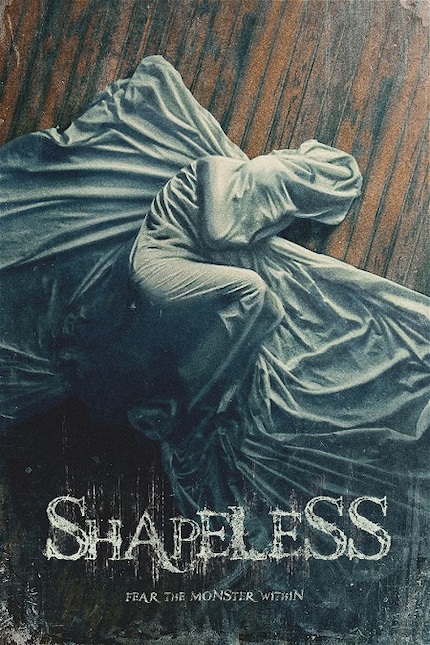 Body horror is a reliable subgenre for dread, discomfort and grotesquerie, and it can come in many flavors: Cronenberg-style shock tactics involving the melding of human flesh and high technology, just plain Lynchian weirdness, or, in the case of Samantha Aldana's Shapeless, unadorned real life.

This is a character study of Ivy (Kelly Murtagh), a New Orleans singer who, on the surface, seems to be living the life of any struggling musician: holding down a 9-to-5 job while spending nights with her band in tiny bars hoping to catch that big break. But Ivy has a secret, an uncontrollable eating disorder that slowly starts to take over her life, leading her down a very dark path.

Cue the horrific images of distorted, mangled flesh. But Aldana opts for toning them way down, relegating the grotesque aspect to a background detail; these flourishes aren't really necessary, since slowly watching Ivy succumb to a very real disorder is horrific enough. What these subliminal flashes do is put you in the mindset of a normal woman who can't control her own impulses. It's a deep dive into a very disturbed psyche, and it's not pretty.

Credit to Kelly Murtagh for committing to a tough role; Ivy's simultaneously a victim and, as her condition worses, someone overwhelmed by her own dark side, and Murtagh is unafraid to make her unpleasant, visibly uncomfortable while speaking to her band or doing the groceries. To further make things more uncomfortable, there's barely any supporting cast to speak of; Ivy's bandmates, including a potential love interest, are merely footnotes in her own story. The focus is entirely on the singer, but one can't help but think that having more people to bounce off of her would have gone a long way towards making us feel more for her situation or at least understanding it better.

But providing a sympathetic portrait is most likely not Aldana's goal, and neither is providing a cautionary tale about eating disorders. The movie is shot like a horror film, all shadows and dark lighting, appropriate for a story set in and around New Orleans blues dives, complete with a jarring, atonal score which might sound familiar if you've seen a lot of A24 trailers. Ivy's descent into desperation certainly fits the bill.

Not a lot actually happens during Shapeless; Ivy isn't given an out, and while the movie does try to provide some minimal hope that she'll pull through, it's more about portraying a person having to deal with these demons on a regular basis and either succumbing or just keep going forward in spite of it; pretty much like real life.

This is not a pleasant film, but it's an original and stylish way of approaching subject matter which would have made for a tear jerking, feel-good Movie-of-the-Week in any other context. While it's more of a character piece that fits its own title, at the very least Murtagh's committed performance is enough to catch the attention.

The film is available today on Tubi TV and will open tomorrow, February 11, in select U.S. theaters.

Do you feel this content is inappropriate or infringes upon your rights? Click here to report it, or see our DMCA policy.
Bobby GilchristJamie NeumannKelly MurtaghSamantha AldanaUSXYZ Films