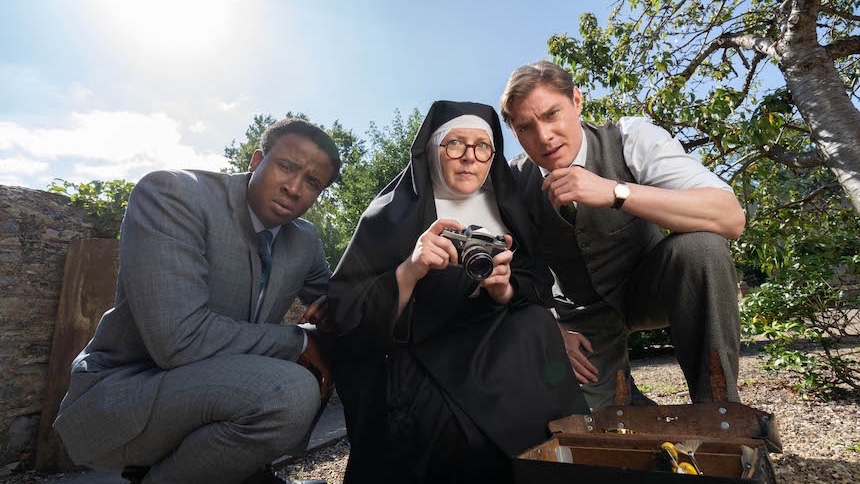 And now for something completely different: light-hearted fun about murder most foul.

First seen reading an Agatha Christie mystery novel, Sister Boniface (Lorna Watson) proved herself to be a ready complement to a crime-solving Catholic priest (Mark Brown) in Father Brown, though the character only made one guest appearance in the first season of the popular series, currently in its ninth season and now streaming on BritBox.

Jude Tindall wrote the original episode in which she was featured early in his own television writing career; he subsequently created the mystery series Shakespeare & Hathaway: Private Investigators, which is also now streaming on BritBox, and now returns as writer and producer of the new series. Sister Boniface puts a bright and inquisitive face on the crimes that she is tasked to investigate as Science Advisor to DI Sam Gillespie (Max Brown) and newly-arrived DS Felix Livingstone (Jerry Iwu) in Great Slaughter, a bustling village in the lovely and scenic Cotswold district of Gloucestershire, England.

Created by G.K. Chesterton in a series of stories that were first published in 1910, Father Brown is an enduring figure who has served as the inspiration for at least four feature films and multiple television shows. In his most recent incarnation, set in post-war Britain in the 1950s, Father Brown is a bicycle-riding fellow who loves treats yet loves solving mysteries even more, never hesitating to poke his nose into police business, to the consternation of local law enforcement. He also has a strong streak of righteousness and never hesitates to brow-beat or guilt-trip suspects into confessing their crimes.

In contrast, Sister Boniface Mysteries picks up in the 1960s, sometime after the Vespa-riding Sister Boniface has demonstrated her investigative value to DI Sam Gillespie, who is quite grateful for her assistance, due to her scientific background, which is briefly explained in the first episode to DS Felix Livingstone, who, by error, arrived in the village from Bermuda. By the conclusion of the first episode, we are also introduced to police officer Peggy (Ami Metcalf) and several local villagers who are more than happy to help investigate, including landlady Miss Thimble (Sarah Crowden) and newspaper editor Ruth (Miranda Raison).

It's a cheerful group of people who surround Sister Boniface. What marks the series as a welcome addition to the world of lighthearted mysteries are the clever variations from what works quite well in the Father Brown series. Thus, Sister Boniface is her own person with her own identity, following her own crime-solving instincts, and deftly helping the men around her to draw the correct conclusions.

The other characters are also different and distinct, even though they initially resemble characters from Father Brown: Gillespie is grateful for Sister Boniface's help, rather than resentful; Livingstone is ready to make the best of his situation; Peggy is sharp rather than clumsy; Miss Thimble is malleable rather than inflexible; Ruth is clearly capable of more than what she is doing. The characters feel authentic for the time and place in which they are living, yet that doesn't limit their insights or intelligence.

For a lighthearted show, Sister Boniface Mysteries is surprisingly deep.

Do you feel this content is inappropriate or infringes upon your rights? Click here to report it, or see our DMCA policy.
BBCBritBoxJerry IwuJude TindallLorna WatsonMax BrownUK