Now Streaming: KIMI and THE GIRL BEFORE Cast Enthralling Spells 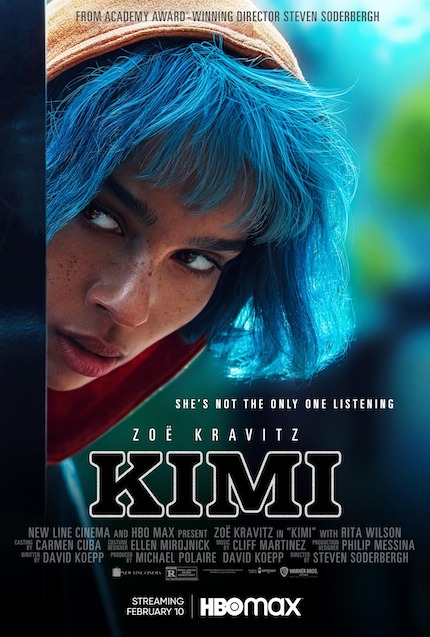 What's love got to do with it?

A cleverly-constructed original screenplay by David Koepp lays a solid foundation for a sterling performance by Zoë Kravitz, which is enhanced by Steven Soderbergh's stylish photography, snazzy editing, and propulsive direction.

Kravitz plays an agoraphobic woman in Seattle who works from home as a video stream technician for a voice-assist service known as Kimi, listening to and clearing bugs in the software that have been reported by users. One day, she detects troubling snippets of conversation that sound like a crime being committed against a woman, which quickly draws her into an ever increasing pool of trouble.

Coming from Koepp's impressively fertile imagination -- he's scripted wide-appeal blockbusters, as well as adult-oriented thrillers -- the plot may sound familiar, though rest assured that the writer has neat tricks hiding up his sleeves, which will not be revealed until the appropriate moment. Combined with Kravitz's abundantly appealing performance as a strong woman who is determined to deal with her own problems in her own way -- 'thank you very much for your offer of help, but no thanks for patronizing me' -- and Soderbergh's many skills as a filmmaker, Kimi is a well-crafted rollercoaster that threatens to break your neck frequently and repeatedly.

Strap on for a wild ride that flies by.

The Girl Before
All four episodes are now streaming on HBO Max. 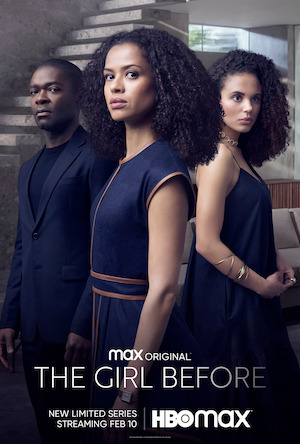 Content to take its time to set up its story, The Girl Before nonetheless is quick to engage and slow to let go.

Gugu Mbatha-Raw portrays Jane, a highly-accomplished woman in London who is seeking a change in her life after a personal tragedy. She applies to live in a striking home, designed by famed minimalist architect Edward (David Oyelowo), which comes with a large number of stipulations about what is and is not permitted in the home.

Her story is told simultaneously with that of the home's previous residents, Emma (Jessica Plummer) and Simon (Ben Hardy), a young couple who are seeking a change. Well, at least Emma is seeking a change after a personal tragedy; soon enough, she de-couples from Simon and begins a relationship with Edward.

Meanwhile, three years later, Jane settles into the home and begins a relationship with Edward, even as she wonders what really happened to Emma, who died under questionable circumstances, and Edward's wife and child, who died sometime before Emma and Simon.

Adapted by J.P. Delaney and Marissa Lestrade from Delaney's novel, and directed by Lisa Brühlmann (the very good 2017 feature Blue My Mind, as well as episodic television shows), The Girl Before is expertly tailored for binge viewing, as questions about motives and action become ever more gripping as the story progresses.

All four lead actors are excellent in their roles; Gugu Mbatha-Raw is superb, as usual, and so is David Oyelowo. The discovery for me was Jessica Plummer, since I've never seen the serial EastEnders. Her character foreshadows and matches that of Mbatha-Raw's character; the brilliance of the series is that each actress brings vivid life to roles that are similar, but not quite the same.

Given the quality of the performances, the production, the writing and direction, watching each episode is a pleasure. It's not your typical four-episode mini-series.

Do you feel this content is inappropriate or infringes upon your rights? Click here to report it, or see our DMCA policy.
David OyelowoGugu Mbatha-RawHBO MaxSteven SoderberghUKUSZoë Kravitz