Blu-ray Review: WRITTEN ON THE WIND 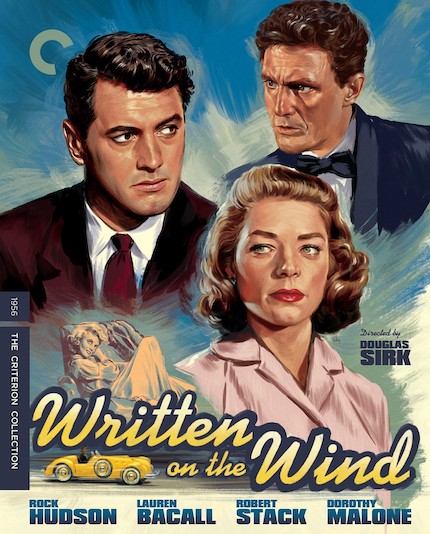 Watching Written on the Wind was my first introduction to the famous auteur of the melodramatic, Douglas Sirk (Imitation of Life, Magnificent Obsession, Hitler’s Madman). The 2K Blu-ray restoration is out now via the Criterion Collection.

Sirk was a German filmmaker who fled the country when he was approached by the notorious Joseph Goebbels (Nazi war criminal and the German Minister of Propaganda) to make the films that Leni Riefenstahl ended up working on. There’s more to that story that’s both sad and tawdry; check it out if you have interest in this strange intersection with world history and cinema.

Sirk became known for exploring the kind of daily ugly realities that bubbled beneath a bright, polished veneer, a gauntlet later picked up by fellow filmmaker and master, David Lynch.

Written on the Wind is one of Sirk’s most famous films, due to its thematic material as well as its stars, Rock Hudson (Seconds, Dynasty), Lauren Bacall (The Big Sleep, To Have and Have Not), Robert Stack (Unsolved Mysteries, The Untouchables series), and Dorothy Malone (Peyton Place, Basic Instinct).

Essentially, we follow a hyper-rich oil Texas family, notably Kyle Hadley (Stack), his best friend Mitch (Hudson), and Lucy (Bacall) who’s wooed away from Mitch by Kyle in the very beginning of the film. A whirlwind romance ensues and the alcoholic Kyle is so happy that he becomes sober. All the while, Mitch longs for Lucy, with whom he does have a connection, as Kyle’s carefree and irresponsible sister Marylee (Malone) pines for Mitch.

As you can see, it’s a love quadrangle, which always leads to an eventual, awful mess. In Written on the Wind, you can see that things are headed for disaster from frame one, but with a film like this, it’s the journey, not the destination that keeps us watching. The pace is fast for the time and the film rockets towards both tragedy and redemption (for Marylee).

Technicolor paints everything in highly saturated hues, while the decay of love, trust, family bonds, and friendship all decay beneath the shiny exteriors and the lavish, human shells within the melodrama.

No doubt that Written on the Wind was seen as tawdry at the time of its release, but it’s also a spot-on socio-political satire in which gender norms and the upper class are skewered, which I really appreciated and enjoyed.

The restoration leans toward heavy grain and in many scenes, particularly toward the beginning of the movie, crushed blacks. But this film is quite old and we must accept that all restorations cannot be pristine. Sound is excellent.

I really liked watching the interview in which film scholar Patricia White discusses the film, Sirk, and the time in which it was made, in addition to the archival interviews with Sirk, his cast, and his producer Albert Zugsmith. The past can be so fascinating.

Overall, I found Written on the Wind to be a very interesting capsule of American cinema, particularly for excesses, pressures, and pleasures placed on people within a certain demographic.

To watch a trailer and add Written on the Wind to your home video library, go to Criterion's page for the film here.

Written on the Wind